Sometimes in life we take ourselves too seriously, we work hard, save hard and worry too much.
I know of a secret cure for that, a way to realize what is really important, something that will make you smile, and never let you stop.
I know a way to get rid of those worries, let loose from the routine, and experience what the world is providing for us. And that (not so secret) remedy is to TRAVEL. 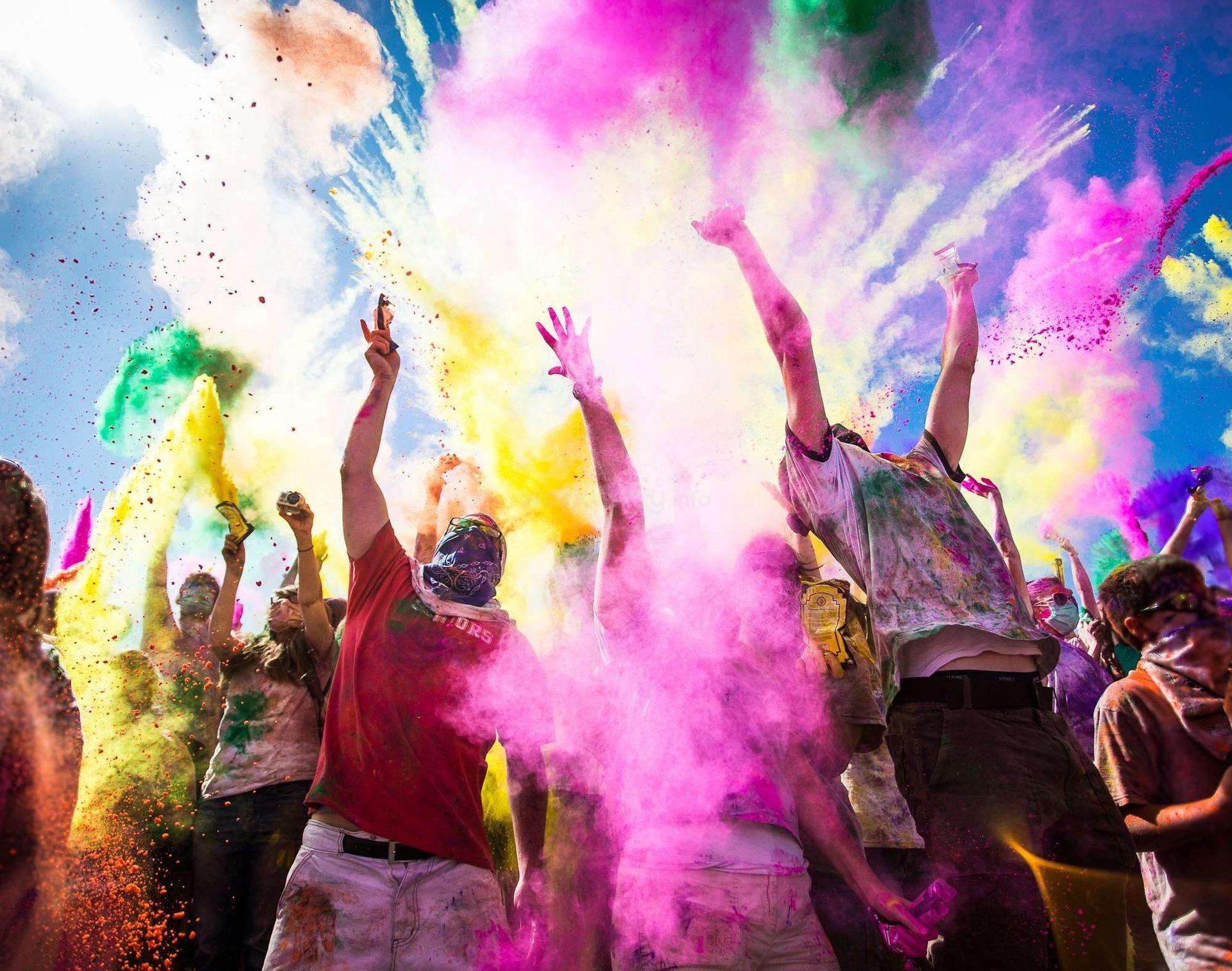 Now, don’t just take it from me, there are hundreds of festivals set up all around the world for that exact reason; to make you SMILE! So let’s all smile along together and discover some of the best gatherings around the globe: 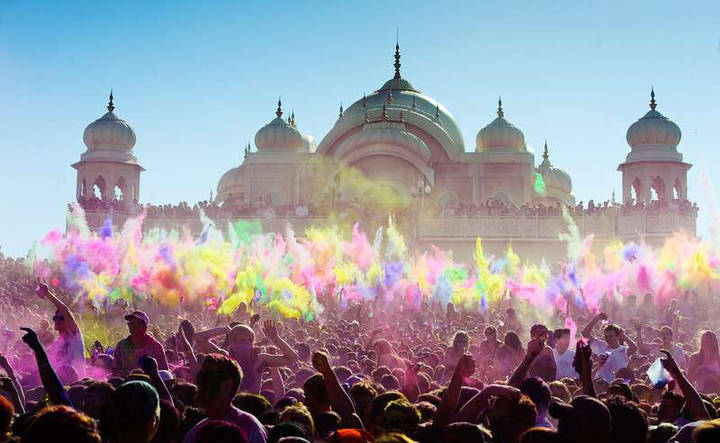 A festival that celebrates the victory of good over evil and a celebration of the arrival of spring and harvests to come. It’s the festival of colours, emotions, and, of course, happiness. Try throwing tons of coloured powered over each other and not smile.. Go on, dare you!
When? Beginning of March (View host list in India…) 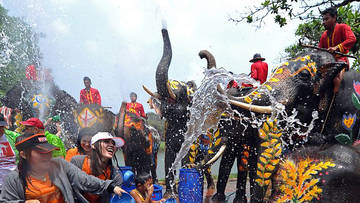 The Songkran Festival celebrates New Year’s Day in Thailand, as well as many other countries in South and Southeast Asia. Songkran AKA the world’s biggest water fight is a day full of laughs and happiness. April is Thailand’s hottest month, so there couldn’t be a better time to get out those water guns and go and spread cheer along those slippery streets.
When? Between the 13th and 15th of April each year (View host list in Thailand…) 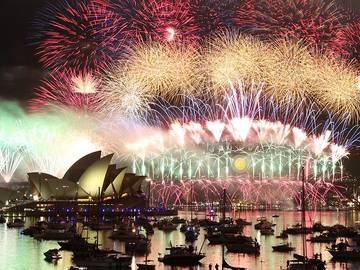 Sydney New Year’s Eve is an annual multi-tiered event held every New Year’s Eve over Sydney Harbour, Known as the best place in the world to see the New Year fireworks display, there’s nothing quite like sipping on some champagne and witnessing the new year approaches in style!
When? 31st December (View host list in New South Wales, Australia…) 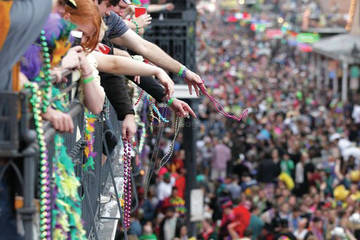 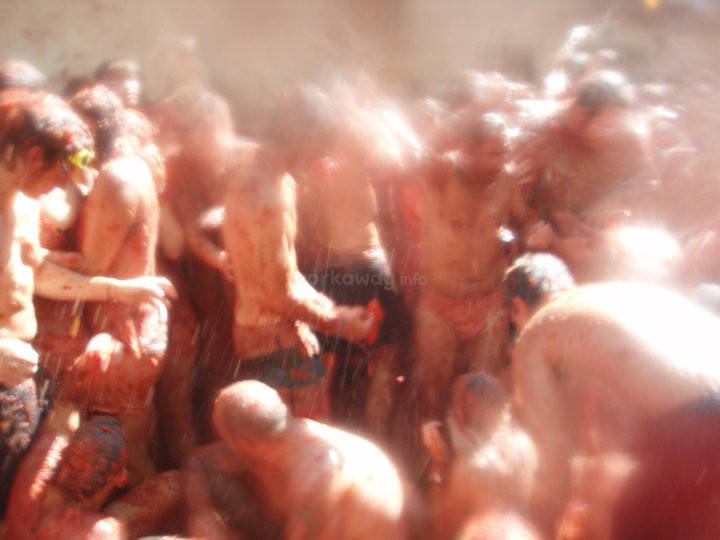 With no real origins of La Tomatina, it comes down to basically just an awesome 3-hour long tomato fight! Thousands of people flock to this tiny Valencian town each year to throw tons and tons of tomatoes on each other, for really, no reason at all!
When? Last Wednesday of August (View host list in Valencia, Spain…) 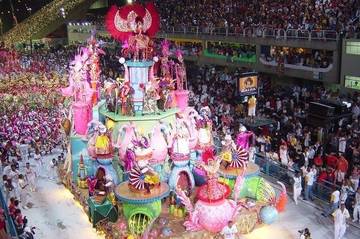 Dance to the beat of the Rio drums with thousands of other carnival go-ers all wearing colourful clothing and masks. One of the greatest elements of Rio Carnival is that it not only provides entertainment for many people around the world, but it also gives a chance to learn about the true culture of Brazil. Carnival is very important to the Brazilians, it sums up their way of thinking and way of life. And we like their way of thinking. So get involved.
When? Festivities begin on the Friday before Ash Wednesday (View host list in Brazil…) 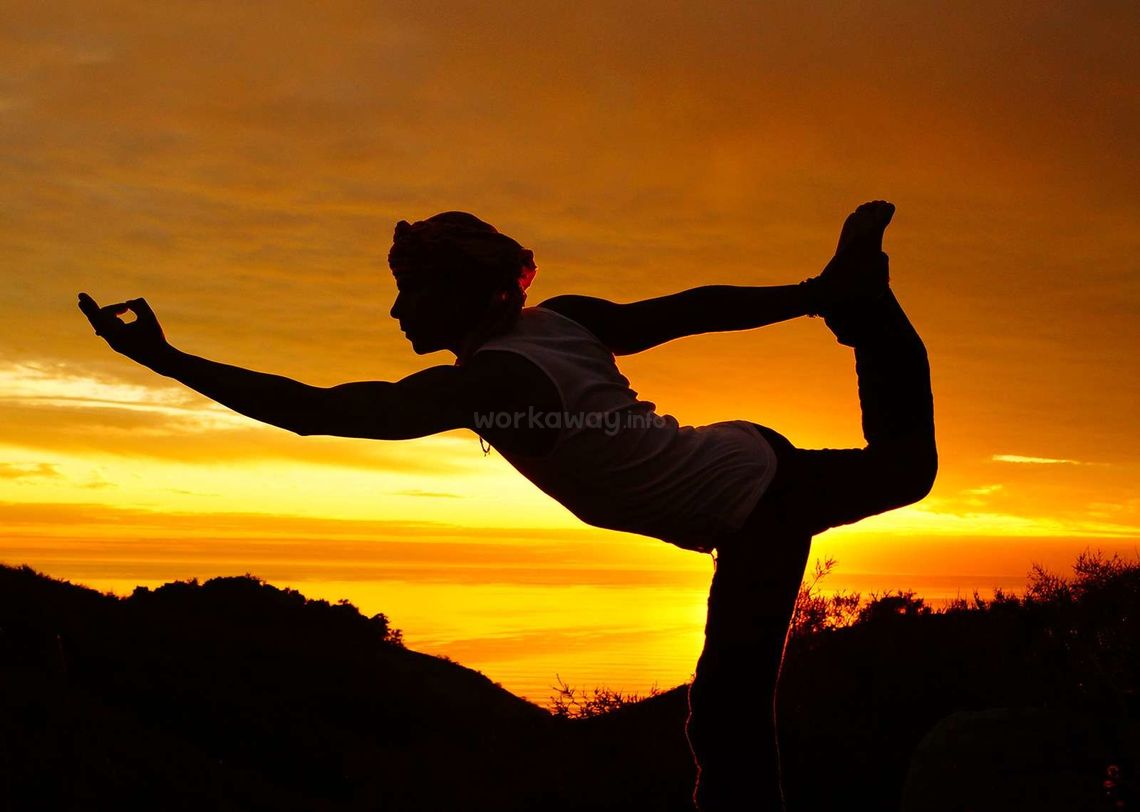 Wanderlust festival’s mission is to teach you to eat well, be green, practise purpose, create awareness and showcase art. It is the ultimate detox for your mind and body. Head over to Hawaii and enjoy 4 days of relaxation, yoga, surfing and white sand. We can already imagine ourselves there…
When? Between February and March each year (View host list in Hawaii…) 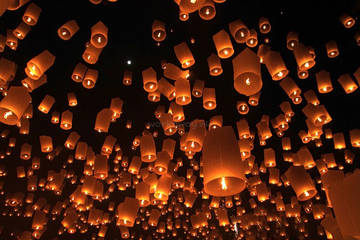 Thousands of lanterns are let off into the sky of Taiwan each year to (As legend has it) let others know that the town is safe. The Tainan Yanshui Fireworks Display (beehive of fireworks) is also celebrated to ward off evil and disease. No disease, no evil, just light and sparkles. ✨
When? Between February and March each year (View host list in Taiwan…) 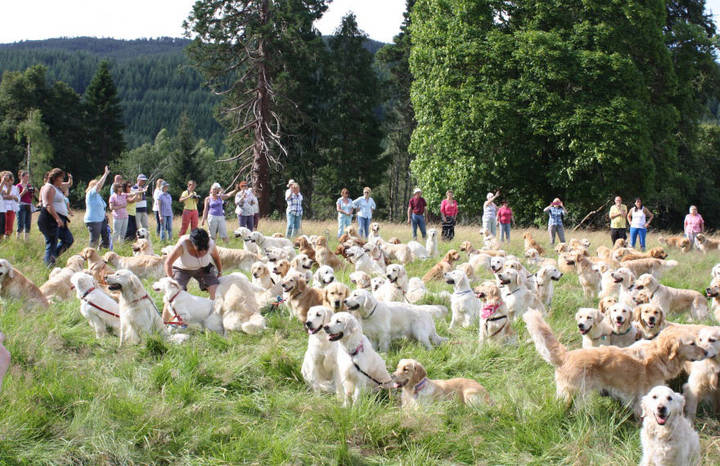 Yes, you did read that right. A festival full of golden retriever dogs! Now going into its 14th year, this quite possibly could be the cutest festival around. Picture this; hundreds of golden retrievers (may we just add PUPPIES too) wagging their tails in a glorious Scottish meadow, purely just to make you smile. Where do we sign up (wait, does anyone have a Golden Retriever we could borrow?)
When? July each year (View host list in Scotland…) 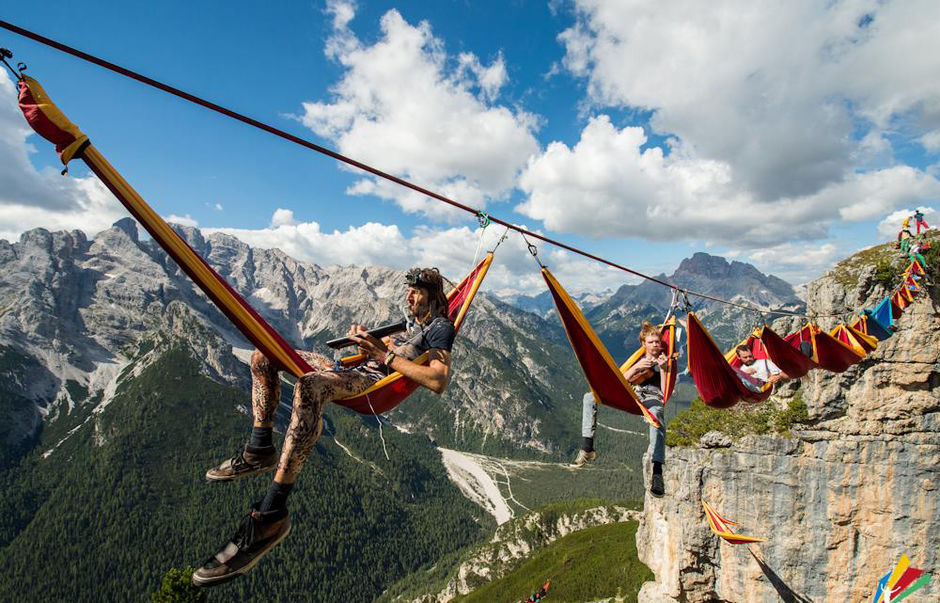 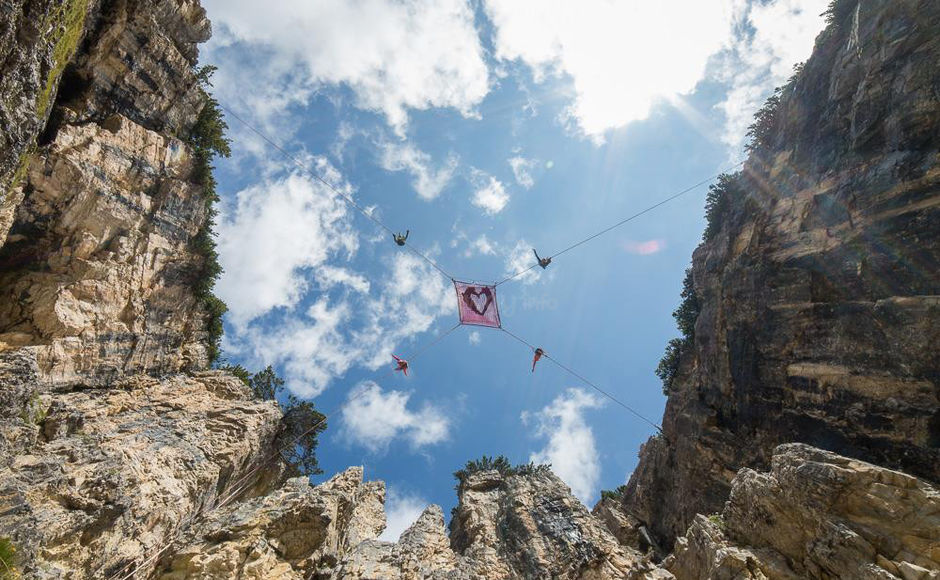 This last one is for all you extreme wanderlusters out there. From a line secured between 2 mountains lie hammocks, with people in them, dangling from the sky. In fact people don’t just hang out in mid-air, they sleep there too. But it doesn’t end there, other (trained) daredevils take to walking the slack line, completely unaided. All in the name of wanderlust we say!
When? September each year (View host list in Veneto, Italy…)

Alicia helps run Workaway mission control in Hong Kong, she's also our social media and blogging whiz and helps with design. She has backpacked, travelled and volunteered extensively in many differen... show more...t parts of the world. She started Workawaying in 2012 and now has joined our team to help with hosts and development in Asia. She speaks English Spanish, Cantonese and Mandarin as well as a smattering of other Asian and European languages. Based in Asia, when not travelling you'll find her in a dance studio or watching some film you've never heard of! "I love how the countless opportunities and adventures found via the site can really inspire and open up the imagination to a real world of possibilities. It is my insane way of keeping my sanity! The best part of working at Workaway is being able to witness how it has helped so many people, both hosts and Workawayers, to create their own lives; reaching out to their dreams and inspiring others to do the same."

View all posts by Alicia

Join Now
Categories
Travel PhotosWorkaway NewsTravel StoriesHost of the MonthWorkawayer of the MonthInspirationTravelling TipsUsing WorkawayWorkaway AmbassadorWorkaway Foodie
Latest Posts
Teaching in Morocco: an immersive experience in a bucket-list destination 10 Of The Cheapest Countries In Asia For Budget Travellers Practical tips on how to teach abroad as a volunteer Travel differently, discover more: Authentic farm stay experience in Catalonia 7 ways we can universally give back as travellers

6 Magical Workaway places to experience the festive season abroad
Volunteering & Working Opportunities: Crew / sail around the world for free
10 of the most AMAZING Workaway experiences!
Ecotourism: lessons from our Thai jungle adventure
8 inspirational Workaway locations which nurture the artist in us!
12 great yoga experiences for travellers around the world