Help us with our small organic vegetable garden and general maintenance of the house in Northern Catalonia, 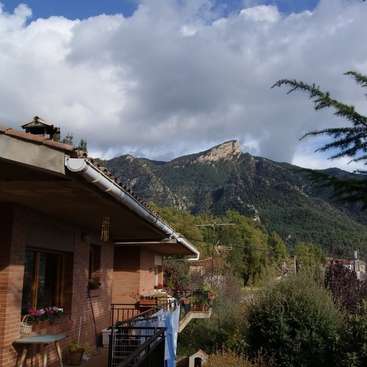 We were originally staying for two weeks, but we ended up staying for 9 days, since they had other visitors scheduled. We worked 8 days out of 9, which is probably our only comment (in their profile they mentioned max 4-5h, 5 days a week) and never proposed a day off until we requested it. To be fair, we arrived at a time when there was a heat wave during the first few days, so we would work until midday. We would also work during the evening (excluding one or two days) We did gardening, cooked, we brought soil from the forest, we mixed sand and cement to help the other worker, and we helped maintain the house as we were told.

Overall, we learned a lot about political, environmental and social issues and worked in a cozy organic garden managed with care by the sweetest woman.
They also took us for a nice walk in the woods when the heat was bearable. And to the beautiful water reserve nearby. That's why we assure you that you will enjoy the stay. We can only recommend to ask for the schedule first to avoid misunderstandings as not everyone works comfortably under the same conditions.

Thank you very much, Josep-Miquel and Imma, we really hope to meet you again some day. We thank you and encourage you to continue with your projects, because as we mentioned above, they are much needed.

(Excellent )
06/08/2018
Left by Workawayer (Jennifer & Federico) for host
Oh how we miss these wonderful people!!! We had an absolutely beautiful time with Imma and Josep-Miquel. They are amazing people who we only hope we can be like some day. They are superb hosts, mentors, conversationalists, human beings...we cannot wait to come back and see them as soon as we get a chance. As our first Workaway, they were an… read more impossible act to follow. After our six days with them, we deeply missed our long conversations over fabulous dinners thanks in great part to other wonderful guests that we coincided with on our visit, Chaumay and Vincent and little Tafan (spellings?!). We will be back to visit at our very first chance!!! Abrazos ENORMES de Jen Fede Iris y Lunita! PS Hope your garden is going wonderfully!
You can only contact Workawayers who have an active membership.
(Excellent )
15/07/2018
Left by host for Workawayer (Jennifer & Federico)
This family is terrific! They came for 3 days and finally stayed 6. Amazing experience to share our lives with them and they helped us a lot! Hard workers, mega friendly. We miss them and we highly recommend to host them.
(Excellent )
17/09/2017
Left by Workawayer (Jessica) for host
Imma and Josep-Miguel are wonderful people! I enjoyed my time in the beaufitul mountains of Catalonia a lot. They made me feel at home very fast and I enjoyed lovely meals, walks and talks with them! I mostly worked in the garden and I learnt a lot about organic gardening!! They have a very inspiring life style!
Thanks a lot to the two of you! I… read more hope to meet you again :)

You can only contact Workawayers who have an active membership.
(Excellent )
23/07/2017
Left by host for Workawayer (Jessica)
Although she is quite young she is very responsible and hard worker. She was a great help in starting the kitchen garden for us this Summer. She was willing to learn and fast worker. We enjoyed walks together and it was great to have her with us. We really enjoyed. We hope to meet you again!!!
(Excellent )
27/07/2017
Left by Workawayer (Gamze) for host
Imma and Josep-Miguel are very nice, enjoyable and helpful couple. Meeting them was wonderful for me, I felt myself at home. I enjoyed and learned many details about organic garden and culture of Catalonia. I really like their life style; foods was nice ( Miguel’s breads specially:), landscape was great (hiking with Imma was wonderful!) and… read more conversation with them was enjoyable, what I learned will be benefit for me.
Thank you very much for everything. I hope that we can see each other again!
I recommend everyone workaway with this warm, experienced host and such a beautiful landscapes.

(Excellent )
23/07/2017
Left by host for Workawayer (Gamze)
She is a reliable person, ready to learn new things and happy to give a hand in any job requiered. She enjoyed the work in the garden, cooking an cleaning. It was a fantastic experience for us to host her and we learn more things about Turkye and the political and economical situation there. She practisses ioga and has given us a little… read more introduction to it.
She was curious to know about politics here too. We enjoyed conversations with her. We hope to meet you again!!!

(Excellent )
23/07/2017
Left by host for Workawayer (Juliane)
Julia is a commited person who enjoys being helpful. Ready to give a hand and to learn more about gardening. She was a great help and also willing to talk and discuss about several topics. Very sociable and able to do team work. We hope to meet you again!!!
(Excellent )
23/07/2017
Left by host for Workawayer (Maggie)
Maggie is a fantastic workawayer. She was ready to work in the garden and did the job at her best. She has also help in making leaflets for projects. Excellent work! We really enjoyed hosting her and the walks and conversations together. We hope to meet you again!!!
(Excellent )
18/09/2016
Left by Workawayer (Alejandro & Alicia) for host
Simply awesome! Imma and Jose Miquele are amazing, they are travelers and dreamers full of pasion and smiles to share. We enjoyed and learnt a lot with their organic garden, Imma's tomates are a masterpiece!! also you will be delight with the beautiful view they have from their house. Their mindset are truly friendly with the enviroment with solar… read more panels, and rainwater harvesting. The food is just a dream! They cooked with their own garden products and a lot of traditional catalonia dishes, always great talks, interesting and with tons of knowledge to share!!

Certainly this is everyone's house! we also met Imma and Jose Miquele's friends, from many places and are extremely kind and friendly. This place is a good place to improve your language skills, specially for Spanish and Catalan (They speak several others!).

Thank you for share with us the Catalanian cultue, food and landscapes. We learnt a lot from you, as well! For us being there was really inspirational for our lives!!

Meet persons like you give sense to our trip and inspire us to continue this adventure. We'll be back, for sure and we'll be waiting for you in Colombia. We hope to see you soon!


(Excellent )
06/09/2016
Left by host for Workawayer (Alejandro & Alicia)
These couple is simply fantastic!!! Energetic! friendly and hard working, with lots of initiave and in love to each other. We have learnt a lot from them, from Colombian cuisine to Cryptocurrencies!!! passing through the political situation in their country (their stay with were during the same days of the Peace agreement). Now we have new friends… read more in Colombia! If you are a host, do not hesitate to welcome them!
(Excellent )
30/08/2016
Left by host for Workawayer (Pol & Anna)
Pol& Anna are great. We have enjoyed their first experience in WA with us. They were very helpful in mending bits and pieces around the house and the garden. Despite the generational gap we found so many things in common wit them and issues to talk about. They are so sociable...We strongty recommend other WA hosts to take them. We wish them a lot… read more of succes in their coming trip to South-East Asia. Good luck and enjoy life!!
(Excellent )
05/08/2016
Left by host for Workawayer (Leonardo)
Leo es muy amable y terriblemente bien educado. Estuvo con nosotros unos días y nos echó una mano ordenando el garaje, en el huerto y haciendo limpieza general. Al principio lo encontramos un poco "raro", pero nos gustó mucho su franqueza y creo que su estancia entre nosotros y las conversaciones que mantuvimos también le sirvieron para aclarase… read more un poco en lo que quiere hacer con su vida. Al menos así lo deseamos. Que tengas mucha suerte!!
(Good )
31/07/2016
Left by host for Workawayer (Jacqui)
It was great to have Jacqui and Hannah. They helped us by setting our watering system in our vegetable garden and other little jobs. They worked very well and we enjoyed sharing meals and conversations with them. We hardy recommend the carrot cake they ade for us, it weas very nyamy! Imma enjoyed the evening suwmming with Jacqui in the water… read more reservoir nearby. We felt very confortable with them and we recmmend them to other possible hosts. Enjoy life!
(Very good )
13/07/2016
Left by Workawayer (Jacqui) for host
We were only a week with Josep-Miquel and Imma and really enjoyed our stay with them. They are a lovely couple and made us very welcome. We helped finish off the irrigation system, clearing weeds and helping at meal times. It's very hot so a swim in the nearby reservoir is very welcome and the view is from picture postcard scenes. It would be… read more lovely to visit again some time. Thank you.
(Excellent )
31/07/2016
Left by host for Workawayer (Adam & Olga)
Thanks Adam&Olga!!! we are very grateful for your help. You worked really hard. You were very organized and willing to do any thing that was needed. We enjoyed your company and the Polish meal you cooked for us, nice chats and the "mushroom's knowledge" exchange. You showed fantastic attitude for traveling with workaway, willing to try new food… read more and joining everyday life and working independently Good luck and be happy!!
(Excellent )
30/07/2016
Left by Workawayer (Adam & Olga) for host
Imma and Josep-Miguel are incredible. Meeting them changed our view on people. They let us experience Catalonia: the food, the landscape, the mentality. We helped in refit one of their room, in renovation of windows and shopping. Conversation in the evening was beautiful culmination of a day of hiking and working. We recommend everyone workaway… read more with this host, for us it was one of the best time in our lives.
You can only contact Workawayers who have an active membership.
(Excellent )
Please log in and visit this profile to leave your feedback.
Host ref number: 379154987743
Homestays, Volunteering & Working Holidays in SpainHomestays, Volunteering & Working Holidays in EuropeHomestays, Volunteering & Working Holidays in CataloniaFamily SpainLast minute Homestays, Volunteering & Working Holidays in Spain
To contact a host, please login with your username and password or register with workaway.info.
My host list0
Give the gift of Workaway
read more

Help in renovating an old town house with a panoramic view and huge garden in Guanajuato, Mexico

Be a part of our family and help us with Child-sitting and gardening in Lower Saxony, Germany

Looking for some help in our garden in a little village in le canton de Vaud, near the city of Lausanne, Switzerland
(27)

Seeking young person to help a family in Oakland CA! We are also looking for Japanese person to tutor our children.
(10)