When we heard about Fenia’s story we knew it was one that needed to be shared. With a dream of starting her own permaculture farm, she didn’t let the role of being a single mother stop her. She swapped the rat race of hectic hospitality for life on the road with her son, Adam, in the belief that there is no better classroom than nature.

Discovering Workaway motivated Fenia to learn as much as she could about farming from 10 different hosts around Europe with the hope that one day, she will become a host on her very own farm.

Travelling with a toddler may terrify some, but Fenia’s courage and refreshing approach to motherhood will guarantee to inspire. In our chat, she shares her tips, highlights and hopes for the future. 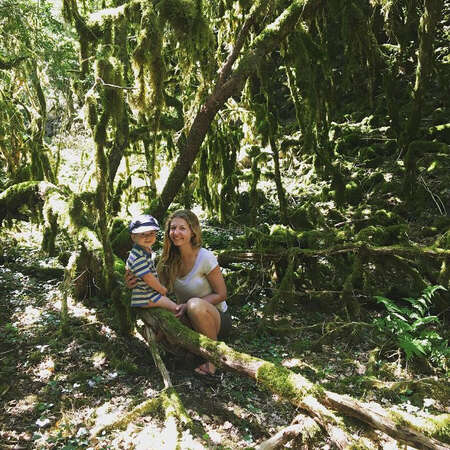 Where are you based at the moment and how are you finding it? Are there COVID-19 restrictions?
Fenia:
We like it here in Greece, it's our home country after all. I am considering starting a farm, which was my original plan but I'm not sure if I'm going to do it here. Safety in Greece, is not the best, it's not that bad either but for a single mom with her child there are maybe better places.
About COVID, we're currently in lockdown. We have been in lockdown for around two or three months. It's quite tough but there are things to do in the house and we can go for walks so we're enjoying time together.
How did you discover Workaway?
Fenia:
When I was left as a single mom, I was thinking, what do I want to do with my life? I wanted to go to Denmark so I started sending applications for culinary jobs but they weren't accepting me. So, I then thought maybe it's better if I just go to the country and live there, but how could I because life was so much more expensive.
Then I thought I should volunteer and that’s when I came across Workaway and I decided to go for it. My original dream was always to start a farm, so when I came across farm volunteering opportunities, I knew I should do that. 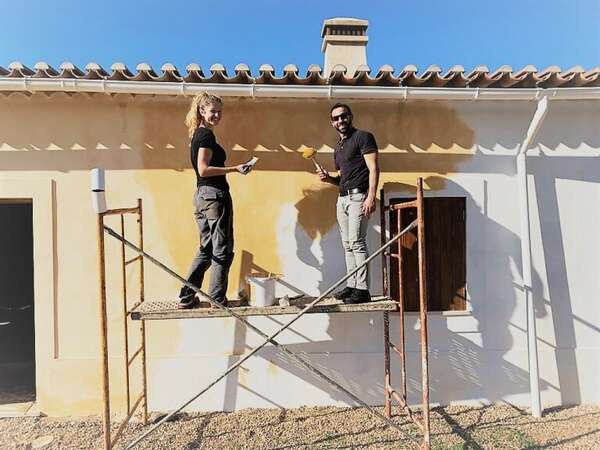 You were joined by your son, Adam who was only 18 months. I wondered how your friends and family reacted when you decided to take him on a Workaway. Were they supportive or apprehensive?
Fenia:
I am raising Adam by myself as we're not in touch with his father so my parents found it a bit weird at first. They were quite shocked when I said I'm going to live abroad but I have lived on five continents since I was 18 years old and didn't want to stop travellling even now I have a child.
What would you say is the biggest challenge of travelling with a toddler?
Fenia:
It was a difficult thing to do for sure, mainly because Adam is so active. He won’t sit in one place so you have to constantly watch, in case he could fall into lakes or catch him from running off, things like that. However, it was an unforgettable experience and especially now that we have these memories - it's amazing.

Is there a particular highlight that stands out from your memories?
Fenia:
They were each so different. We stayed with 10 Workaway families  within a year (around a month with each one) and every family had something different to offer. That was always my plan because I really wanted to learn everything I could about farming to start my own farm in the future. So, I did a Workaway with one that had chickens, then someone else had goats, someone had vegetables and others had different crops.
The one experience that I would say was the best for me was a farm that just had crops actually and while I really wanted to have some farm animal work experience, the farm was very levelled so there were no risks for Adam which made him so cooperative and helpful. It was amazing. They also had a river on the land and sometimes we would just go for a swim after the work. 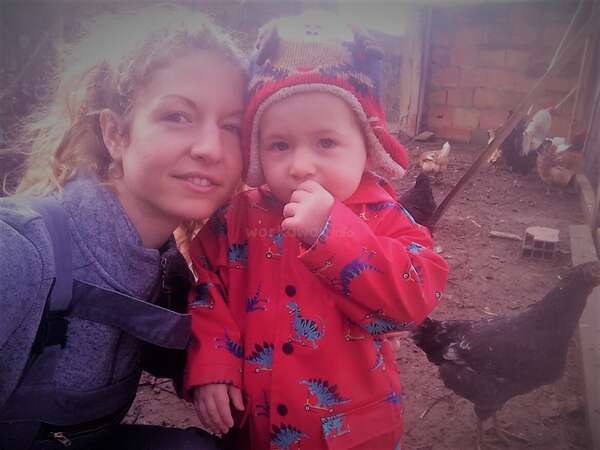 Which country was in?
Fenia:
It was in Spain, in Catalonia. Around one and a half hours from Barcelona. 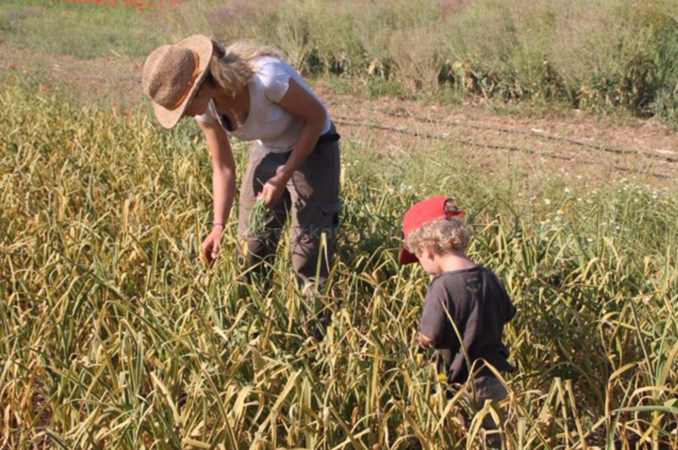 You can read all about Fenia’s Workaway experience in Catalonia during Covid-19 on her blog!

Do you have a dream destination or a dream Workaway? Is there somewhere that's number one on your bucket list that you hope to go to one day?
Fenia:
I'm not sure I'm going to volunteer because I'm going to start my own farm and instead I am going to host Workawayers. It will probably be in Greece or maybe Portugal.

​​​​​​​I would also really like to visit Africa one day. My dream was to visit all seven continents but so far I’ve only visited five because Adam was born. I would really love to visit Africa.

Is there any advice you would offer other parents who are thinking of doing Workaway with their children? Maybe for those who are a bit nervous or don’t know how to approach hosts. Have you've got any tips or advice?
Fenia:
If you want to travel with your child, however small he or she is, just go for it! It's going to be difficult, I'm not saying it's easy, but it's worth it.

For me, the best way to approach a host is to always be personal. You have to send a personalized message and just tell the hosts why you want to go there and what can you offer. At the end of the day, I also think it has to be balanced giving and taking - the host offers room and board so the volunteers have to contribute some hours of help in return. Some hosts are more flexible than others but I think you just have to let them know what you can offer and why you want to go.

Did you find did any hosts ever say no? Or did you find that most people were quite open with you having a child join you?
Fenia:
There were a lot of hosts that said no but maybe because I sent so many applications. I found especially in Spain there were hosts that said no because I had a child.
Out of the 10 families that I stayed with, there were only two that didn't turn out to be quite as what I expected. One was actually because the host was afraid to let me try things, for example, I couldn't do the difficult work tasks, like carrying tree logs, or something like that. Then I couldn't really help in the kitchen because he wanted to do the cooking.
The second was because Adam didn’t get on with the host’s toddler so that was quite tough. We both decided it would be best for me to leave and move on. However, most of the hosts were very, very nice with Adam and they would play with him and would be very understanding of his needs, for example, we could have breastfeeding sessions and they were fine with it.
How old is Adam now? Do you think he will remember your trip?
Fenia:
He is three years old. We travelled from when he was one and a half until two and a half years old, and he remembers where we were in June last year (we were in France). 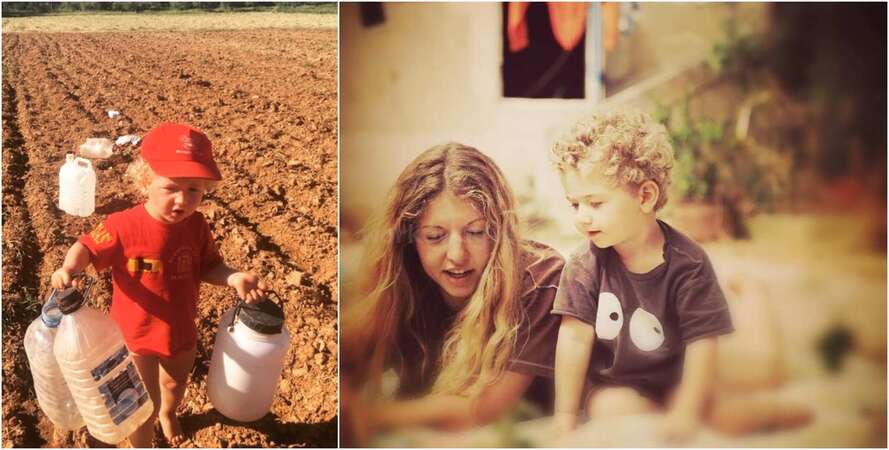 Aww when he grows up he’ll want to join Workaway too!
Fenia:
Yes, he’s very sociable! The trip has made him so sociable. With this whole experience, he just comes up to people on the street and talks to them and wants to hug them (well not so much at the moment ha!).
I wish you the best of luck with your farm wherever you decide to set up and hopefully, we’ll see you as a host on Workaway soon!
Fenia:
Thank you, I’m hoping within two or three months! 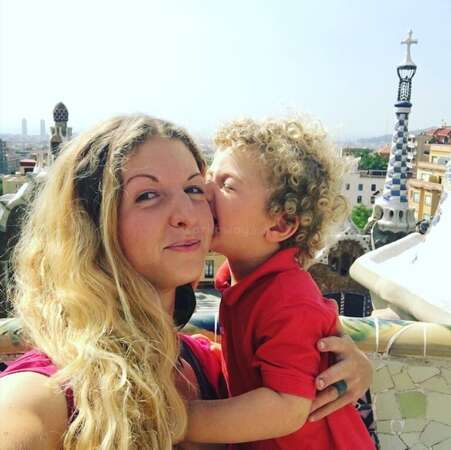 To learn more about Fenia’s farm plans, take a look at her Kickstarter campaign!

Whether you’re interested in heading off grid to learn about permaculture or considering taking your little one a big adventure, we hope Fenia’s tips and positivity has inspired you. Too often people assume Workaway is only for solo travellers or students, but stories like these show that regardless of age or background Workaway welcomes everyone in the belief we all have something to share and something to learn.

Want to learn more about travelling in Europe with a toddler? Fenia also has a blog where she shares her Workaway experiences, recipes and motherhood tips: