Let your tastebuds travel: How to make Hummus – the authentic way

Let’s be real, one of the most enjoyable things about travelling (and life!) is all the new food you get to try. And what’s even better is to learn how to make traditional dishes from locals, so you can relive those amazing travel memories bite by bite once home. In our new ‘Workaway Foodie’ blog series, food-loving Workawayers will share how they have learnt about foreign cultures and communities through their food. And yes, we will also be sharing one especially tasty recipe at a time, so your taste buds get to travel as well! Over to Workawayer Malou, who knows the secret to making authentic and irresistibly delicious hummus:

I discovered how to be vegan at this Workaway eco-community somewhere in the middle of Israel that is as ramshackle as it is beautiful. Set up under a canopy of trees and surrounded by the beginnings of a permaculture-inspired food forest, this place is foodie heaven! I turned up in December and found orange, grapefruit and pomelo trees in full fruition, passion fruit tendrils climbing up walls and vegetables sprouting up in seemingly random locations. 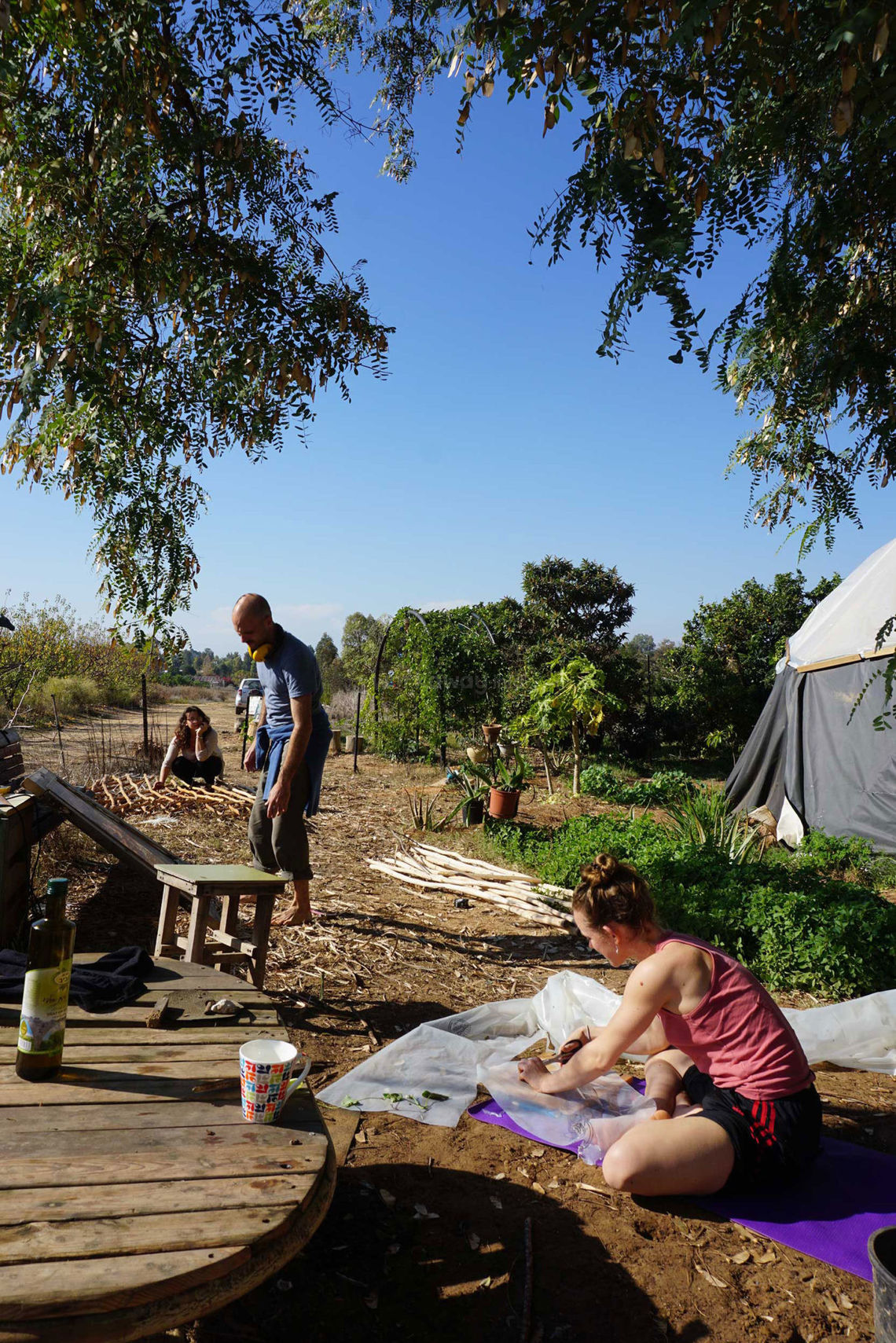 I came for a two-week workaway and spent it planting and harvesting veggies, building yurts and cooking meals with both the community residents and a bunch of volunteers. The kitchen was strictly vegan, but nobody seemed to mind. I’ve realised being vegan is ridiculously easy to do in a country where avocados, dates and almonds quite literally grow on trees. And where, of course, hummus is a meal unto itself.

Go anywhere in Israel and you’ll find hummus served straight up with wedges of raw onion, pickles and pitta for dipping. No messing around with carrot sticks, these guys are purists who argue over who make it best. Of course, hummus isn’t strictly Israeli either – it’s said to be originally from Egypt, later adopted by much of the Middle East as the dip or spread of choice.

Back at the workaway eco-community, we made hummus by the bucketload, blitzing up chickpeas with tahini, lemon juice, garlic and cumin, and scooping it up with homemade bread; the perfect snack. Every evening, we crowded around the table for a vegan dinner. Hummus often appeared, either as a side or the main event, topped with roasted Jerusalem artichokes (straight from the garden), sweet potatoes and other root vegetables, charred red peppers and garlicky mushrooms or, my own favourite, a simple drizzle of home-grown olive oil, pomegranate molasses and za’atar. Quick and incredibly delicious. 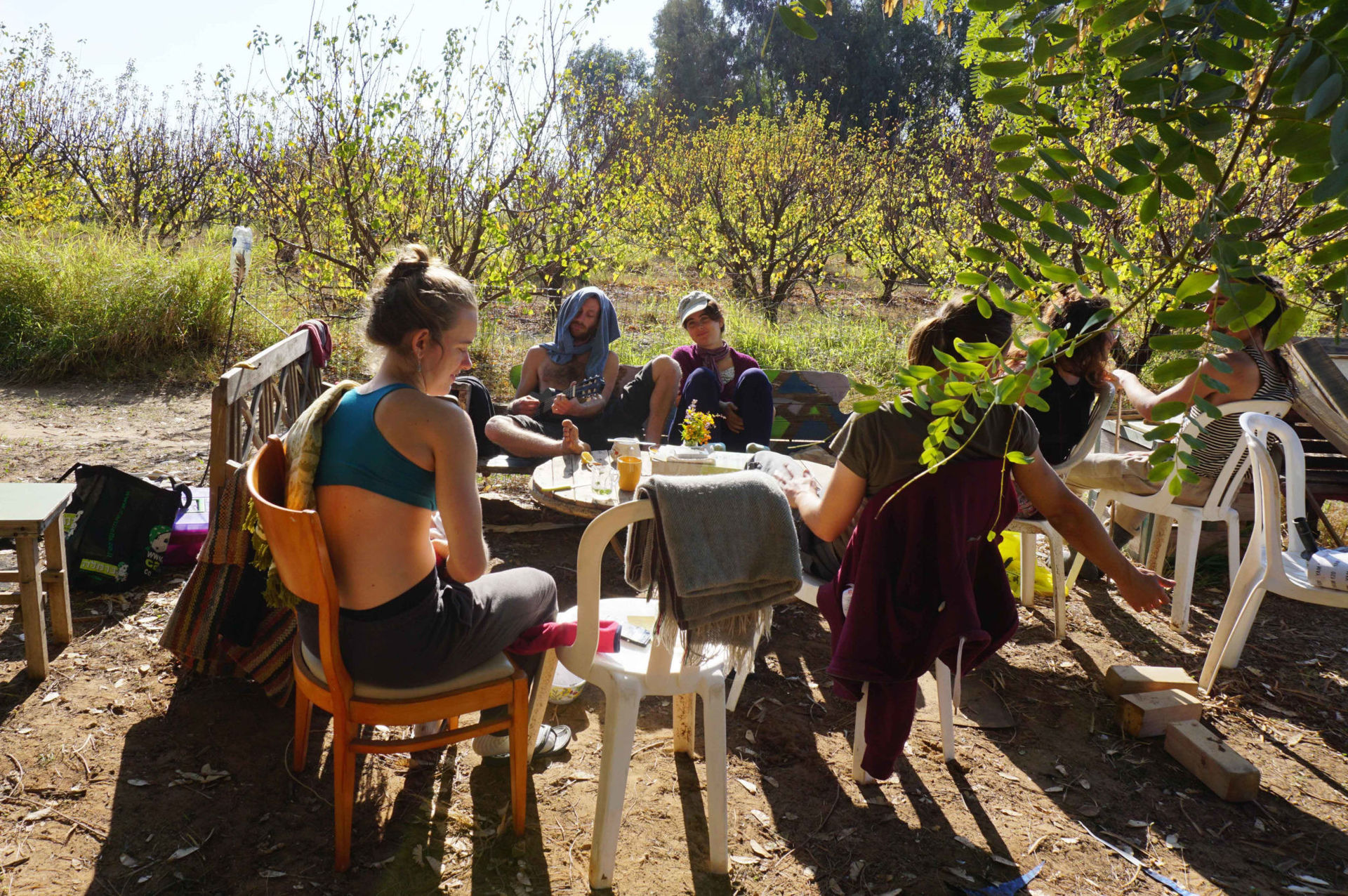 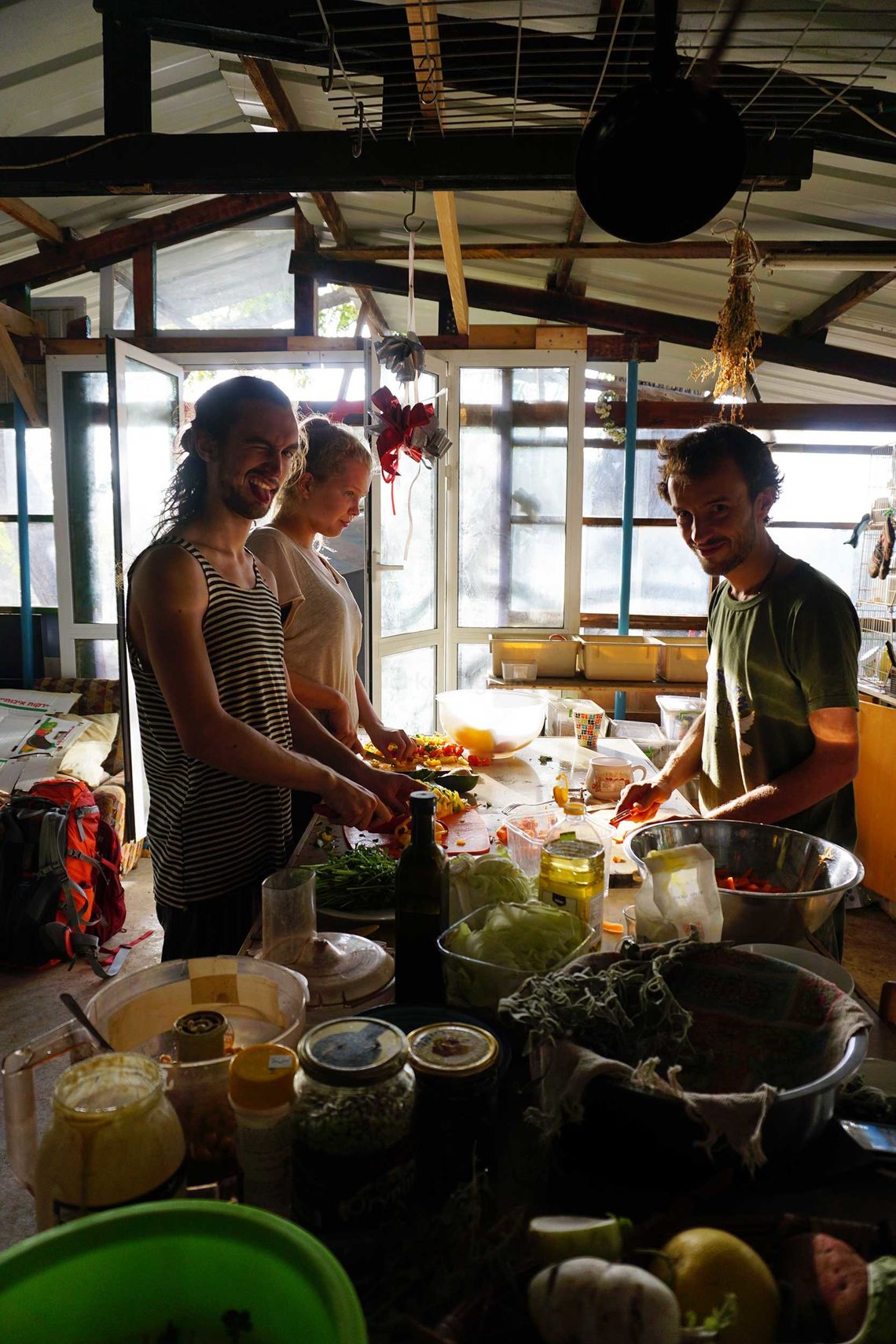 After dinner, we’d lounge about the mud-house dance studio. A large, beautiful room, warmed by a makeshift stove, where evenings would launch into impromptu dance or yoga lessons. Someone would inevitably come in with a pot of wild sage or mint tea and, as the nights wore on, we’d retire to a sleeping bag beside the smouldering fire. It was picture postcard stuff. A place of chilled vibes, friendly souls and good food.

I rarely eat hummus now without thinking about this beautiful little place, and I rarely buy it ready-made. It’s just so much easier (and cheaper!) to make yourself. You can use a tin or jar of ready-cooked chickpeas but if you cook them from their dried form, make sure to simmer them until really really tender. You can add a teaspoon of bicarbonate of soda to the cooking water to help speed the process along.

The trick is in how you serve it. Ask anyone in the Middle East how they top their hummus and you’ll get a thousand answers; a drizzle of good olive oil or a sprinkling of paprika, sumac or za’atar, maybe some chopped parsley, pine nuts or a dollop of spicy coriander relish. Some prefer a hard-boiled egg, whole chickpeas glistening in oil or chunks of lamb or minced beef, spiced heavily with cumin and perhaps cloves, allspice and cinnamon. Hummus, I learnt, can be both quick dip or the base of a delicious meal in its own right. 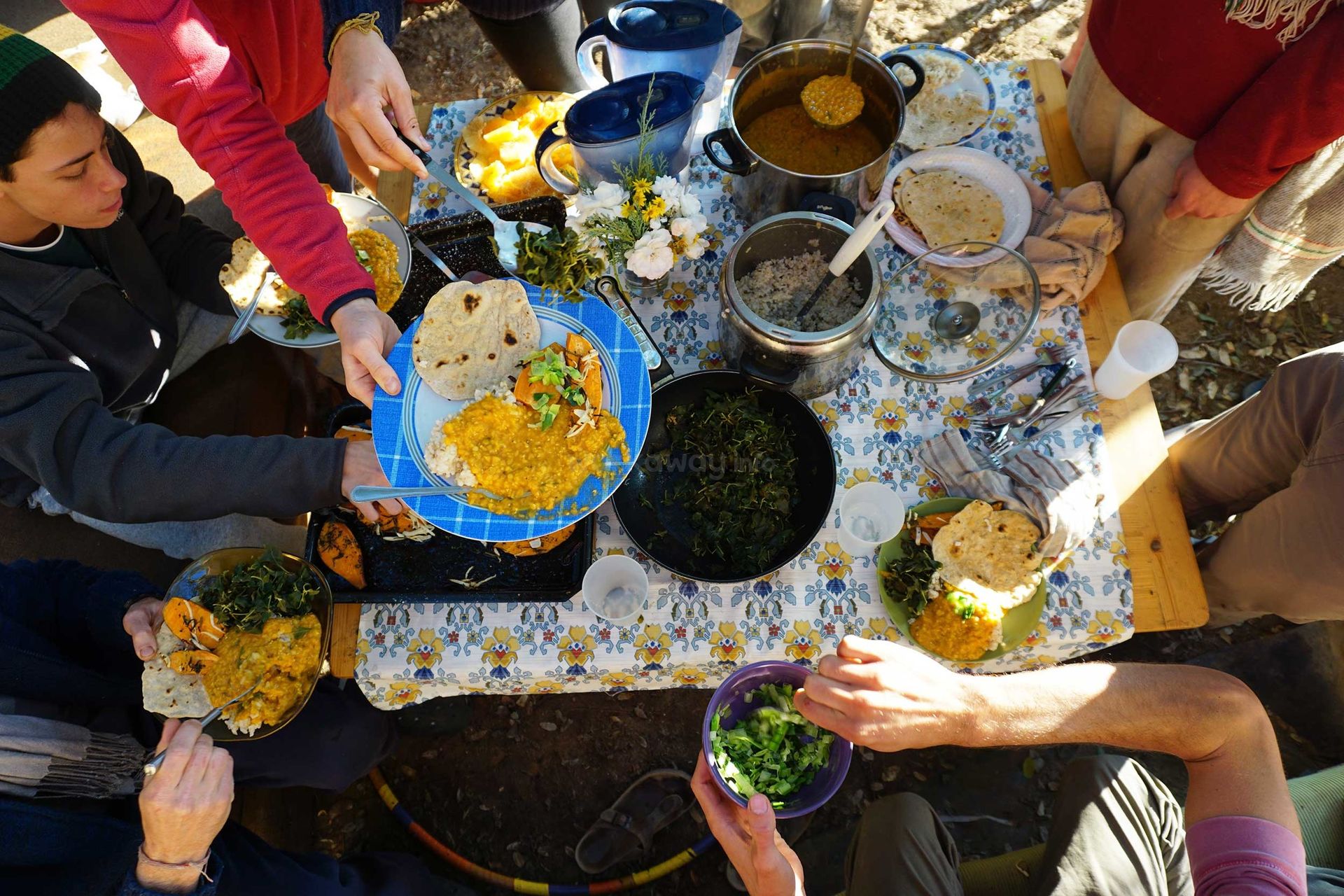 So here’s a basic recipe, learnt from those workaway days – quick and super easy to make and store for up to a week in the fridge. How you serve it, though; either as a quick dip or the base of a delicious meal in its own right, is for you to decide.

How to make hummus, the Israeli Way:

Place the chickpeas, tahini, cumin, garlic, a good pinch of sea salt and a good squeeze of lemon juice into a food processor. Blitz well until smooth, loosening with the chickpea liquid until it’s as creamy or as chunky as you like. Season to taste with cumin, lemon juice or salt. Spread the hummus out on a large platter, using the back of a spoon to create ripples. Serve drizzled with extra virgin olive oil.
Last but definitely not least, enjoy!

Malou is a traveller and freelance food writer-editor who previously worked as the Deputy Editor for Jamie Oliver HQ. She focuses on sustainability, food waste, ethics and food history, hence her penc... show more...hant for exploring unique food cultures and recipes while travelling!

View all posts by Malou

Join Now
Categories
Travel PhotosWorkaway NewsTravel StoriesHost of the MonthWorkawayer of the MonthInspirationTravelling TipsUsing WorkawayWorkaway AmbassadorWorkaway Foodie
Latest Posts
10 Of The Cheapest Countries In Asia For Budget Travellers Practical tips on how to teach abroad as a volunteer Travel differently, discover more: Authentic farm stay experience in Catalonia 7 ways we can universally give back as travellers How to use your skills to travel the world for free: meet Leo, our Workawayer of the month

Join Now
Meet the couple who are travelling the world by bike with their dog
Do we let technology define the way we travel?
Workawayer Login
LOGIN WITH FACEBOOK LOGIN WITH GOOGLE