Let’s be real, one of the most enjoyable things about travelling (and life!) is all the new food you get to try. And what’s even better is to learn how to make traditional dishes from locals, so you can relive those amazing travel memories bite by bite once home. In our ‘Workaway Foodie’ blog series, food-loving Workawayers will share how they have learnt about foreign cultures and communities through their food. We recently met Polish Workawayers and foodie couple Anna and Marcin, who have joined forces with their dog Lima and left Poland 3 years ago on bicycles starting a trip that never really ended. After hearing about their adventures in Greece, we just had to share their tasty trip with everyone! Over to Anna & Marcin! 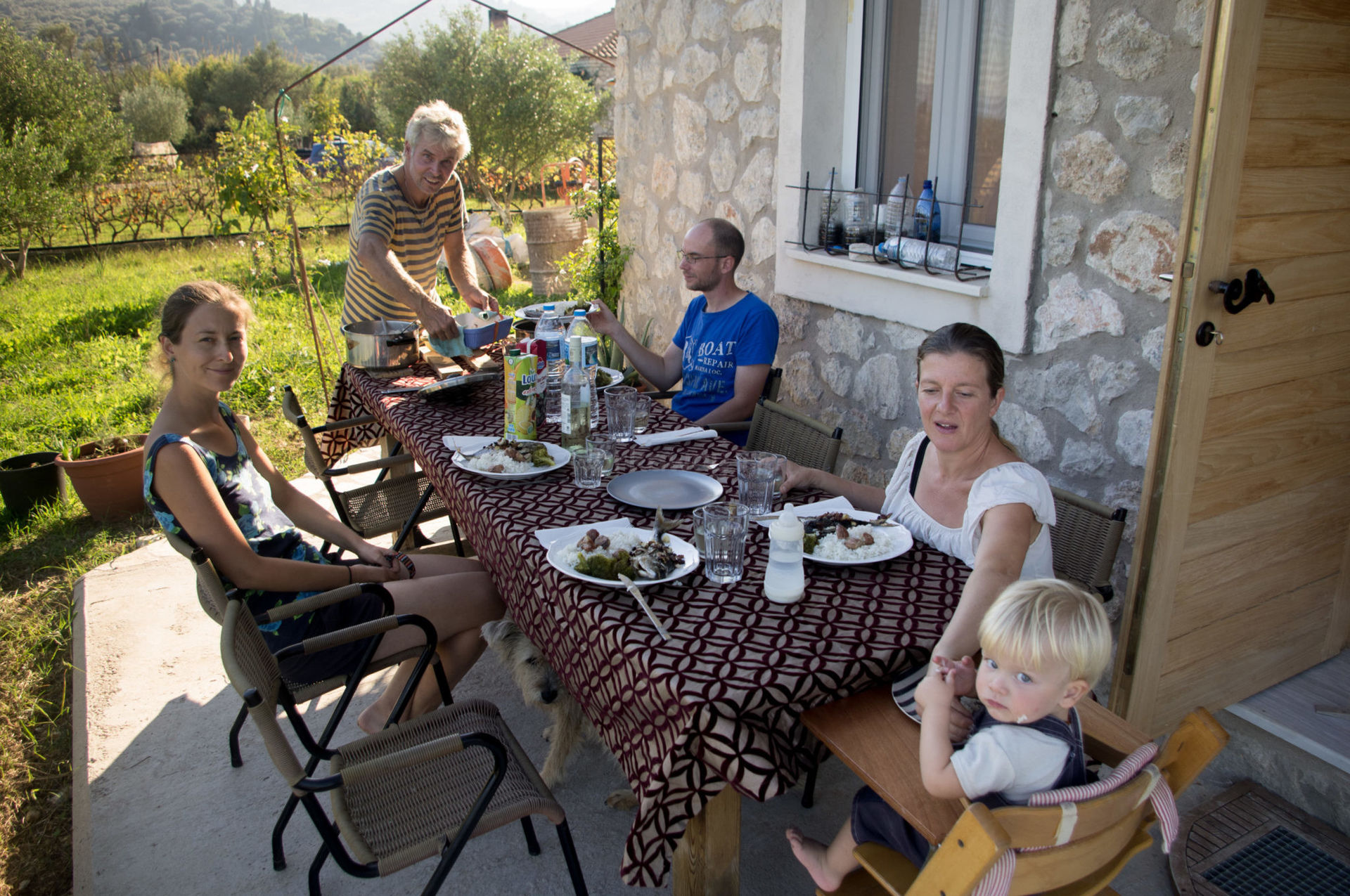 How many Greek dishes can you name? If you’re not a Greekofile, chances are, you will mostly likely start the list with moussaka, tzatziki, gyros, souvlaki or the Greek salad. But since our workaway trip in Greece, it didn’t take long for us to expand the list, and even to reinvent it!

We began our Greek adventure with picking olives on the island of Lefkada . Our Workaway host, Evangelia, welcomed us with a slightly bitter salad of boiled dandelion greens with olive oil, lemon juice and feta – a far stretch from your typical gyros on the streets. This marked our first introduction to the age-old Greek tradition of collecting wild edibles.

Watching Evangelia and her mum preparing our meals, I was amazed how all kinds of wild greens were picked around the house and mixed with spinach into a pie the size of a cart wheel! Horta was the name of the game. The word encompasses all kinds of edible “weeds”. Some of them you can find at your doorstep, while others can only be found high in the mountains.

All of a sudden, Greek cuisine became incredibly interesting – and nothing like what we thought it would be! Evangelia surprised us even more with her comments:

“I don’t like people saying moussaka is the most characteristic Greek dish. You can find it all over the Balkans! You have to go to Crete– the cuisine there is so unique.”

The more we learnt, the more we wanted to know! While we originally had no intention of going to what we imagined to be an overcrowded holiday disastrous destination, we found ourselves on a night ferry heading south to Iraklio, the capital of Crete, after two months of our Greek adventures. 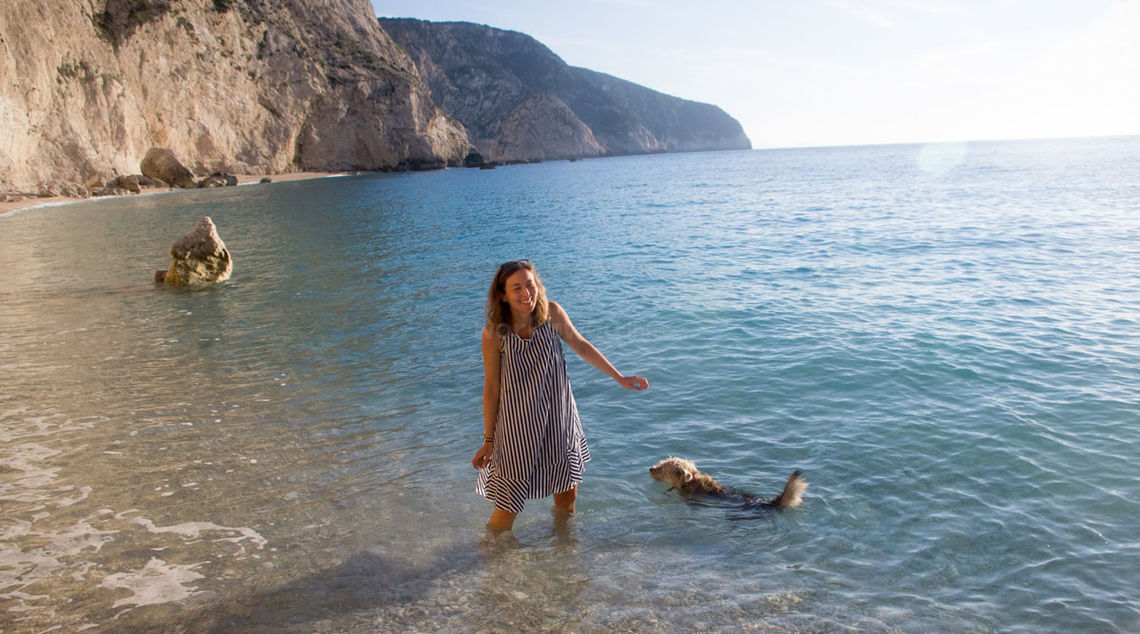 Upon arrival we immediately knew we’ve come to the right place. Our hosts welcomed us with the simplest of things put together in the most delicious way. Heavenly beets with oil and vinegar, fava (a split pea spread), tzatziki, shriveled salty olives, gorgeous orange cake, and a lot more.

We are used to more complex cuisines, and we were just so stunned by what appeared on our table everyday during our stay: things we normally considered sides were the mains here, and they are so, so delicious! Chickpeas cooked with onions and lemon juice? It’s food to die for! Brown lentils with greens? Soooo good! Green peas with carrots and dill? Nommm. Fava beans with artichokes, grape leaves and potatoes? Fascinating! White beans with tomato sauce? Could we have some more please!?
We were bewildered– how come it all tastes so good? Not only the cheese-and-beshamel casseroles, but also these simple, naturally vegan stews with almost no herbs or spices!

Our workaway hosts and their friends grew most of what we’ve been eating, so the ingredients surely played a part in the successes. But when we started watching the Cretans cook, the main culprit became obvious. It was the green gold… and lots of it, too! Our family had a giant tank of olive oil outside the house. A tank full of wonderfully fragrant, unfiltered, fresh olive oil. We knew that Cretans consume the most of it in the world, but how much exactly, we were about to find out for ourselves. Smaller barrels were kept closer at hand for regular refills; regular means every three days or so we would go down to fill the one litre bottle again. Ten litres of oil per month makes it 120 litres per year! 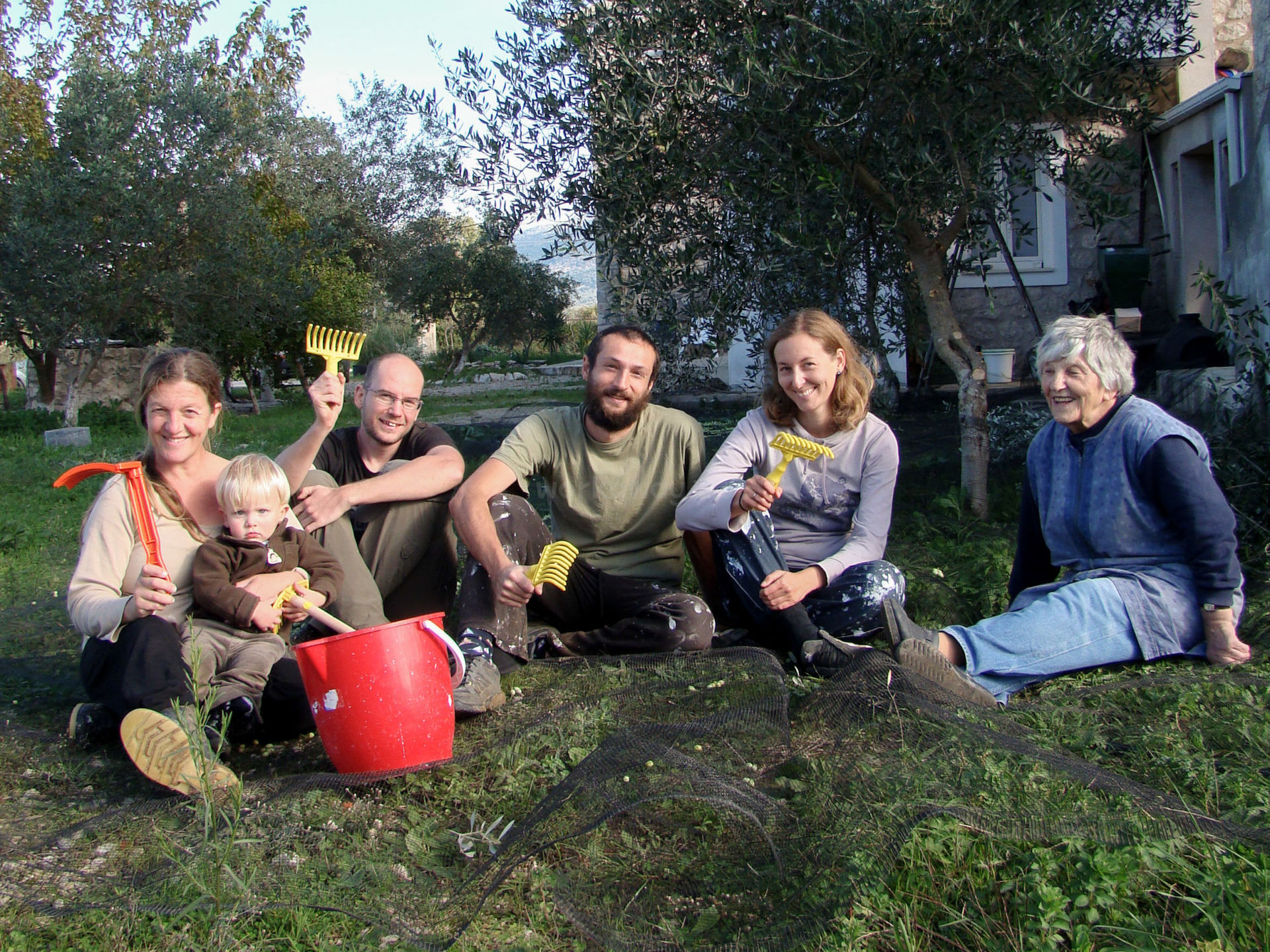 We would watch with amazement how the oil would flow in the kitchen. It filled huge casserole dishes or flowed freely into big bowls of salad while the cook was engaged in a conversation, and would only turn the bottle up when she was over with her train of thought. We couldn’t help but laugh when we imagined Cretans finding out about the invention of a kitchen brush used for spreading the oil thinly on the frying pan. How absurd!

Five months on Crete changed us forever. We left without eating a single moussaka and became the ones being watched while we pour olive oil all over our potatoes and salads and use it as sauce in cooking. All the lentil dishes became staples we make wherever we are, including the delicious white beans which we cook regularly. We watched how they were prepared several times and then started making them for the Cretans, without ever reading any recipe. We wrote it down for you because it’s definitely became one of our favourites and specialities! Remember though, the green gold (!) and the ingredients themselves are vital to how good the dish tastes. 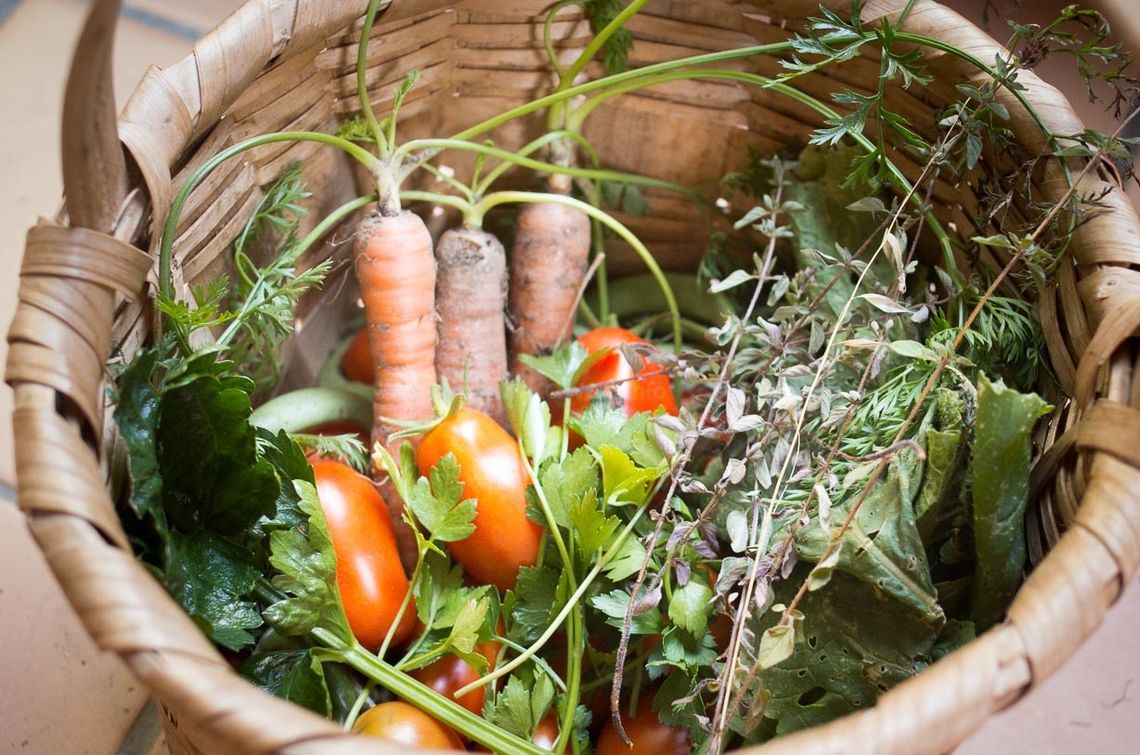 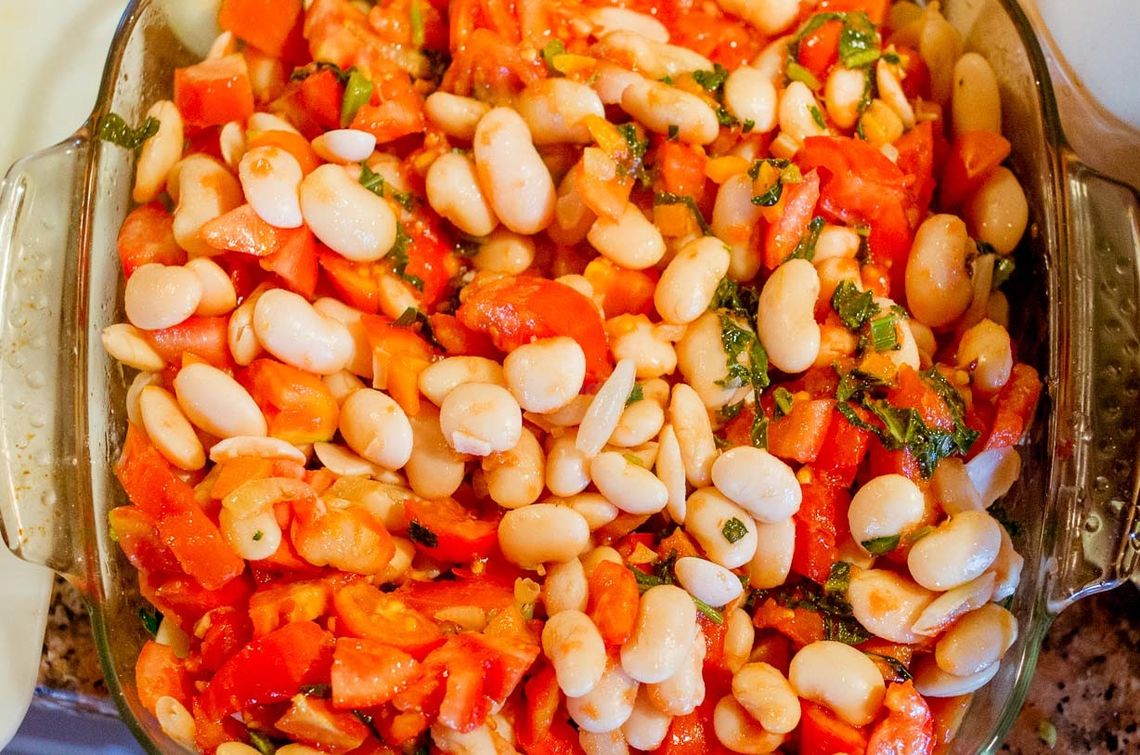 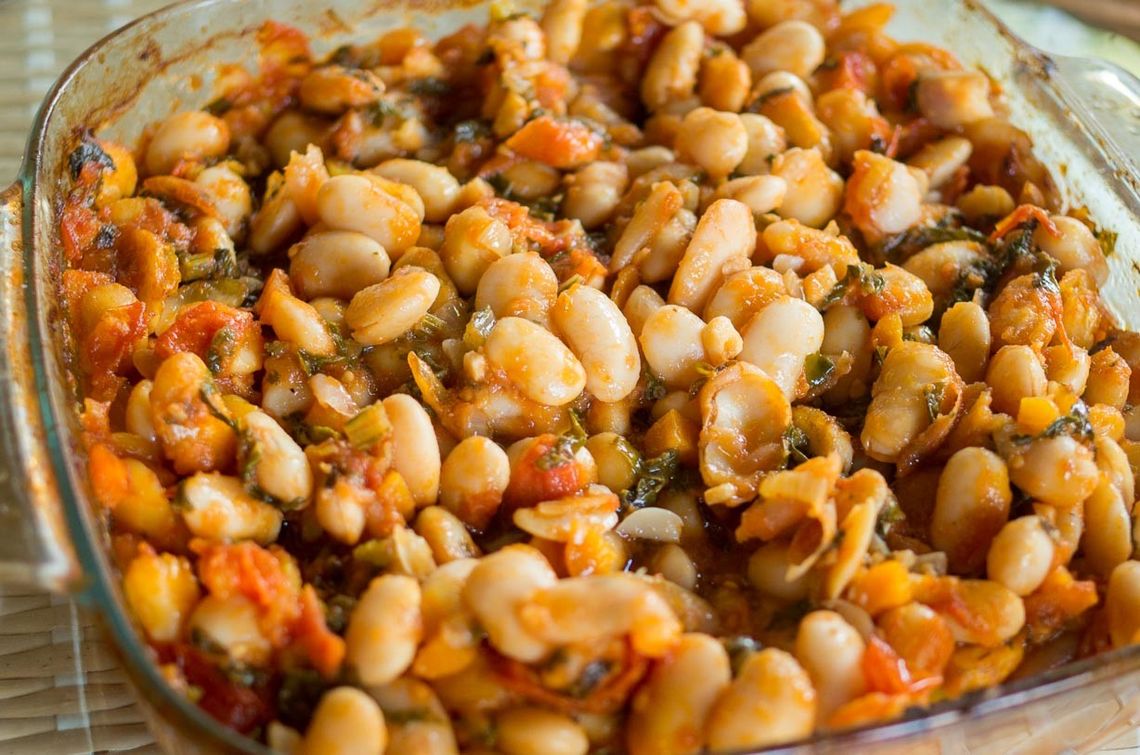 Big thanks again to Anna and Marcin (aka Two Hungry People) for the super delicious and healthy Mediterranean recipe straight from Greece!
According to them, travelling real slow while immersing in local culture with workaway are the best chances they can get to know the local cuisines. They are also passionate about embracing differences among humans and designing a fulfilling life that fits individual needs. Sounds like our kind of Workawayes! 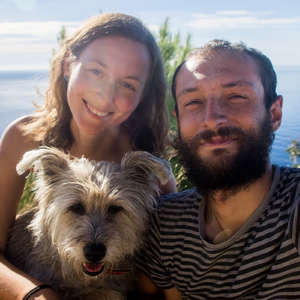 Join Now
Categories
Travel PhotosWorkaway NewsTravel StoriesHost of the MonthWorkawayer of the MonthInspirationTravelling TipsUsing WorkawayWorkaway AmbassadorWorkaway Foodie
Latest Posts
10 Hacks to get the most from your first Workaway adventure How to travel cheap while on the road This side of Thailand: Bubble house paradise where dreams come true Why taking a gap year is the best investment you’ll make in your life 6 Cheapest Countries In South America for your Next Gap Year

How to travel and Workaway around the world as a vegan
Brighten Your Day With This Colourful Cold Beet Soup Recipe From Lithuania
Delicious and simple recipes for travellers around the world
How to make the most of your trip while travelling with dietary restrictions
How to make simple & traditional Slovenian minestrone soup
Let your tastebuds travel: How to make Hummus – the authentic way

Join Now
Travel photography – “Ella Bridge” (Ella, Sri Lanka)
“Catching a sunset on a slackline after a day of helping at the hostel.” (Lima, Peru)
Workawayer Login
LOGIN WITH FACEBOOK LOGIN WITH GOOGLE