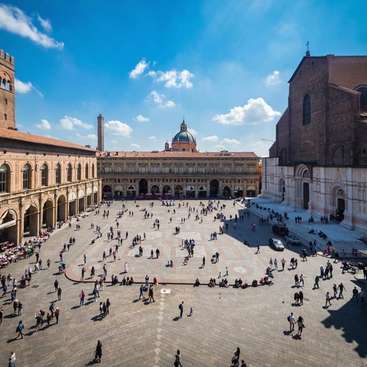 12/07/2020
Left by host for Workawayer (Holly)
Holly is smart, hard working, thoughtful, caring and has very good attention to detail. I would highly recommend her to all other hosts and I think she will make an excellent addition to your family. Thank you again for all your help and I wish you the best of luck in your journey!
(Excellent )
09/07/2020
Left by Workawayer (Holly) for host
Paolo is an excellent host: he is very welcoming, kind, accomodating, genuine and easy to communicate with. I stayed with him for five days and had a great time as a Workawayer at his house.
The work is easy and enjoyable - my tasks included cleaning the floors, tidying the kitchen, organising cupboards, and ironing. In the evenings Paolo showed… read more me around Bologna - he is a great guide and really enthusiastic about this beauitful city - and helped me to improve my Italian, which I'm so grateful for.
The apartment itself is very comfortable, cosy and close to the city centre.
Grazie mille ancora Paolo, spero di vederti in futuro!


You can only contact Workawayers who have an active membership.
(Excellent )
01/08/2019
Left by Workawayer (Vaida) for host
The experience of living together was great. In the mornings I was working and doing things like cleaning floor and windows, ironing clothes, washing dishes, nothing wery hard. In the evening I had time to explore the city and when I came back from the town I cooked dinner and we ate together and talked. He is very kind and caring person, he… read more always was asking where I was, what I did in a day or what I saw. Also he cared that I would be safe in a town or while I have worked. He also showed famous parts of a city center and tought me how to cook pasta:)
Very friendy and talkative person :)

Come and be a part of our family and help us with child care in Zürich-Oerlikon, Switzerland

Help us improve our English and French and give us a hand with the house in Alcoy, Spain

Be a big brother or sister to our kids helping with after-school activities in Brenna, Italy
(9)

Help with babysitting in Cogne (italian Alps) and Genoa, Italy