Italian family in York: join us for a cultural exchange, UK 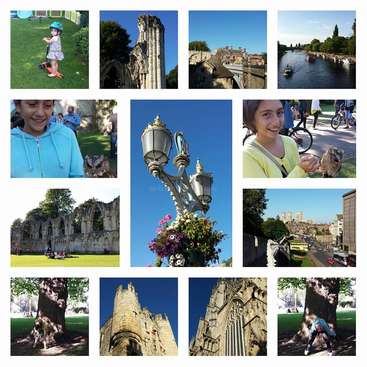 Silvana, Marco, Camilla, Matilde and Cecilia are all nice and welcoming, they have interesting personalities, the food is great (:D) and they really cared for me to feel at home with them. Still, I had some time to dedicate to my personal projects, finding a small part time job, joining a course, running and going out. They… read more are as flexible as they can in case you need specific arrangements, and they are always open to communicate.

Cecilia is a happy and energic child, she will just drag you into so many activities one after the other! I was bringing her to school in the morning, taking her back home and spending some time with her afterwards. I also did some chores in the house. The girls are nice and the atmosphere is always cheerful when they are around (you need either to appreciate music or be willing to sing/dance along!).
Mirò and Mirtilla are two lovely cats and are always around, so even in case everybody's out you'll never feel alone.

I was enjoying my time there and felt like part of the family. The location is perfect, in a quiet area close to the city centre (which I easily reached on foot), and York is full of things to do and see.


(Excellent )
18/06/2019
Left by host for Workawayer (Camille)
It has been a pleasure to have Camille joining our family.
She has been able to connect with all of us in different ways and she established a very good relationship with everyone.
She is quite shy, especially at the beginning, but then she finds the way to communicate and to enjoy time with everyone.
She has been really helpful with all the… read more girls, even if their needs were really different (they are 15, 12 and 4) and we also had delicious French and German food! :)
She was always ready to help, even if outside from the agreed hours, and we really felt her as a part of the family.
Grazie Camille! :)

(Excellent )
17/06/2019
Left by Workawayer (Camille) for host
Ciao,
I spent 4 months in this lovely family. Where I can start... Silvana is very nice and she speaks a lot, the three girls are very funny and Marco is very nice. And also Mirò is the most adorable cat I know. :wink:
The family speak in italian but they speak a very fluent english. Don't panick if you don't speak italian (you will learn some!).… read more If you are a low english, they will help you and you can go to the University to improve your english (there are some free english class).
During my 4 months, I ate some delicious meals. They cook very well. You won't lost some weight :wink:
For the work, it was nothing and very easy! You will have a lot of free time !
Moreover, York is a very beautiful place to stay and a lot aupair live here. The familiy lives very close to the town (i didn't use the bus) and it's very appreciable ! You can't get bore in this place !
I think I wrote enough ...
Thank you for the last 4 months!!! See you soon ! :kissing_heart:

You can only contact Workawayers who have an active membership.
(Excellent )
To leave feedback make sure you login & your account is online.
Host ref number: 416983966842
To contact a host, please login with your username and password or register with workaway.info.
My host list0
Give the gift of Workaway
read more

Veggie garden and indoor help with our friendly family in Co. Limerick, Ireland
(6)

Experience life in the real tropical jungle in Toledo, Belize
(11)

Unschooling family looking for an extra pair of hands near Paris, France
(4)

Information for those planning to visit the UK
Thinking of visiting the UK? Remember if you are not a UK or EU citizen and are planning to visit to work, volunteer or study, YOU WILL NEED THE CORRECT VISA. To find out more information you need to contact the embassy in your home country BEFORE travelling. Please note: Entry requirements for EU nationals are subject to change at the end of the UK Brexit transition period on January 1st 2021