Help us with babysitting in Galicia, Spain 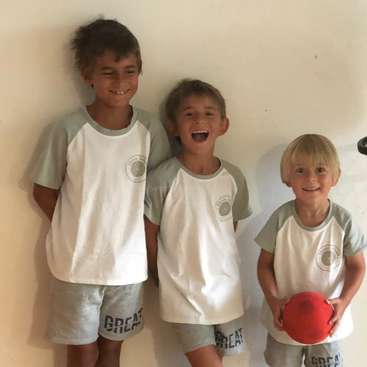 Feedback left by and about host (7)

25/09/2019
Left by Workawayer (Abbie & Michael ) for host
An experience of a lifetime. We spent one of the best summers of our life with Maria and Dalma in their lovely house in the beautiful Baiona. We were so nervous walking through airport arrivals but the moment we met María and her lovely boys we felt welcomed into Spain and welcomed into their family. María and Dalma are brilliant hosts and are… read more keen to immerse all Workaways into their culture and their home town of Baiona. We couldn’t have asked for more! We spent our time mainly exploring Galicia when María could lend the car, or spending time with Pablo, Nico and Martin. Although only 9 years old, Pablo is one of the most loving, caring and intelligent boys and was very helpful for us, translating for us and helping around the house. Him and Mike bonded especially over their passion and love for football! We even managed to take Pablo to a Celta Vigo game which was brilliant. Nico is a cheeky and loving 8 year old who has such a passion for sport, especially tennis and football! We enjoyed playing games with Nico and I loved him teaching me how to play Doble and playing jigsaw puzzles with him. And we could not forget little Martin. The most hilarious 4 year old full of character and life! We could not believe how independent and talented he is at everything! And we managed to teach Martin some English phrases too, his favourite being ‘cheese on wheels’! We miss all 3 boys so much as they made us feel so at home, especially at meal times. Last but not least was Ches! Mike made new best friend in Ches who is the most loving little dog who was so calm and friendly towards us. We spent our days walking Ches, swimming in pool, eating at the local restaurant Camu Camu or playing sports with the boys. This can hardly be classed as work, rather a life changing experience and a chance to make such lovely memories with an amazing family! We miss you all so much and hope to return to beautiful Baiona one day soon xx Abbie and Mike xx
You can only contact Workawayers who have an active membership.
(Excellent )
21/08/2019
Left by Workawayer (Kyle) for host
I spent a little over a month with Dalma, Maria, Pabs, Nico, Martin, and Ches this summer. This is a high energy house. The boys are always playing, always making noise, always full of energy. For me, this was great, as I enjoy environments like this. It was my first workaway experience, and first experience in a non english speaking country, and… read more its got me wanting more.

Martin, as a 4 year old, will test limits, but if you set and stick to some boundaries, he will reward you with his smiles and just overall joy.

Nico is a phenominal athlete. Future workawayers, make a point of going to watch some of his futbal games. It is really a treat to watch how hard he works out there in his element.

Pablo was always willing and wanting to communicate with me. I found him to have a great ability, at 9, to read and empathize with others. I worried at first about how challenging it would be that I know only very basic spanish. With Pablo around, I had nothing to worry about. He always seemed to sense if I was "lost", and kept me informed before I even asked, which was awesome. Dudes got some sweet dance moves, too. Play any song and watch him go crazy with it.

I cannot leave out Ches, about the sweetest dog ive ever met, who was staying with us most of the time I was there. Like, just follow you around quietly and fall asleep next to you when you sit down.

Maria and Dalma were very welcoming. What can I say, they opened their home to me. One weekend, some of my family came to visit me in spain, and they went way above what is expected for workaway hosts, by hosting them and treating them, twice, to an amazing local Galician dinner.

The culture of Sabaris was very refreshing. Rarely in America have i seen a community where people are so outgoing to complete strangers. It seems there are no introverts at Camu Camu. I will really miss many of the people i met here.

Gracias para un gran verano. I hope to see you all again someday.


(Excellent )
21/04/2018
Left by Workawayer (Giuseppe) for host
Nadine and I spent 2 months with Maria and Dalma.
They made us feel as if we were family since the very first day.
Nico, Martin and Pablo and 3 lovely kids, smart and so alive: they love to play, interact and they give you back all the affection you give them with interests.
Maria and Dalma have been so attentive to help us integrate in Baiona… read more and in in this area where we planned to settle down, by introducing us their friends, lending us their cars sometimes and many other thoughtful favours.
Most of all by being so kind and lovely with us, we became true friends and the 5 of them have grown like our Galician family.
The room the gave us was spacious and bright.
We mainly spent time with the kids at the beach, at the swimming pool and at home.
The area around if you love nature and small towns is as wonderful as you could ever imagine.
We are happy and honoured to have met this family and for the 2 months shared time and life experiences together.
Mil gracias Maria and Dalma!
Mucho cariño para Patato-man, Nico and Pablín :)
You are always in our hearts

You can only contact Workawayers who have an active membership.
(Excellent )
21/09/2016
Left by Workawayer (Anastasia) for host
I stayed with Maria, Dalma and there children for almost 1 month and I would like to say that they are greate family! It was really good expirience to stay with them. Maria and Dalma are easy going and very positive and kind, I felt myself in there home like in my one. The boys: Pablo, Nico and Martin are so cute and funny, there was not any… read more problem to make friends with them. We spent time playing football and swimming in the swimming pool or plaing some card games) And I had enough free time as well. Usially I went to the beach o bicycling. I also always could join the family for walking and Maria showed me some beautiful places. And of course I had a good practice of my Spanish :)
Thank you so much for all! Say hello to chicos!

You can only contact Workawayers who have an active membership.
(Excellent )
22/08/2016
Left by host for Workawayer (Sto)
If ever you want to have Mary Poppins at home....just let Sto go in :).
He became a big brother for Pablo, Nico and Martin (with 1 year old he still says Sto, Sto whenever he sees a blond guy in the street)
Sto played with them, took care of them, listened to them and took care of them as the big brother he became
And the same with Dalma and… read more me, he always asked Can I help you?
So...Sto...thank you for coming and make us laugh, play, sing, dance...whenever you want to come back this is your home, people of the world...if you want to be happy...just let Sto in :))

(Excellent )
27/07/2016
Left by Workawayer (Sto) for host
Wow, where do I even begin. I stayed with Maria, Dalma and their 3 boys (Pablo, Nico, and Martín) for 2 months in Baiona for quite possibly the best summer of my life. This family is as good as it gets: welcoming, friendly, generous, kind, loving, and a list of million other adjectives. I became extremely close with this family and it was painful… read more to leave them. The boys are really good boys. Definitely on the energetic side so if you demand peace and quiet, this isn't the family for you. But the energy this family brings every day is what makes them so unique and special. We loved to play futbol at the courts nearby, go to the pool, listen to music, play Wii, learn English, and even take the occasional day trip to a place nearby (Santiago de Compostela, Cangas beach). The bottom line is if you show these boys your love and attention, they will give it right back, and more. Personally, I sat down with the boys as much as I could to teach them English and talk about my life in the US, but we mostly spoke in Spanish.

Maria and Dalma are two of the most extraordinary people I've had the pleasure of meeting. They were as genuinely interested in learning as much from me as I could learn from them, which lent itself to great conversation. They also provide a solid base at home and the boys worship them, especially Martín (hes a Mommy clinger!). Furthermore, their intentions for inviting strangers into their home are pure as gold: to show their young boys that there is a whole world of people beyond the town of Baiona. And speaking of Baiona - it is a fantastic town located on the coast with plenty of beaches and beautiful weather.

In summary, consider yourself extremely lucky if you ever are invited to stay with Maria, Dalma and their boys. I know I do. I will never forget the memories me and this family shared this summer and they left a lasting impression on me. I am forever grateful for their kindness and hospitality.

To Maria and Dalma - send your boys to US one day. As I said, you all are always welcome!! Much love from your very own Mary Poppins.

You can only contact Workawayers who have an active membership.
(Excellent )
19/08/2015
Left by Workawayer (Mariah) for host
I couldn't have asked for, or even imagined a better family to spend my first workaway experience with. I felt welcomed from the first moment I met these beautiful people and although I was only with them for 2 weeks I was so sad to leave and will definitely be seeing them again (if not in Spain... in Australia). Maria and Dalma are quite possibly… read more the nicest and most generous peopleI've met! I really felt at home with them and their beautiful boys!!
I had good fun with the kids and think I improved on my football skills quite a lot (they may think otherwise haha). There is never a dull moment with the 3 boy and I look forward to seeing them in Australia when they're older!!
Baiona is a cute little town by the water with a nice relaxed vibe and it has ferries going to Cies Island which is an absolute must!!
I honestly can't speak highly enough of Maria and Dalma, they are truly beautiful, kind hearted people and I look forward to seeing them again one day!!

Thanks for everything guys!!
Xx love Mariah

Have a real Aussie experience living with our family in the Bega Valley, NSW, Australia

Come and join our sustainable eco village in Pendaya, Cyprus
(2)

Need some extra hands around our orchard, meadow and in the gardens in Winterswijk Woold, Holland
(15)

Learn to live in harmony with nature, helping on my farm in the province of Chubut, Patagonia
(4)