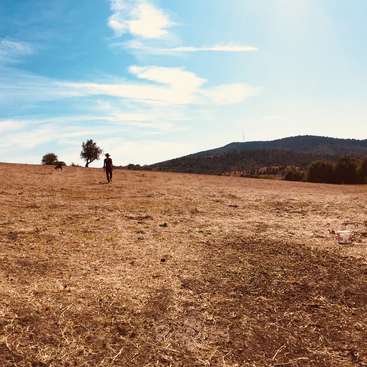 Like & share
Join now to contact this host
This listing is a Last minute host. They have let us know that they are looking for help immediately as well as at other times of the year.
MapAvailability
2020

22/01/2020
Left by Workawayer (Jessica) for host
Perhaps we could have parted on better terms but I am so grateful for the time that I spent here - red roads, a dog in heat, spilt milk on my notepad - I look back to these few weeks to make decisions now. Thank you for taking a chance.
(Excellent )
21/01/2020
Left by host for Workawayer (Miriam & Valentin)
How does one leave feedback to someone who has become a great friend? To someone you only have gratitude and love towards.

Words do not suffice.

Dear Miriam and Val, we are so very happy to have met you. In a way, or rather in many ways you transformed this place with the joy and beauty that you brought. And I suspect it will continue to echoe-… read more even long after you have gone.

For any stranger reading this- Miriam and Val are extraordinary human beings. You do not want to miss the opportunity and joy to meet them and host them.

Be well, dear friends!
until we meet again (on the baseball field).

(Excellent )
11/01/2020
Left by Workawayer (Miriam & Valentin) for host
These guys are amazing!
First of all, it will be hard to write a review without sounding cheesy, so prepare yourself.
We want this review to show any reader our experience, and for you, to smile and laugh about it by thinking back.
It was something around 3 weeks that we spend in this beautiful place, surrounded by stunning nature, a few cute… read more farmer neighbours and lots of love ;-) so how to begin...spending time there is obviously connected to some kind of work, but it did not ever feel like "work" if you know what we mean. there're many possibilities to be creative and put in your preferences. you'll face a variety of "what to do's" and most important, there is a lot of inspiration and team work going with all that. we never at any point felt like being forced in a way, as we could bring in our ideas. you know, it's a circle of giving and getting back in return.
we loved the fact that we could see the small impacts we brought to daily and also log term tasks and that it was covered with free time. you either spend it in lovely company or by yourself. we learned a lot, and it is not important to be wide experienced or anything, you learn the best by trying and experimenting on things. the food, not to forget, is worth to mention it here. we were able to taste a rich variety of food everyday, making us feel the most healthy and good as we are backpackers. thanks for that! kimchi will be made as soon as we are home. it's a shame that there have been some ill days, but we could not be more welcomed anywhere else to get cured and taken care of.
You gave us so much love and knowledge and we hope to give the same back and now we can say we got new friends with you. it was hard to leave (oh this sentence is used so often), but seriously, we felt like home. we miss you and are thankful for all that you gave to us, especially all the laughter, if you were to rate on an Ali-boum scale, you would be a full 100% Ali-boum experience. We love you!

So, we totally recommend staying with this family and exploring something that you can only find in this special place. The farm itself is beautiful and needs people to keep it alive. It has a long history and probably Zorro would be the one to tell you all about it since he has been there from the beginning, but as he's a cat, you can spend some time cuddling with him and imagining the story of all the years by yourself. Small side comment, we miss you Zorro!
Now to finish this, we hope you read it with your theatrical voice and got some good sweet popcorn afterwards. <3

Join our family for a language exchange and help with child care in Cadiz, Spain

Experience Finnish country side, while visiting all the biggest cities easily, including some nights in Helsinki, Finland
(25)