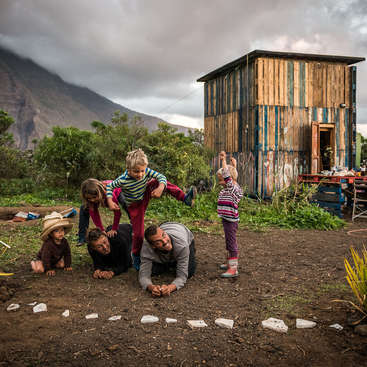 17.03.2021
Vom Host für Workawayer (Julita)
Julita (pronounced Yulita 😉) was a very attentive and reliable helper. She is calm but at the same time very sociable. She has good basic construction skills for repairing and improving wooden constructions, irrigation system, oiling, sanding and painting. She spreads very good mood if she has sun. She is like a plant. Hahaha. She also took very… read more good care for the household and kitchen.

We would love to welcome her again any time. As a helper or as a guest.

(Ausgezeichnet )
25.02.2021
Vom Workawayer (Julita) für Host
If you are searching love and friendship, this is right place for you. I couldn't believe that thousands of miles from my house i can find people who became my family. I was very happy to be with them and i will always have them in my heart.

Talking about work - for me it was good, because usually everyday i was doing different jobs and never got… read more bored. I liked to watch relationships between chickens or ducks. I liked to look in the garden, to pay antention how everything is growing, smell a flowers and eat strawberry in the middle of winter. Usually we finished work at 13/14 h so we always had a lot of free time.

Life conditions is unique. You need to be ready for cold shower at winter, for cold nights and sometimes rain (yes yes, they said that usually there is no rain, i was lucky to got it), but everything means nothing, because you are living surrounded by nature. You open your little house door and can hear singing birds, you can see all flowers in the field. And this is wonderful!

I really recomend this place ;)

And thank you Eric and Maraique for my best adventure ❤️

(Ausgezeichnet )
17.03.2021
Vom Host für Workawayer (Jonny)
We experienced Jonny as a very attentive and reliable person. He is calm but at the same time very sociable. His works are very precise and creative (recycled a lot of old wood and other pieces). He was able to work under difficult conditions (used our power tools adapting to the many power outages due to our broken solar system). He is a… read more professional trained carpenter. We thank him for taking the role of mediator in a problematic social situation.

We would like to host him again – anytime, as a guest or as a helper.

(Ausgezeichnet )
04.03.2021
Vom Workawayer (Natalia) für Host
Incredible experience, such a lovely and warm family! The nature around the houses is breathtaking, spending time with Erik, Mareike, kids and other volonteers is just a pleasure. You can learn a lot from them. Thanks to Erik I was able to visit the most beautiful hikking trails on the whole island. This is the best place for nature lovers. Thank… read more you so much for having me!
(Ausgezeichnet )
01.02.2021
Vom Workawayer (Gesa) für Host
I am incredibly grateful for the time i was able to spend on the island. I can recommend it to everyone!
Mareikes and Eriks family welcomed me warmly in the family. I stayed there for three months (October-December). I am really happy that I have been there and I would come back anytime. I thank all the lovely people I was able to get to know,… read more especially the four children.
I wish you the best, Gesa

(Ausgezeichnet )
26.01.2020
Vom Workawayer (Johan) für Host
What can I say. Staying at this place was coming home to me.
The space, the children, the people, very nice and friendly hosts.
I just loved it.
Thank you Mareike and Erik <3
love, Hannah

Du kannst nur Workawayer mit aktiver Mitgliedschaft kontaktieren.
(Ausgezeichnet )
12.01.2020
Vom Workawayer (William) für Host
It was my first workaway experience and I really liked it! I spent almost a month (December-January) on the beautiful island with the family and I had the chance to live in a “natural” way, feeding chickens, watering and pruning plants...and playing with Juanito! I could also use their bike to visit El Hierro, and on my last day I even tried the… read more amazing experience of paragliding.

Many thanks again,
William

Du kannst nur Workawayer mit aktiver Mitgliedschaft kontaktieren.
(Ausgezeichnet )
02.10.2019
Vom Workawayer (Duc) für Host
Volunteering at Erik's and Mareike's place was my first time via workaway and it was pretty nice. The work involved some gardening, chores like cooking and groceries and taking a little bit care of the children. Who are very independent and smart for their young age. Also hanging out with Erik and a other volunteer was quite fun (Mareike wasn't… read more there at the time).
So all in all working there and also learning from their project , while enjoying pretty much freedom, was definitely a good experience.
I wish you all the bedt with your project and kenn to see how it evolve in the next few years ;)

Du kannst nur Workawayer mit aktiver Mitgliedschaft kontaktieren.
(Ausgezeichnet )
08.06.2019
Vom Workawayer (Martin) für Host
The family has always been nice to me and teached me a lot. I personally think you can learn a lot from their lifestyle and farm life. I am really happy that I have been there and lived with them for a while.
Du kannst nur Workawayer mit aktiver Mitgliedschaft kontaktieren.
(Ausgezeichnet )
03.06.2019
Vom Host für Workawayer (Baptiste)
We enjoyed a lot hosting Baptiste. He knows very well what he is doing, is a very nice character and brings good mood along. We would very much appreciate hosting Baptiste again for a longer stay. Thanks
(Ausgezeichnet )
12.04.2019
Vom Host für Workawayer (verena & Linus)
Verena was only with us for a relatively short time, but she helped us very reliably, diligently and conscientiously. She is a very honest and interested person, unfortunately I did not have so much time to talk to her.

It would be nice to see her again – when we’ve found a better place for our loud cock. ;-)

(Ausgezeichnet )
27.03.2019
Vom Workawayer (Hauke) für Host
I came to you without any special expectations of landscape and people, and I was very happy to enjoy one of my most beautiful holidays with you. I could help you with a lot of interesting projects together with interesting and nice people, and I learned a lot. I am very impressed how you manage a garden like yours on this soil and under this… read more climate conditions!
El Hierro is also the most beautiful and natural island of the Canary Islands, where you can find a lot of beautiful hiking tours.
It was a very beautiful, interesting, instructive and adventurous:)... month.

Many thanks to all the people with whom I was allowed to spend time there and also afterwards!
Hauke

Du kannst nur Workawayer mit aktiver Mitgliedschaft kontaktieren.
(Ausgezeichnet )
28.11.2018
Vom Host für Workawayer (Lilli)
It was great to host Lilli. She is very responsible, attentive and adapted easily to changing situations or work tasks.
She did not hesitate to propose her ideas or to ask about any work instructions when there was anything not clear or she had any doubts. It was interesting talking to her and having her around made a good atmosphere. I would… read more definitely host her again!

(Ausgezeichnet )
28.11.2018
Vom Host für Workawayer (Kathrin)
It was great to host Kathrin. She is very responsible, attentive and adapted easily to changing situations or work tasks.
She did not hesitate to propose her ideas or to ask about any work instructions when there was anything not clear or she had any doubts. It was interesting talking to her and having her around made a good atmosphere. I would… read more definitely host her again!

(Ausgezeichnet )
19.11.2018
Vom Workawayer (Kathrin) für Host
We just spend a month with the family on their beautiful property on El Hierro and we couldn't imagine a better first experience with workaway!
Because they were so friendly and spent a lot of time with us, we felt really welcome and at home.
Our tasks were helping around the house, gardening, painting doors, washing the dishes, cooking etc It was… read more great that the work was different every day and that we always got clear instructions. We are so happy that we learned many things about gardening, the history of the island and where the magical places for hiking are. They live quite simple but we could easily adapt and we miss being in nature all day long now!
You can walk to a few beautiful places (natural swimming pools, a museum about the ancient El Hierro, the town of La Frontera) in about one hour, but you need to take the bus, hitchhike or get a car to see other parts of the island.
There are a lot of cool trails, e.g through a fairy-tale forest or up to spectacular view points.
We would definitely stay with them again!
And we come back to El Hierro for sure to meet you again and go to all the places we haven't seen yet :)
Vielen lieben Dank, dass wir diesen wunderschönen Monat bei euch verbringen durften!