Here at Workaway we now have an amazing 50,000+ opportunities and volunteer exchange projects available in many different parts of the world. From agricultural help, scuba diving, yoga retreats and most things in between, we are so proud to be associated with so many amazing hosts. So, we’ve started a feature to help recognise what a difference cultural exchange can make to travellers and to hosts. Going by the name of ‘Workaway Host of the Month’ we will reveal more of what it is like to be a host and let you into their routines and how their projects have changed since opening their doors to you.

This month, we talk to Samira and Alan with this school project at an Ecuadorian Amazon village . Dedicated to helping protect indigenous culture in the heart of the Amazon, they need volunteers like you and me to help teach English in their remote village. We’re inspired by their project and know you will be too! 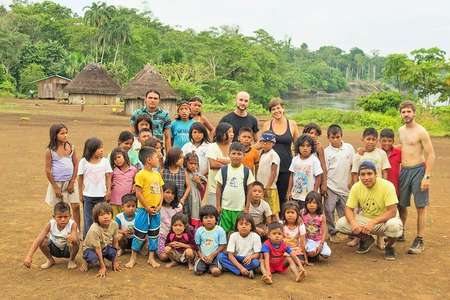 How did you first come into contact with the Achuar and learn about their culture?
Samira and Alan:
Alan originally visited Achuar territory as a volunteer with another project called I Am Achuar. While there, he met the residents of the Suwa community, who had a house ready for volunteer teachers. With their agreement, he and Samira started a crowdfunding project to establish the initiative, as well as an online presence for the purposes of volunteer recruitment.
What are some things that might surprise someone about Ecuador and the Achuar people?
Samira and Alan:
Ecuador has seen a lot of government investment in infrastructure, so incoming volunteers are often surprised by the modernity of its international airports, motorways, etc. Having said that, while the volunteers are inside Ecuador preparing to enter Achuar territory, we encourage them to be patient with the slow pace of life, and Latin America’s infamous “mañana” culture.We also encourage volunteers to be aware of the differences between themselves and the Achuar. This often manifests itself in unanticipated ways: in conversation, for example, or in some of the values which the Achuar hold dear. We believe however, that the stereotype of indigenous people in Ecuador of being ‘savage’, ‘backward’ or ‘undeveloped’ is wholly unjustified, and we work hard to instill pride, self-knowledge and self-confidence in our students. 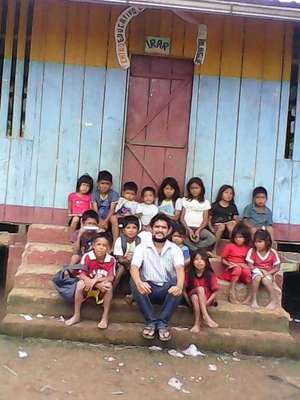 What might a Workawayer expect their first week in the jungle to be like?
Samira and Alan:
We try to prepare workawayers to expect some sort of cultural shock when they first arrive. They will need to take a few days to adapt to the climate and the pace of life. Getting far from technology, buzzing phones and social media, is undoubtedly refreshing and good for the soul. You will leave behind the pressures and sedentary life of the city for a therapeutic, largely outdoors existence: swimming in the river, hiking in the jungle, hunting or fishing, or drinking home brewed ‘chicha’ as someone’s guest.

However, it goes without saying that living in a remote place like Suwa also brings several physical and mental challenges: the humidity and heat, the persistent mosquitoes, the distance from technology and convenience. The residents here also have to adapt to new visitors from very different places. Therefore, we often suggest delaying entering the classroom for the first few days, until the volunteers have had time to meet all of the families in the community and reflected a little on the sort of teaching they should do. 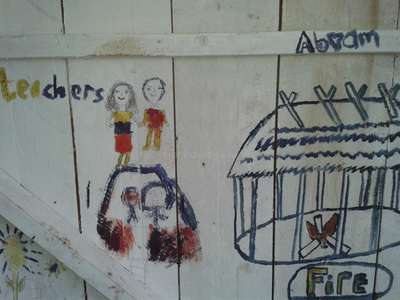 The location of the school and the village sound very remote.What are some challenges or advantages to living without some of the conveniences we might be used to?
Samira and Alan:
Indeed we are a small community deep inside the rainforest. There are no roads, no electricity and the only way to get in is to take a small plane (from a place called Shell), across a jaw-dropping green canopy of unending broccoli, and then board a motorized canoe to reach the community. It’s a breath-taking experience.
In our opinion, this is the most amazing place we have ever seen, an ever-changing canvas of bright, dark and earthy colours, an incomparable soundscape of animal sounds (we particularly enjoyed the toads’ choir who’d serenade us every night), and the most dramatic and unpredictable climate we’d ever encountered. In Suwa, nature is the boss, and we are her guests; she will not miss any opportunity to show – depending on the situation – either her power or her profound generosity. 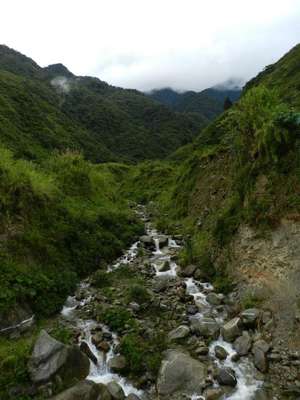 Eco-tourism is becoming a trend as a way to try to preserve cultures and natural resources that are being threatened by development and oil companies. Do you see your project as a possible solution?
Samira and Alan:
Indigenous people are undoubtedly the biggest losers in the process of resource extraction, and the struggle against it continues to this day. Out of the seven indigenous groups residing in the province of Pastaza, the Achuar are the only group who haven’t sold any of their land to resource extraction. Instead, they’re attempting community-run eco-tourism, setting up places like an eco-lodge Hotel, which offers something of an insight into Achuar culture.​​​​​​​

It’s not a perfect solution but it represents their best chance of retaining something of their culture and lands in the face of a rapidly encroaching outside world. If we are to salvage anything from the Amazon as it is now, its preservation must be a priority for us all. By supporting our project you are helping preserve the Achuar culture and preserve the environment.
How did you discover Workaway and what made us seem like a good fit for recruiting volunteers for this opportunity?
Samira and Alan:
Workaway is renowned among travelers, particularly those who are uncomfortable with the ‘tourist’ label, so it was common sense for us to register an account. What surprised us, however, was just how central Workaway was to our project. In fact, almost all our volunteers have contacted us via this page. Workaway has helped us connect with people from all around the world, with different skills and who share the same desire to experience something special. After two years, we now have a community of people (comprising of current volunteers, ex-volunteers and supporters). 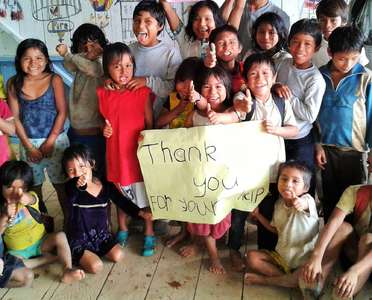 What’s some advice you can share for a Workaway volunteer interested in teaching English with your project?
Samira and Alan:
​​​​​​​Workawayers have to understand that their values are a product of their experience, background and environment, rather than an objective fact, and should expect the locals – both children and adults – to see many things differently. Some things might not go entirely as one might expect, and when that happens, it is better to try to understand why rather than to judge. Patience and humility are essential human traits for a volunteer with us.

Big thanks to Samira and Alan for sharing all the interesting insights of their jungle life as a workaway host in the indigenous Amazonian village.Do you want to be our next WA Host of the month? We are always on the lookout for hosts who have a great story to tell! Email us and you could be in our next feature!

Be part of the tropical island dream for a better world and greener future!
A new way of life: creating magic with a multicultural eco-community at the Yucatan cenote
Learn, heal and grow with this yogic community nestled in a forest valley of Australia
The Call of the Jungle: Wildlife rehabilitation in the unplugged Amazon
This permaculture classroom in Thailand is a sustainable paradise for all!
A haven for dogs, cats and nature lovers: Animal Refuge on the Algarve, Portugal