An epic couple of journeys form the subject of this article written by Chris Cage who used Workaway to provide some welcome and thoroughly deserved breaks from turning the pedals across New Zealand. 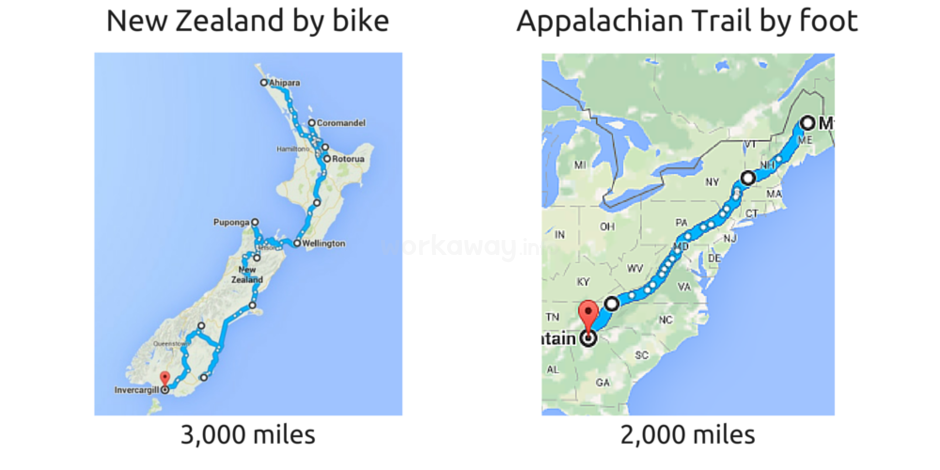 The routes of two epic journeys

Here’s a bit about Chris in his own words:

“I quit my accounting job back in 2012 to pursue a two year adventure. 10,000 miles backpacking through Asia doing everything from teaching English in Thailand to volunteering at an childcare centre in Cambodia. Then a 3,000 mile bicycle tour of New Zealand. And finally, 6 months hiking the 2,185 miles long Appalachian Trail… a dream of mine since I became an Eagle Scout.” 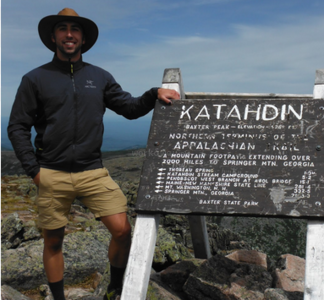 I Made a Promise – No Motorised Vehicles.

At 14 years old, my Boy Scout Troop took an overnight backpacking trip to the GA foothills of the Appalachian Trail. I can remember looking down the dirt trail, through a narrow corridor of pine trees, being fascinated that this tiny path continued on 2,000 more miles to Maine. I wanted to experience it.

January 2012, I was 23. Life was good with a stable accounting career.

The idea of waking up in 40 years still doing the same thing was a little terrifying. I didn’t want the life where “adventure” was a weeklong trip to Paris with a selfie at the Eiffel Tower.

A little savings in the bank, no big obligations and no real excuses. Now was the time. In addition to the Appalachian Trail, I started planning an epic bicycle tour of New Zealand. Researching everything from gear to routes to logistics. This would be an adventure of a lifetime. I would take no short cuts – travel only by foot or pedal and only hitchhike when desperate.

6 months later, I put in my final notice at work. Dad didn’t want to speak to me. Mom cried. 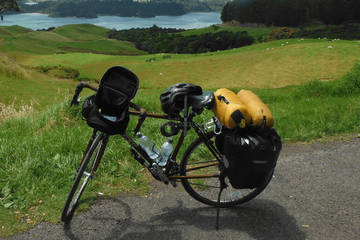 I had barely ridden a bike in nearly a decade. Now a used steel frame bicycle from Craigslist was about to become my home. Everything I needed to live was strapped to the back of it – one saddlebag on each side of my rear tire.

The first day was one of the best. Riding out of the city felt like I was busting out of prison, experiencing freedom for the first time. Every mile got less and less congested until I found myself surrounded by open pastures. The excitement of setting off on rural roads with no destination was, for me, unparalleled.

The sun was setting without a town or campground in sight. I decided to knock on a farmer’s door and ask to setup on his lawn. Without hesitation, he agreed and pointed to a nice grassy spot away from the cows. He then invited me in for dinner with his wife… and gave me a big ole glass of unpasteurized milk. Gotta love the Kiwis.

My legs were pathetic. I could hardly walk after one week on the road. Moaning on every uphill and sighing in desperate relief on every downhill. One month in though, I was a lean, calorie-burning machine.

I spent the next three months zig zagging down the country. Around glacial lakes, through sheep pastures and over snow capped mountains. When the sun started to set, I setup camp on the side of the road or knocked on a farmer’s door. Every few days, go through a town to shower and get a new supply of food and water. Sites like Couchsurfing and Warmshowers were great for finding hosts and fellow cycle tourists.

About every thousand miles, I would take a week or two off and do a work-exchange via Workaway. Basically working 4 hours a day with a local host in exchange for food and lodging. A wine vineyard, surf shop and beach hostel.

After just over 3 months, I had gone the equivalent distance from Canada to Mexico… and then back up to Canada. It was epic.

5 Months on the Appalachian Trail

A couple of months later, I was at the northern terminus of the Appalachian Trail – Mt. Katahdin, ME. At 5,000 feet above sea level, looking south at the horizon, I could barely make out the faint trees. They looked really far. Those trees were probably only a three day hike away. Even if I averaged 15 miles a day, GA lay 5 months beyond them. Intimidating to say the least.

1 in 10 people complete the Trail. As I sat on top of the mountain, I found out a man had turned around before making it to the top. My odds were already increasing. 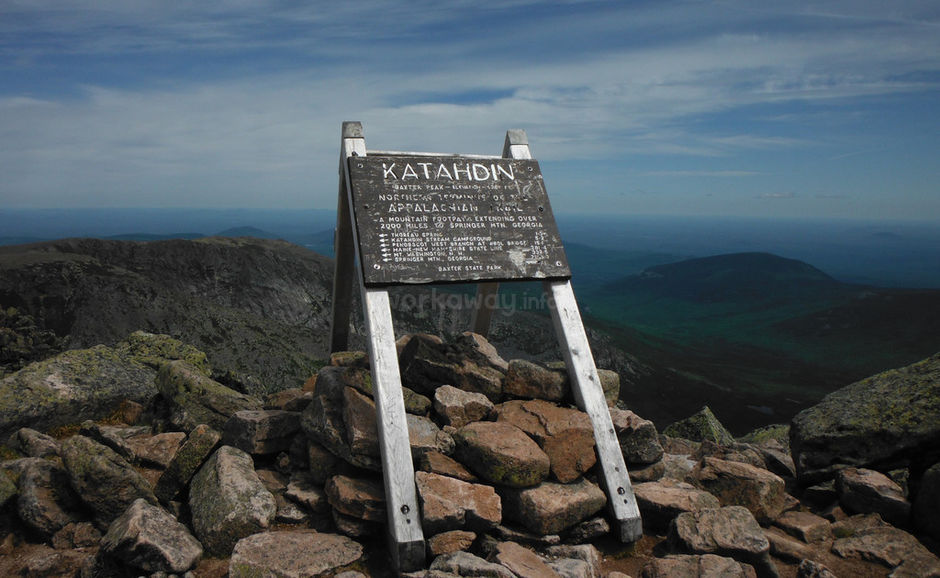 Once again, everything I needed to live in the woods was in a bag. This time though, instead of a bicycle, the bag was strapped on my back. Tent, sleeping bag, you name it. Every spare ounce was eliminated. Except for a jacket and an extra pair of socks, I was wearing all of my clothes. I had shaved off the handle of my toothbrush and cut every extra little bag strap and zipper. Bare essentials only.

Life was simple. Pack up camp, hike all day, set up camp. Repeat. When I needed food, along with fellow hikers, I’d hitchhike into town at a road crossing.

The level of nutritional need was alarming. On a 25 mile day, my body would burn about 5,000 calories. I practically drank olive oil and lathered everything in peanut butter. The thought of a greasy burger could become an obsession for days at a time.

December 17th, I finally arrived on top of Springer Mountain, GA. Overwhelmed with emotion, I collapsed at the plaque marking the southern terminus. Over 5 months of fun and beauty and pain and perseverance complete. 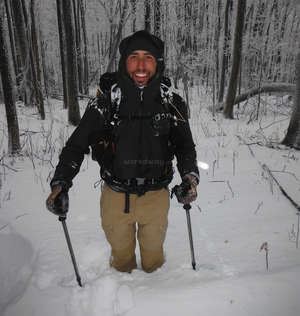 Solo Travel Friendships: 5 amazing #travelbff stories from around the world
Conscious travel: Experience a different kind of Caribbean beach adventure
My 8 Best "Aha!" Moments & Insights From a Decade of Travels
Helping to Build an off-grid Earthship home through Workaway
Creating a piece of self-sustainable paradise on a DIY Workaway farm
What is it like to volunteer at a Chocolate Farm in Costa Rica?