A Globetrotting Couple’s Story with Workaway

At Workaway, we absolutely love getting to know you all whether it be meeting on the road, hearing stories through emails or by actually going on a Workaway trip ourselves. We couldn’t be prouder to be involved in such an inspiring community of travellers!

We are well into winter in most places around the globe (ok, Australia stop showing off!) so we’ve found some of our Workawayers around the world braving it in some of the coldest places. This month we home in on Kel & Eb from Sydney who have been globetrotting using Workaway for the last 3 months and are currently in chilly Iceland!

Hey Kel & Eb, thanks for letting us interview you this month! Can you tell us more about your current Workaway exchange and what it involves?
Kel & Eb:
Hi! Thanks for giving us the opportunity. We are currently doing a 3 month Workaway on the East Coast of Iceland. We volunteer for a family run boutique apartment hotel. The work here is great. It ranges from working in the restaurant, working as a waiter, behind the bar, cleaning the hotel rooms, working on their farm and even building work. We have been here for just over a month now and have enjoyed every bit of it. We had our first white Christmas here and we, along with the other Workawayers here, were allowed time off so we could do a road trip over New Years. 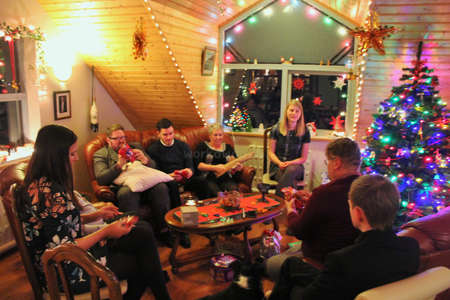 Burr sounds cold yet awesome!Have you done any other Workaway exchanges before this one?
Kel & Eb:
Yes! We have been travelling for 12 months now and in that time, we have done 3 others. The first one was in Siem Reap, Cambodia where we taught English at an NGO
for children in the rural areas who couldn’t afford to go to school. The second Workaway was in Illam, Nepal. We lived with a Nepali family and helped them pluck tea leaves which sounds boring but was actually quite fun and very rewarding. Our third Workaway was in the Faroe Islands. We did daily chores inside and around the house for a family of 5.
That doesn’t sound boring at all! What a globetrotting adventure you have been on so far! What was it that made you choose Workaway?
Kel & Eb:
For starters, it’s a cheap way to travel! It’s helped us a lot. Apart from that though, we’ve always had a mindset of trying to learn and understand the culture of the country that we are going to. Sure, we wanted to see the main tourist attractions, but we also wanted to gain more knowledge and new skills, and at the same time, offer what knowledge and skills we have to our host. We think that Workaway provides a great platform for that. 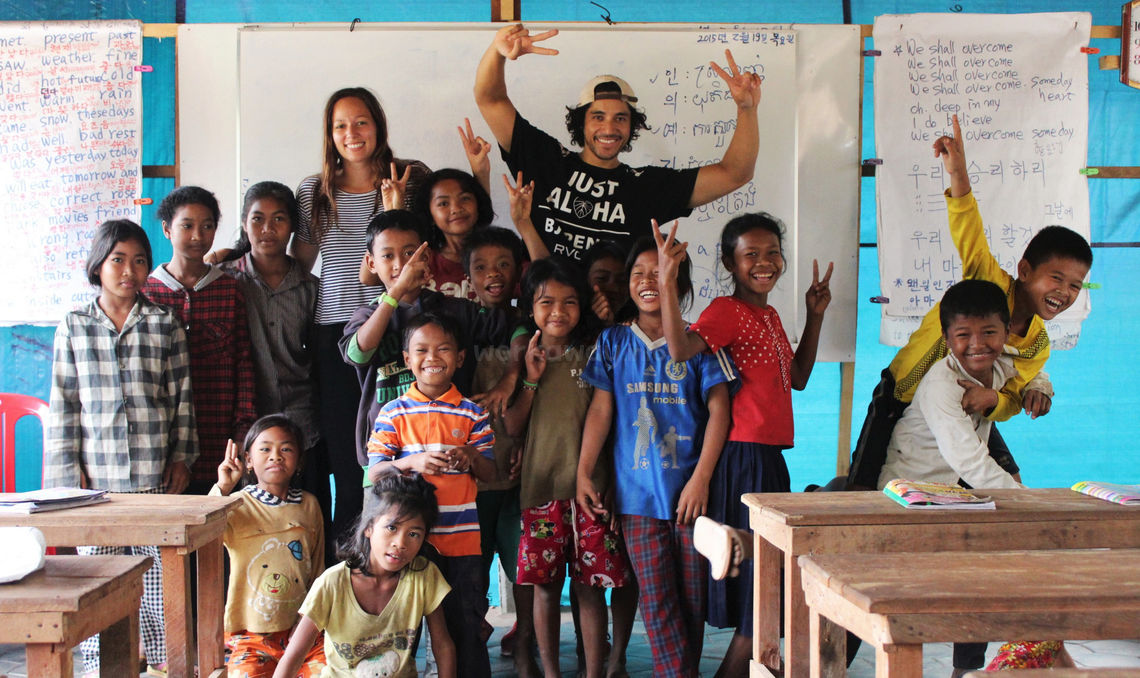 We couldn’t have put it better ourselves! How do you find travelling through Workaway different from other kinds of travel?
Kel & Eb:
You get to go to places other than the main attractions and experience the culture differently to someone who may be there for a holiday. From our experiences with meeting backpackers in hostels, they just don’t have the same mindset compared to other volunteers we have met through Workaway. We first started our travels through South East Asia then venturing into Europe. We made lots of lifelong friends from our Workaway experiences in Cambodia and Nepal. Since then, we have met up and stayed with those friends whilst travelling through their home countries.
As they say ‘friends that travel together, stay together!’ What is the most valuable lesson you have learnt through cultural exchange?
Kel & Eb:
Being in Cambodia and Nepal really opened our eyes. Coming from a country where we have access to education, clean running water and electricity, to being in these rural areas where they don’t have these benefits, but seeing how happy they were with what they have, it really humbled us. 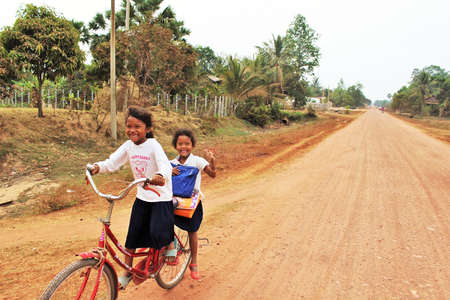 Have you had to overcome any obstacles while on Workaway? How did you overcome them?
Kel & Eb:
Yes, at times we’ve struggled to deal with other personalities. We’ve met other volunteers who we feel abuse the free hospitality and don’t pull their own weight when it comes to work. Or volunteers that aren’t in it for the cultural exchange and just do the work and then close themselves off from the host. There’s not a whole lot we can do in those situations so we just strive to do our best when it comes to the help and to interact as much as possible so that we can form a relationship that’s more meaningful than just a couple that came and stayed. We feel that’s worked as we’ve kept a strong relationship with some of our past hosts. We feel that’s what Workaway is about.
That’s some great advice for want to be Workawayers!What is the funniest thing that has happened to you while on a Workaway experience?
Kel & Eb:
When we were in Nepal, the instructions we were given to find our host weren’t that descriptive. It pretty much said when we arrived in the village to ask the locals which way to go. So we did and we were making progress until we asked one local. We asked which way to Deepak”s tea farm? (which were the instructions we were given) Turns out the local pointed us 45 minutes in the wrong direction to another tea farm who was owned by a guy, also named Deepak. When we arrived at the wrong tea farm, we asked for Deepak. Deepak (the wrong one) came out he was surprised that these two people with big backpacks who didn’t look Nepali knew who he was. He gave us tea, a tour of the farm and factory, and then he finally asked what we wanted? We said we’re here to volunteer! He was so confused and said, but I don’t need volunteers. Then it clicked that we were at the wrong tea farm! He then pointed us in the right direction. When we finally arrived at the right tea farm, we told Deepak (the right one) and he was laughing so much. 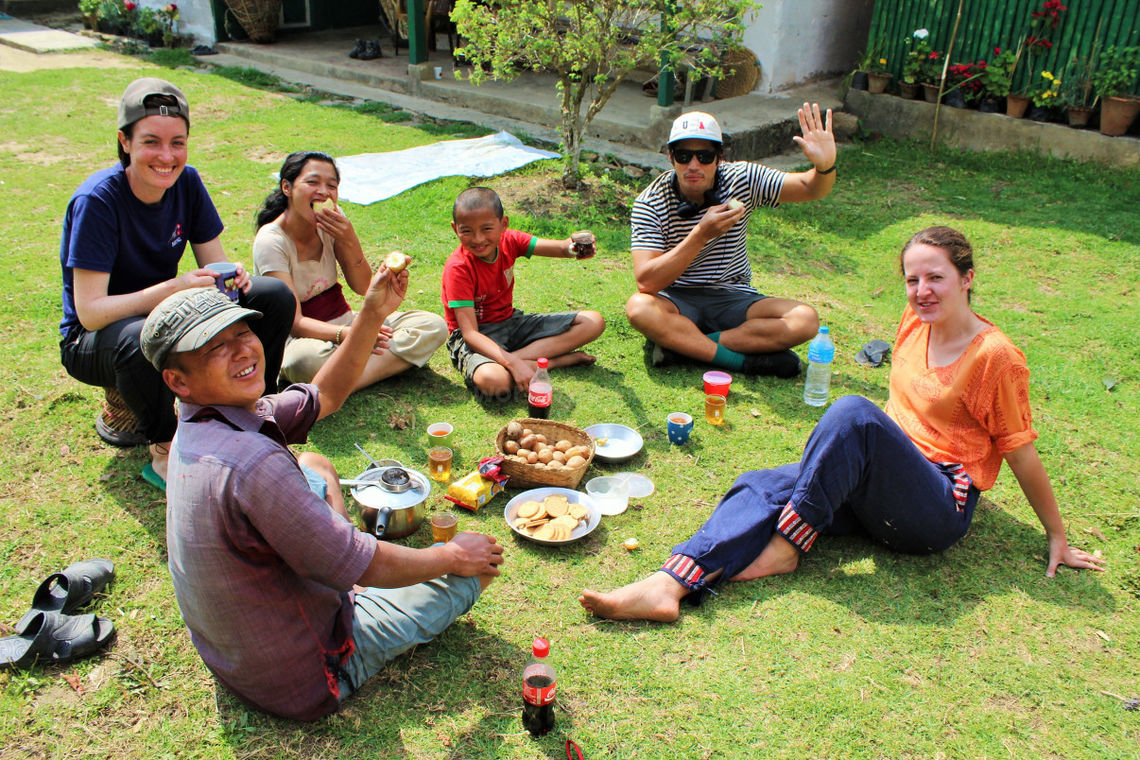 We couldn’t help but laugh out loud ourselves there! But bravo for you for keeping in high spirits after all that walking! Is there anything you wish you brought along with you that you didn’t?
Kel & Eb:
Not really as we knew we would be travelling for quite some time, so we have been prepared for everything. Although at the moment we have been experiencing cold climates in the Faroe Islands and Iceland and we had to buy warmer clothes in these countries. Not the smartest move as it is very expensive. If you’re doing Workaway in cold countries, you’re probably best buying clothes from home.
Do you have plans to do another Workaway? What kind of cultural exchange would you be interested in doing?
Kel & Eb:
Yes! We are heading back to South East Asia after Iceland. We’d both like to do some teaching again and there”re a couple of yoga retreats out that way that we’re thinking about. We’re really drawn into doing Workaway’s in remote areas and plan on doing that throughout the Middle East after South East Asia. 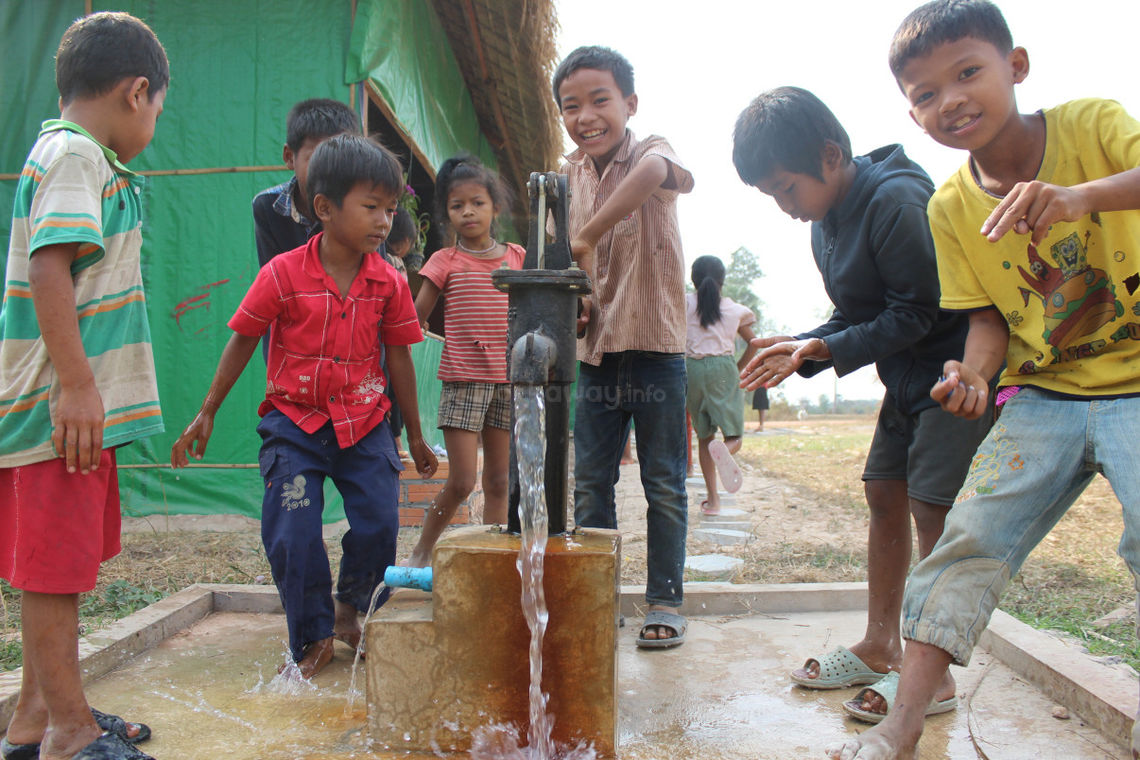 Wow, you guys may just reach every country in the world if you keep this up! If you could give any advice to new Workawayers what it be?
Kel & Eb:
Before you agree to going on a Workaway, you need to make sure everything is out there. Be open with them, read the reviews (if there’s any), ask as many questions as you can. You need to have a good understanding of what is required from you – what days will you work, how many hours and things like ‘you stated I can have a car so will I be able to use that in my own time or just the days off?’ and ‘I’m vegetarian, will that be a problem?’It’s best to know as much as possible, that way when you’re there you’re not unhappy, and if you are, speak up and let them know. And obviously, go with an open mind, don’t have expectations and have fun!

Kel & Eb, you sound like our kind of people! What is your plan next?
Kel & Eb:
After Iceland, we fly to Cambodia again where we plan to do a couple of Workaways for maybe 3 months or so. We travel by cycle touring so our plan is to cycle from Cambodia towards the Middle East and there we’ll decide whether or not to go to Africa or Eastern Europe. Along the way we’ll stop off at Workaways and camp in between. That’s the plan for now at least.
What’s your favourite life motto? And what else do you got to say to all the Workawayers and hosts out there?
Kel & Eb:
Travel while you’re young and able. Don’t worry about the money, just make it work. Experience is far more valuable than money will ever be.Finally we’d just like to thank Workaway for this interview and also for being such a great platform for us to use. It’s helped us extend our travels longer and gain new friendships and great experiences that we don’t think would be possible without it. 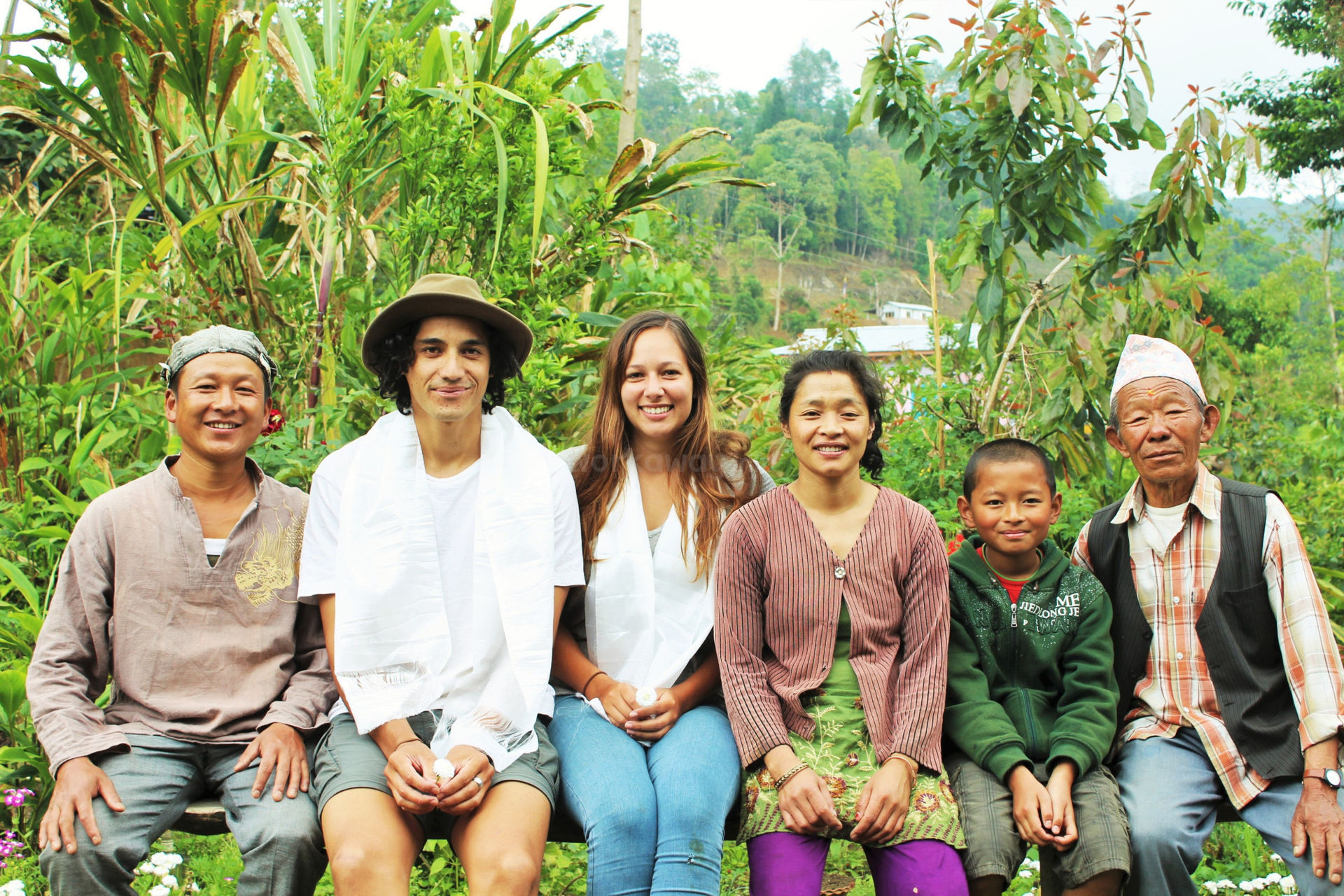 We really love learning about fellow Workawayers. 🙂 Do you want to be featured as our next WAyer of the month? Email us!Happy Travels!