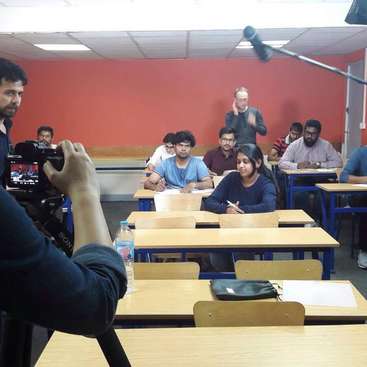 This is kind of the place where we are going to shoot our film. It's a kind of slum.

Feedback left by and about host (10)
28/04/2019
Left by Workawayer (Gyula Sandor & Evgeniya) for host
Sumeet and his family are very nice! We spent there great time. We combined a lot of fun and a lot of work together. What can be better?
Sumeet is a nice person with strong ambitions.
He is at the beginning of his filming career. So he has a lot of theory in his head and now he has to practice practice a and practice.
We filmed together 1… read more documentary, 1 short film and some little videos for an institute.
From first days Sumeet became our friend and we felt ourselves very comfortable and cozy at his place.
His mom cooked delicious food for us every day!

Thank you Sumeet very much for everything! That was a great experience
Hope to see you and work with you again
You can only contact Workawayers who have an active membership.
(Excellent )
23/02/2019
Left by host for Workawayer (Gyula Sandor & Evgeniya)
Sandor is hard working, his camera work is amazing. He cooks delicious food. Evgeniya is good in editing. They have all the stuff for shooting. They are helpful and helped in tasks other than shooting.
They also helped us in making a promo video for institute, and during the time of shooting the short film, they almost worked on feet for 18 hours… read more along other crew members.
They stayed at my house for 2 months and helped me in shooting 2 films, one short film and one documentary.
They are clean and maintain rules of the house. Sandor even drives car and that was a big help to my family. Evgeniya, despite being sick, she continued to work on editing. They are friendly & polite in nature, they interact with people very easily, and create a very pleasant environment around. They are respectful and good educated. And the girls at the institute really like Evgeniya's teaching style.
I am still contact with them and Evgeniya is still working on some of my project. I strongly recommend them.

(Excellent )
28/11/2018
Left by host for Workawayer (Sylvain)
He is very skilled in Sound and Music and it was our good luck that, Sylvain joined us. He gave his best to make the film as good as possible. He is hard working and cooperative. Despite being sick, he worked on the set as well as composed the excellent music. Overall it was team's good luck that Sylvain joined us.
Hanlu also helped us in… read more research and making presentation better, although she didn't join due to issues with visa, despite all troubles she helped us in responding emails and writing best possible content.
And not just sound and music, Sylvain also helped my cousin for his Photoshop work and mental therapy, so he is a volunteer that can work in any field.
Strongly recommend both of them.

(Excellent )
28/11/2018
Left by Workawayer (Sylvain) for host
Taking part in a film and discovering India at the same time is definitely a great experience.
Sumeet and his family have been most welcoming and made me feel like a part of the family. I got to see and understand life in Rajasthan from inside and this experience will always stay with me.
I would highly recommend it but be sure to have the skills… read more required as a film needs the best from you.
Sumeet has become a friend and we will most likely work again together.

You can only contact Workawayers who have an active membership.
(Excellent )
17/11/2018
Left by host for Workawayer (Boris ( Jordi))
So Mr. Boris, the celebrity of the town.
He is very hard working person, having an experience of more than 30 years in the film industry.
He has good knowledge in lighting and sound.
It was a jackpot for us, when Boris joined the crew.
Silvia is also hard working & supported as the creative director of the film.
I strongly recommend Boris &… read more Silvia.

(Excellent )
15/11/2018
Left by Workawayer (Boris ( Jordi)) for host
when i star workaway i was not sure to find rigth people and right project, i ve to say thanks to Summet for let me participate of his great project, i ve been so confortable on his house i felt like home, thanks to his family to make a such incredible meals and thanks to his project it was an a amazing work and i wish all the best. Gracies Moltes
(Excellent )
15/06/2018
Left by Workawayer (Yu Hang) for host
It’s an amazing experience for me. Although the I don’t understand Hindi, Sunmeet still count me as part of his team an we go around India to find cast, equipment and location. Indie-film is always hard to produce because of the lack of financial support. But we just make it! And Sunmeet like a baby sister, always care about me. Some time, I hope… read more I can know Hindi and share the workload of him.

Also, l really like his mother food. It’s tasty, I just feel like I am home. I miss my family! Jodhpur in this season is really really really hot, again, its hot and dry! It is one of the big challenge for me. I can’t stop drinking water and get wet all the time, it is so easy to get tired when I walk under the sun in the afternoon. Btw, when we go the the village for shoot. It is very nice to sleep on the rooftop with the star and much cooler than indoor. We become a fd, also with his team member.

It’s memorable thing I have done in my life. I hope I will see you again!

You can only contact Workawayers who have an active membership.
(Excellent )
05/06/2018
Left by host for Workawayer (Yu Hang)
Cheuk is 100% professional cinematographer. He works very hard and never complain about anything. Each and every member of the crew was praising Cheuk for his hard work. Being honest if Cheuk would not have been there, it would be impossible to shoot the film. I recommend Cheuk and he is far far better than an ordinary cinematographer.
(Excellent )
19/04/2018
Left by Workawayer (Willy) for host
One of the best things I did in India so far. I felt part of something big and special than just go to a new country for sightseeing. Sumeet has a great mission, I dont know if he has an total idea about that gift, but with this project he can save and change many many lifes. At first I was just helping with my social media skills, but after… read more learning more about the sad story of Kakoo and visit the Pakistani refugees many things change in our work. Also we had a lot of nice time together, he introduce me his friends, the Pali's way of life and his nice family (his mother take care of me as a son). If you have opportunity, skills and know how to help him with this film, please, do it! It's a kind of thing to be pround of in the end. Good luck, bro!
You can only contact Workawayers who have an active membership.
(Excellent )
16/03/2018
Left by host for Workawayer (Willy)
WIlly is super amazing hard working person. He has good command in marketing and especially online marketing. He has more than 26.5 thousands followers on instagram, which proved very helpful in our project and it's promotion. He is very hard working and used to work till 6 in the morning and sometimes till 7:30. Over all experience with Willy was… read more amazing. On more point I would like to add is Willy really helped us in organizing the project in proper way and also he helped us a lot in promoting our crowd-funding campaign.
(Excellent )
Please log in and visit this profile to leave your feedback.
Host ref number: 288759486934
Homestays, Volunteering & Working Holidays in IndiaHomestays, Volunteering & Working Holidays in AsiaHomestays, Volunteering & Working Holidays in RajasthanIndividual IndiaLast minute Homestays, Volunteering & Working Holidays in India
To contact a host, please login with your username and password or register with workaway.info.
My host list0
Give the gift of Workaway
read more

Help in the house and outside in a beautiful countryside in Limoise, France
(5)

Family looking forward to improving the language skills of our baby in Villa de Leyva, Colombia
(5)

Come to Israel, we want to practice English with you. (During Spring or Summer)
(8)