Learn about permaculture and enjoy living on a horse ranch in an intercultural family environment in Aranjuez, Spain 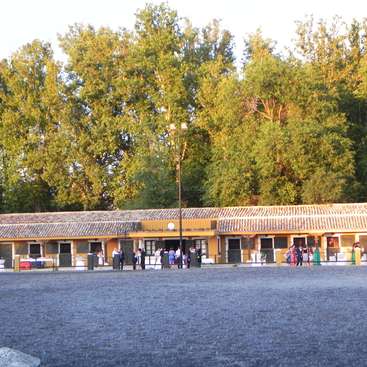 05.04.2020
Vom Workawayer (Bryan & Sarah) für Host
We had the most wonderful experience staying with Joseph and Anca!

Everything is as described. Cultural exchange is at the forefront here, continuing into the few hours you work. We learned so much from the family - they even took an active role in improving our spanish (even little Joe got involved).

Daily life includes family meals, work and… read more ample time to study, relax or explore the area. The work was never too hard or demanding - Joseph and Anca would always work with you, and twice as hard, and there was always something to learn. Overall, there was a good team atmosphere surrounding everything. Schedules and work assignments were also flexible.

We will always remember our stay for the proper sit-down family meals, the cultural conversations lasting into the night, and the laughter from Emma and Joe's hilarious antics. Oh, and Loki - our favorite gato.

If you have ever wanted to experience life as a part of Spanish family, this is the workaway for you.

Du kannst nur Workawayer mit aktiver Mitgliedschaft kontaktieren.
(Ausgezeichnet )
10.03.2020
Vom Host für Workawayer (Bryan & Sarah)
Bryan and Sarah, I am sure you are well on your way around Spain by now…. firstly, we wanted to thank you for choosing us as your first ever workaway. Brian, Joe is still explaining to us how H molecules and O molecules join together so you have definitely inspired one more kid to know more about Chemistry. We have also had a crash course on… read more Bikepacking and that you do not need public transport or a car to get around a country. Jaja

Bryan and Sarah landed in Madrid at Barajas and cycled down to Aranjuez the next day. Went to Decathlaon in Getafe shopping on the bike and also visited Toledo, Castillo de Oreja and the surrounding areas of Aranjuez. We also had a chance to eat a lot of spicy food and try a few new delicious dishes like black bean burgers and Pashtida style with Zucchini. We have also learnt a lot about Taiwan, California and Ohio.

Sarah is a smiling happy easy-going person to be around. She loves playing with the kids and is very artistic. We will have you in our memories for a very long time with your amazing video animation in Adobe after effects for www.jajafun.com and also your drawing comic lessons with Joe. We look forward to your summary of Spain and if your dream goals come true, we may even see you sometime in the future back here in Spain living or studying for your PHD. Who knows?

(Ausgezeichnet )
01.04.2020
Vom Workawayer (Cat & Adrian) für Host
We had such a good time at the finca. The work was challenging at times, but satisfying to get stuck in and finished. The place is lovely and in a great location, with the tranquility of the country, and beautiful aranjuez and Madrid so close by. Anca and Joseph made us feel very welcomed as we enjoyed outings with them and BBQs with their family… read more and friends. They also gave us heaps of travel tips and entertained my awful Spanish. Our daughter had so much fun with Joe and Emma and loved joining them on trips to the library, playgrounds, swimming, museums and scouts, and just adventuring around the house and garden. We will miss their crazy antics and there were tears in the van after we left. We are looking forward to welcoming you into our home back in New Zealand someday.
Du kannst nur Workawayer mit aktiver Mitgliedschaft kontaktieren.
(Ausgezeichnet )
10.03.2020
Vom Host für Workawayer (Chester)
We are so happy we had the opportunity to spend time with Chester. We have learnt how Singaporean noodles are not even from Singapore! We have enjoyed authenticate local food which Chester was willing to try and cook for all 10 of us staying in the house. I will also not forget his perspective of conditioning on societies and how this influences… read more generations.
Many thanks for teaching our children mandarin, your hard work to dig out wood some wood stumps, help in collecting seeds to be planted again this year in the summer camp and your detailed explanations and questions. Chester was willing to learn as much as possible and makes some great photos too.
We truly hope to see you back in Singapore if you manage to keep still long enough and if not, we may cross each other on any future travels around the world. Look forward to keeping in touch in the future and have a safe trip eventually back home to your loved ones.

(Ausgezeichnet )
23.02.2020
Vom Workawayer (Chester) für Host
An absolute pleasure to have been able to live with this family for three weeks.

Everything was as described and in case anyone was wondering; the location is stunning. Joe and Anca's property used to be part of the King's summer palace grounds and still retains much of its royal charm even till today. The very energy of the surroundings felt… read more simply from riding on the wide empty roads in between the rows and rows of trees on each side is something I will carry with me for quite a while.

Joe, Anca, little Joe, and Emma, as I'm sure has already been mentioned here, are an extremely accommodating and warm family. Joe and Anca are very knowledgeable on a wide range of topics which made for stimulating conversations every time. The kids, on the other hand, kept a perpetual smile on my face throughout my time there.

Food was always delicious and aplenty, and the area around Aranjuez has a few gems of its own if you don't mind going for a wander on the bike.

Like I said guys, I would have stayed longer if I could. Best of luck with the future workawayers. I know the camp is going to be nothing short of a hit with the kids. Appreciate everything you've said and done. Perhaps Singapore one day?

Du kannst nur Workawayer mit aktiver Mitgliedschaft kontaktieren.
(Ausgezeichnet )
13.02.2020
Vom Host für Workawayer (Alejandra)
Alejandra ha estado enseñando yoga a los peques y también ha aprendido hacer papiroflexia con ellos. Hemos disfrutado toda la familia de su comida y ha sido muy detallista con la casa. Nos han faltado horas para hablar en las largas noches y nos encantaban los desayunos que nos preparaba en las mañanas.
(Ausgezeichnet )
01.09.2019
Vom Host für Workawayer (Mauro & Jennifer)
Mauro and Jennifer came to us for one month to improve their Spanish and spend time with Children on our Summer camp. Work with the heat of 40º in Summer was not easy for them but Mauro worked very hard to keep up. As a Ski instructor he know how to play games with children and have fun. We managed to prepare the building blocks for out outside… read more natural wood playground and also clean all the weeds out to prepare the rest of the pottage garden to be prepared and planted for next spring. Mauro even advanced very well with the concierto de Aranjuez on the Guitar. Jennifer is a great drawer. Our little one has already said a few times that he would love to draw like her. Have fun visiting the rest of Spain :)
(Ausgezeichnet )
26.06.2019
Vom Host für Workawayer (Xander & Alexandre)
Alex and Xander many thanks for ending your 10 month trip around the world at our place in Madrid. We really enjoyed your stories of all the countries you have visited, experiences and cultures learnt. We also now have a big incentive to go visit Mexico and Chicago.

We managed to clean a pool restore the tennis area, clean out all the weeds in… read more market garden area and even spend sometime with the 4 to 12 year olds at the summer camp on the farm.

Please keep in touch and your welcome to come back whenever. We hope we were an exception to other experiences you had on workaway.

Thank you so much for having given me the chance of getting to know your life and becoming a part of it. I have learned so much these past six months and would not want to miss any of the experiences.
You showed me many new and interesting things, especially in the garden, and helped me to improve my spanish.
Thanks a… read more lot!
I am also happy that I could spend time with little Joe and all the others around (Emi, Jesús, José, Muni...), support you with building the pottage garden and trying its fruits and vegetables (the handmade jams are so tasty!).

I wish you all the best for your family and hope that especially the youngest one and her mother are doing well!

All the best for your future plans,
Judith

(Ausgezeichnet )
17.06.2017
Vom Host für Workawayer (Judith)
Hi Judith,
How quick 6 months together have flown past, with two different seasons, several countries visited and a lot of KMs together. Since coming in January till June we have accomplished and enjoyed many aspects of the hardworking nature of Judith. We have nearly finished the basic design of the whole pottages garden which is over 7000 mt2… read more (not a light task) and planted several new fruit trees. Judith has helped our son improve his German and spent many many mornings in pruning, gardening and seeding. We wish you the very best in Berlin and look forward to seeing you in the future.

PS: You missed making apricot marmalade by 7 days.... but at least you got to enjoy eating brownies made on the woodstove. Yumyum

(Ausgezeichnet )
03.10.2016
Vom Workawayer (Devin) für Host
Thanks for welcoming me and Thunder into your home. It couldn't have come at a better time, and it really helped me get my plans for the future in order. It was a refreshing break from hostel hopping and the city life, especially for Thunder! I really enjoyed the atmosphere there and I was happy to help out with whatever I could. It was great to… read more be back on a farm, and to be welcomed so warmly. I also really enjoyed talking about the various profundities of life and learning during some of our sobremesa philosophy sessions haha. I hope the whole family is well!
Du kannst nur Workawayer mit aktiver Mitgliedschaft kontaktieren.
(Ausgezeichnet )
30.09.2016
Vom Host für Workawayer (Devin)
Devin and Thunder both helped out in cleaning up a large stack of firewood and keeping Pepito happy too :) had great long conversations at night time and in the morning and a person who is willing to help out with all tasks. Best of luck in Germany to the both of you.
(Sehr gut )
08.09.2016
Vom Host für Workawayer (Laura)
Great couple to be around who were willing to help out in all aspects. From re varnishing the floor from the house to cleaning the pool out. Many thanks for the two weeks you helped out so much and I hope you had a very pleasant time in the rest of Spain.
(Ausgezeichnet )
06.07.2016
Vom Workawayer (Ann-Kristin) für Host
It was a great experience! I met some very nice and interessting people (Anca, Joseph and Baby Joe) and had a lot of fun with them! Thank you again for your lovely hospitality and the great time we spend together! Hope to see you in Switzerland one day! ;)

p.s. I m happy the card box house did survive until now and that Baby Joe has fun with… read more it! :D

Help and learn at our solar powered, earth home and sheep farm between the Tisza and the Danube rivers, Hungary
(11)

Help in a destination of nature tourism and Astronomical observation near to Popayan, Colombia
(24)