Help at a hostel in Valparaiso, Chile 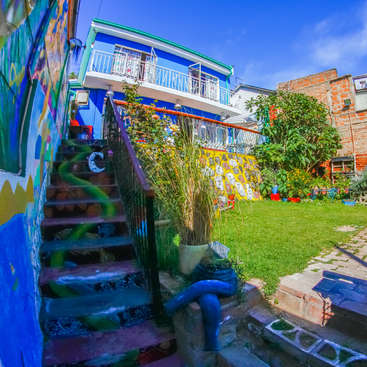 10/06/2020
Dejado por el workawayer (Lucia) para el anfitrión
Sorry for the late feedback, because of Corona everything was a bit chaotic in the end so I couldn't write the feedback earlier.
The stay at the place was the best I ever had in a hostel, even better then I expected.
Due to the special time - manifestations and then Corona, there weren't so many guests, so it felt like living together with… read more friends.
The hostal is small and cozy. Very clean. The tasks are not heavy, and Camila is still helping.
Camila, the manager, is super nice, she tells clear what to do and is super relaxed and flexible with the schedule :-)
The location is perfect, with a nice view over the harbour.
Also I really appreciated that the volunteers have their own simple apartment, which is super close.
Every day all the volunteers (and guests) hang around together, one day we had an art exhibition of one of the volunteers, which was super nice as well.
All in all I felt living in a family/friends house and enjoyed the time in wonderful Valpo.


(Excelente )
03/09/2019
Dejado por el workawayer (Natacha) para el anfitrión
I 100% loved Valparaiso and I 200% loved this hostel. It was the most welcoming, relaxed, and agreeable hostel I have ever volunteered it. Cami is just so nice and helpful, you barely feel like you are doing any work at all! Especially during low season where things are quiet during the week. The set-up for the volunteers is also nice, with the… read more volunteers' house just a couple of minutes away.

I will miss this place (I already do after one day of leaving it...) and the people I have met, especially the king Luza!

(Excelente )
22/03/2019
Dejado por el workawayer (Valentina & Diego Alejandro) para el anfitrión
This volunteering was excellent! All the people involved with the Hostel, from Volunteers, guests to Administration have the best disposition and attitude to work! The hostel has the atmosphere of a home, where each new person who arrives becomes a new member of the family. The tasks are simple and well explained and new ideas and projects are… read more always welcome. The place and the location are bright, colorido and amazona! Thanks to Camila and Franco for the opportunity to find our little blue house in Valparaíso! We hope to return very soon

(Excelente )
02/01/2019
Dejado por el workawayer (Chris) para el anfitrión
Really enjoyed my two month staying here after I was actually just planning to stay for two weeks, but had to wait longer for a package from Germany and got stuck in Valpo :D Spending christmas and New Years Eve here was also pretty nice, Valparaiso is the perfect city for this. At the hostel I felt very welcome from the first day, although it was… read more maybe sometimes difficult for them to deal with my crazynesses. Work here is pretty chilled and the first days of my stay I shared shifts with other colleagues who've been here for longer. Most of the volunteers sleep in another apartment that's not even 5min away walking with an incredible view.
Voy a extrañar todo la familia! Un abrazo, Chris

I arrived as a host with only staying there for a week in mind, but I ended up spending about a month a half in total. With almost two week of that as a volunteer. I had an… read more amazing time there, it's a very little cosy place. We worked, we sang, we partied, we cooked, we had fun, together.

(Excelente )
06/11/2017
Dejado por el workawayer (Tijana) para el anfitrión
I stayed for one week here and then for another day, and then for another, and another. It was like being home. I didn't feel like working but rather like helping in my own house. Franco, Fran, and Camila are all wonderful and positive people. They welcomed me warmly and made sure I didn't lack anything.
The hostel is very small, cozy, and clean.… read more Also, the kitchen is fantastic and equipped with everything. All in all, I can only say that I had a wonderful time. And I highly recommend this hostel to volunteers as well to guests. The location is great and I could walk everywhere.
Thank you for having us

Join our NGO and help us with teaching in jinja, Uganda

Eco conversion of our home with your help in Caldas da Rainha, Portugal

Volunteers needed at a school in Karnal, Haryana, India