Help with childcare and around the house in beautiful Donostia, Basque Country, Spain 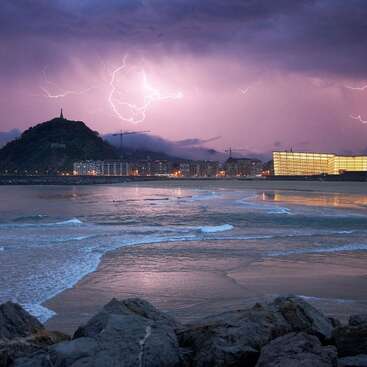 Feedback vom und über den Gastgaber (4)
10.11.2019
Vom Workawayer (Kayla) für Host
I have had such a great 7 weeks with Maite, Ainhoa, their son Ibai (1) and daughter Sua (4)
After 6 weeks of travelling around Europe I was quite exhausted and wanting some routine.
The work is not hard, Ibai is a easy beautiful baby (fell inlove!) you look after him from around 830 to 130 - sometimes earlier, sometimes a bit later. Sleep,… read more walks, parks, he loves being outdoors. (Beautiful parks all around) You pick up Sua 2 x per week from school (or whenever the girls say)
I was worried about the language barrier but there is nothing to worry about, the girls both speak English very well and like speaking English to learn more. It is a little tricky with Sua as she only speaks basque but is learning more English each week and you can get by fine.
Maite and Ainhoa made me feel very comfortable straight away, it was very easy and I felt at home in there cute little apartment within a few minutes walk to the beach!! Few daily chores tidying up, bins out, laundry etc etc.. nothing you wouldn’t expect.
I absolutely loved all the meals the girls made for me! I am taking home a lot of authentic basque recipes that are so healthy, yummy and easy!
Weekends are free and there’s a lot to do in San Sebastián- I personally just loved lazing at the beach but there is so much to explore!

Du kannst nur Workawayer mit aktiver Mitgliedschaft kontaktieren.
(Ausgezeichnet )
10.11.2019
Vom Host für Workawayer (Martha)
Martha is a nice girl and kind ready to help and learn different things.
However,we consider that she was really selfish and irresponsible since she left us without any previous warning and apparently being really happy with us.
We had 3days holiday in Madrid and coming back was shocking because she was gone leaving us a simple note saying that… read more she was sorry,we were lovely,but she was homesick. That was Sunday night and it caused us a big mess to organize the week without her help.
We think that communication is essential and also respecting other people.
Unhopefully,after a long and great experiences with workaway this was a pity,sad nd awful experience.

(negativ )
18.08.2018
Vom Host für Workawayer (Rudi)
Rudi has been a great helper for our family. He is very talkative and nice person and he has managed very well with our little daughter. Even if he is sometimes a bit scatterbrain, he is a good person and responsible.
(Sehr gut )
09.05.2018
Vom Workawayer (Rudi) für Host
My stay with Ainhoa with Maite and Sua has reached its half way mark and I definitely feel in a position to give some
feedback for anyone considering coming and staying with them here in San SebastionDonostia.
Firstly (and which was very important for me as a surfer) as they mention they live only minutes away from the main beach on the Atlantic… read more Ocean, Zurriola Beach. One of the most popular beaches in Europe. And as well as this there are literally 100`s of cafes and bars spread out throughout the beautiful city.
Looking after Sua and picking her up from school each day is a very pleasant task.
Apart from that, doing a few mornings cleaning of their newly refurbished apartment is all that is expected of you.
The reason Ainhoa and Maite prefer someone fluent in english is that Sua will learn it too.
All in all staying here with them in San Sebastion definitely fulfills the basic criteria for Workaway stay: An balance of host being generous and a `guest` carrying out their expectations with a mutual respect!

Join in our family life in beautiful Wicklow Town, in Ireland
(7)

Live on a secluded organic hobby farm surrounded by beautiful nature on the Central Coast in California, USA
(6)

Help for house and child care in Izmir, Turkey
(5)

Looking for support in preparing the land for community in Sicily, Italy
(7)

Help renovate an old farmhouse in a beautiful area in Servas, Southern France
(2)