Help young family with housework and childcare in a hill-top house with stunning views in Auckland, New Zealand 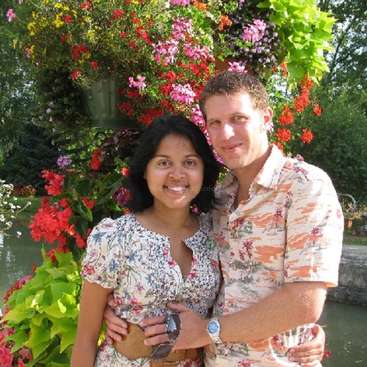 27/06/2022
Dejado por el workawayer (Paul & Clara) para el anfitrión
Garrick and Maheesha are the best host that you can find in N-Z. Our time in their family was wonderful.
The place where they are living is really nice, clean and confortable.
The job is really rewarding. Garrick and Maheesha are really flexible about the planning. Don't be worry they will leave you the time to visit the country side around.
I… read more can continue to write during hours all the arguments in their favor but you just need to know that by choising Garrick and Maheesha you will not be desappointed and you will live your best kiwi experience.


(Excelente )
01/03/2020
Dejado por el workawayer (Sarah & Daan) para el anfitrión
Our stay with Garrick, Maheesha and Rohan was our first workaway experience and it was perfect! They agreed on accomodating us very last minute. We could stay for ten days and helped cutting gorse, weeding other plants on their big and beautiful property. It's a private jungle! And helped building part of a retaining wall. Garrick and Maheesha are… read more really easy going. We had our own room, there was a wide choice of food to make our breakfast and lunch. And dinner was shared. They both are wonderfull cooks! We worked in the full day working - full day off system. It suited us well because you can make great work progress and enjoy a full day off. Garrick had the greatest daytrip tips and they always found a way to bring us and pick us up again. Thank you both very much! And high five to Rohan!
Solo puedes ponerte en contacto con workawayers con membresías activas.
(Excelente )
04/12/2019
Dejado por el workawayer (Viken) para el anfitrión
Maheesha and Garrick were absolutely amazing hosts!
I really enjoyed my time nearby Auckland thanks to them.
While I, was staying at Garrick and Maheesha's I used to work one full day and have the following day off but they were really flexible with that. It was nice to help them with the work they needed to do in the garden. I learnt a lot about… read more gardening with Garrick. He is a decent and interesting person. He always welcomed me with a nice beer at the end of a good day of work.
I also got the chance to take care of Rohan for one night, he's a cute little boy with a good temper and lots of imagination even though he talks a lot about space shuttles ;)

Other than that I had great conversations with Maheesha about New Zealand and English culture.
As well they took me to the best places around to visit the area between Bethells Beach (which was sooo beautiful! One of the best landscapes I've seen in New Zealand) and Auckland.
Moreover, their home is gorgeous and very comfortable, you would love to see the amazing view from the balcony every morning.


I'm sorry it took me all this time to give you that comment. I'm deeply and genuinely grateful for meeting you guys, thanks for making my stay in New Zealand memorable. Thank you for everything.
Take care of you.

Solo puedes ponerte en contacto con workawayers con membresías activas.
(Excelente )
17/05/2019
Dejado por el anfitrión para el workawayer (Viken)
Viken was our guest for initially two weeks, we liked him so much that when he asked to extend his stay we were delighted to have his company for longer.

Not only a great guy to have around, but also an independent worker, showing initiative, and works hard to get the job finished, going above and beyond.

We were sorry to see him leave.

(Excelente )
30/11/2019
Dejado por el workawayer (Hannah) para el anfitrión
It was such a great experience to stay with Garrick and Maheesha.
I could not have wished for a better place to stay for my first weeks in New Zealand.
Garrick showed me so many great walks and had always advice what to do on my off-days. It was always a pleasure to talk to Maheesha about series, society and sports while drinking a cup of tea. She… read more even took me to her yoga and sports class.
They both helped me whenever I had questions and drove me to the train station or to walks whenever I had time and wanted to go to Auckland or to explore the area.
Their house is very nice and I couldn't get enough of the view outside the living room.

I stayed with them for 2 and a half week (thankfully I could stay a few days longer until my next workaway job) and helped them in the garden or in the house with a little bit cleaning and cooking. There are many jobs to do so it doesn't get boring.
After a long day I enjoyed eating dinner with them and drinking a cold (ginger) beer.

I really enjoyed the time I stayed with them and I am so grateful for everything.
Thank you for the great time and maybe we will see us again before I leave New Zealand!

Solo puedes ponerte en contacto con workawayers con membresías activas.
(Excelente )
20/11/2019
Dejado por el anfitrión para el workawayer (Hannah)
It has been our pleasure to have Hannah stay with us over the last few weeks. Hannah has been a great help to us both in side the home with cooking and child care and outside on garden projects.

Jobs she has helped us with include digging and building steps down a steep bank, weed spraying, window washing, gorse cutting and general help around… read more the home.

Hannah has shown initiative and works to a high standard.

Hannah is polite, and respectful and great to be around, we will be sorry to see her go.

(Excelente )
12/02/2019
Dejado por el anfitrión para el workawayer (Noah & Alice)
Noah and Alice stayed with our family for a few days, and worked tirelessly on some really hard jobs in the height of the summer heat. Both Alice and Noah helped out building a retaining wall, operating a petrol post-hole borer, weed-spraying with a knack-sack and flax pruning all of which were new to them. True grit was displayed. We would have… read more loved to have them stay longer but unfortunately they left early to pursue another opportunity.
(Muy Bien )
26/12/2018
Dejado por el workawayer (Amber & Louis) para el anfitrión
We stayed with Garrick, Maheesha and Rohan in the Waitakere Ranges for two weeks, and we could not have asked for a better family as our first Workaway experience. Garrick is a never-ending flow of information about trails and tracks in the ranges and what to do on your free moments, Maheesha is an amazing cook and Rohan is probably the happiest… read more toddler we've ever met ("Henry!"). We were often rewarded with a cold beer after a hard days work. We could also help ourselves to an endless stream of tea, cracker, cookies and more.

We agreed to work on a full day work/full day off system, which we liked better than a half day every day.
We would not hesitate to come back here.

We helped them with tasks around the house and garden. Mainly involving weed-eating, pruning (oh, how we love flax plant!), planting, landscaping, digging and other DIY chores. Even when some chores get tiring, with lots of smiles and biscuits and beer in the end, you… read more always finish with positive mind :) We agreed on work system one full work day/one free day, which was better in many ways. We also watched over little Rohan (baby shark!) sometimes, who's always full of energy. So for that we built a trampoline to keep him busy even more .

House is located in beautiful Waitakere ranges, close to Auckland. From the living room terrace you can always watch fantastic "jungle" woods with numerous species of animals around, especially birds. Particularly in this area you can spot also tropical parrots! And when you have a break it's just few steps to the bush or few minutes driving to many beaches in area.

Garrick and Maheesha opened their house to us and made our first workaway experience great!
Not to mention that Garrick helped us a lot with opening a bank account and other stuff we needed. Gave us a lots of tips where to go, etc.

Thank you guys for everything and we will see each other again before we leave NZ :)

(Excelente )
06/12/2018
Dejado por el anfitrión para el workawayer (Petr)
We were lucky enough to have Peter and Veronika stay with our family for 3 weeks over November.

We thoroughly enjoyed our time with them both, and they proved to be excellent guests, being not only great company but all so hard working.

Peter and Veronika helped us with many tasks around the property, including weed-wacking, pruning, laying… read more weed-mat, not to mention the arduous task of digging trenches for drain laying. They also spent quality time with our toddler keeping him entertained.

All task were carried out in good spirits, and they both showed ingenuity and worked without supervision.

I would recommend them both, and welcome them back to our home anytime.