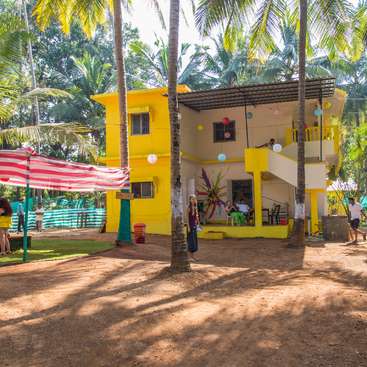 Comentarios escritos sobre este anfitrión (2)
10/04/2018
Dejado por el workawayer (Dylan) para el anfitrión
This is a chain of five hostels in India. I was placed in Anjuna, Goa, (their headquarters) to handle photography and graphic design. Over my roughly three weeks, I ended up designing for a British tour company they partnering with.

The hostel was small and comfortable. March-April is the beginning of the off-season, but there was still plenty to… read more do and lots of people to meet. I got on well with the staff, another volunteer, and the guests. Anjuna is a little grungy on the outside but has a lot of character. Parties on the nearby beach every night. A market on Wednesday and nearby on Saturday. It's easy to rent a bike or scooter to jump around to other nearby towns (Vagator, Morjim, Baga). Generally, people come here to relax on the beach, imbibe, and dance. If you aren't into loud music or party scenes, this might not be the place for you.

I had an air conditioned dorm room with a pillow and sheet. A locker. A complementary breakfast and two free meals a day (largely rice, dhal, and vegetables). There's plenty to try and eat nearby as well if you want. I worked a couple of hours during the weekdays designing and sharing photos and had the weekends off. Honestly though, there isn't a lot of direction when it comes to the work. The staff is busy and pretty laid back--so contribute how you see fit.

Help to improve english to children with childcare and some home works in Olbia, Sardinia, Italy

Help with garden landscaping and creating a beautiful outdoor space in Malaga, Spain
(3)

Help setting up a kids friendly guesthouse in Kampot, Cambodia
(21)

Come enjoy this beautiful part of rural France and help out around our family home, Aquitaine, France