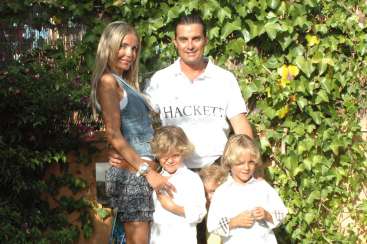 I am Ilse Kooij and I am 21 years old. I live at home with my parents and 2 sisters. I have an older sister named Rianne and a twin sister named Marjon. Rianne is a teacher and Marjon is an officer at the Dutch Royal Military Police.

This year I finished my study of aviation services. (Cabine attendant and groundhandling customer services). For this study I had to study English and Spanish aswell, but I really want to improve my Spanish furthermore. I worked as a trainnee for City Jet for the last half year and worked all shifts.

I really like the Spanish culture, food, language and way of live. Every year we visit Spain for our family vacation and everytime I visit Spain I feel at home. I can understand the conversations but to participate and speak I really need some more practice.

In the past I used to play handball on a national level so I know how to work and deal in a team. Because of an injury I had to quit

I have got a lot of experience with children, babysitting and taking care of my cousins. I also used to train children at the club to play handball. My main goal was to learn the skills by also how they can become a better team together and having fun in their sport. I really enjoyed this. I like to play and to do things with children.

Besides that I can help you in and around the house. At home I am used to help my mother to take care of the daily shopping, to wash and dry clothing and to clean the house. The reason we have to assist my mother with the house keeping is because my mother has a fulltime job at the hospital. Sometimes she doesn't have the time to cook for example and we have to cook for ourselves.

I find it difficult to describe myself but as feed-back from fellow-students and teachers I receive the following words: reasponsible, helpful, spontaneous, social, reliable, friendly and stress resistant.

Your profile attracted my eye, I would love to help you with the children and your Household and this would give my the opportunity to improve my Spanish and give me time to think about my future education.

I finished school already and I have no further commitments. I can start whenever you need me.

Enjoy nature and a historic home and help our family in beautiful village Stolberg, Germany
(2)

Help landscaping my garden and with other tasks in Surrey, England
(13)