Come and join our place for yoga on a wonderful Greek island, Polis 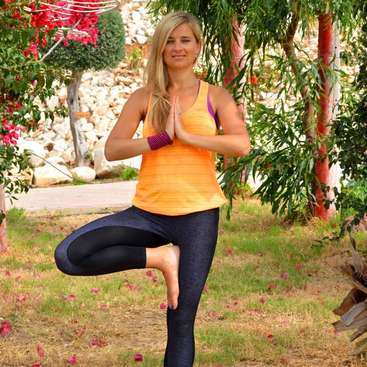 Comentarios escritos sobre este anfitrión (3)
24/12/2016
Dejado por el workawayer (Didier) para el anfitrión
Solo puedes ponerte en contacto con workawayers con membresías activas.
(Muy Bien )
17/12/2016
Dejado por el anfitrión para el workawayer (Kimberley)
Kimberley joined us for one month to help with the yoga retreat. Unfortunately, the retreat was cancelled, but Kimberley was wonderfull and helped us with a lot of different jobs. She is a great and warm person, we are happy to meet her. She is positive, open-minded and helpful. She is not afraid to work with her hands or to have more… read more "intellectual" tasks needing to stay at a desk. Always keeping the smile, even if she did not do what she was suppose to, she gave the best for us and we are sincerly greatful that she join us for a while. Having Kimberley as volunteer is a nice opportunity to meet a wondeful lady !
Wish you all the best for the future :)
Reception Team :)

On arrival I found out that the yoga retreat had been cancelled. I still thought I would be able to attend yoga classes, of which I did initially (and Lina the yoga teacher is LOVELY) but these also dwindled to 1 or 2 per week as the hotel was almost… read more empty.

And so, I was given other jobs that I wasn’t qualified for or interested in, such as SEO, admin and social media. I felt I was given the tasks the owner wasn’t willing to pay someone with expertise to do. I used my initiative to take what I could from the experience, but with no classes to attend and not many yoga based activities, it was tricky.

I was then informed the yoga teacher would take her annual leave half way through my experience, so there would be no yoga at all. Because of this I changed my flight at expense to me to leave earlier.

I would like to add here that I attended in low season at the hotel (November & December), and I believe the experience would be totally different again with warmer weather, guests, active retreats...

Unfortunately the vibe of the resort and staff at the time of my stay was very, very low. It is quite the opposite of the positive ‘Zen’ atmosphere that was sold to me via the ad. Staff are shouted at and spoken down to daily, privileges removed constantly, and the managing and directing staff apparently have a very obscured view of their own entitlement and status as human beings. The divide was large and oppressive. Staying on site I also saw how staff were expected to work on their time off etc etc

The staff food was poor and we were often given the same for lunch and dinner. You would struggle as a veggie on the current offerings.

Good bits: The area is pretty, and you have good access to Paphos, Troodos mountains, Blue Lagoon and other Cyprus sights.

Some gorgeous places to practice yoga and meditate within the resort., and so many fruit trees!

I stayed in the resort and had a lovely room to myself.

Lina is a star.
The key ‘on the ground running’ staff were ace, and it upsets me actually how under-valued they were. Educated, smart, hard working, funny and kind.
What the ‘big men’ of this resort don’t realise is that what’s impressive is not to just be intelligent and rich, but to have the ability to be kind.

This experience taught me how to be patient and try to see the good in all people and environments, and it showed me the sort of person I want to be given a choice!

If you go, go in the high season and confirm details before hand. But I recommend you go and work for someone who doesn’t just have money on his mind.

Gardening help at our historic home in Pembrokeshire, UK.
(29)

Come live in a quiet place in the countryside surrounded by animals in Normandy mountains, France
(1)

help in learning the language and in the garden. A family-run home with an ecological lifestyle. We bake delicious breads. Wroclaw, Poland.