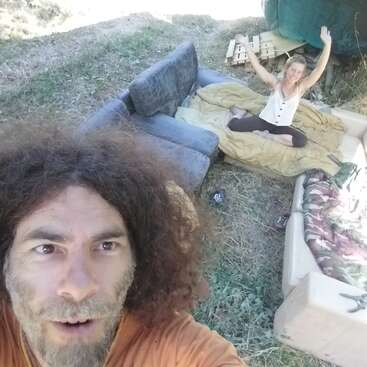 Comentarios escritos sobre este anfitrión (1)
21/11/2021
Dejado por el workawayer (Alexandre) para el anfitrión
Hello everyone!
I first met Paul when volunteering at a festival near his place. He quikly tagged along the crew to help mount the festival´s structures and you wouldn´t how amazing it was to follow his teachings on sacred geometry building. We ended up creating this massive 10 meter high dome made of bamboo and it turned out so beautiful!!… read more
Having the opportunity to work with him for about a week I got to know how human and friendly he is and a lot of his history and the awesome plans he has for the future. Also I visited his land when he was starting out this project and it is such a gorgeus place with so much potential...
Paul also told me about all the injustice and and all the bureaucratic bullsh*t he has been through when trying to buy the land, but he made in the end! He´s now very determined and always positive! that is why I really see his dream becoming real in the near future.
I am planning on going there and help soon, having my expectations high!
If you like to be in touch with nature, natural building and sustainability, you will absolutely love this place, and I´m sure you will learn a lot with Paul!
Lot´s of love ❤️❤️

Stay with us in a wee cottage and help with horses on the Knoydart peninsula, Scotland

Help me with my home improvement projects in the forest of Beasley, Canada
(1)

Happy family looking for help of Castellane near the High Provence Alps, France