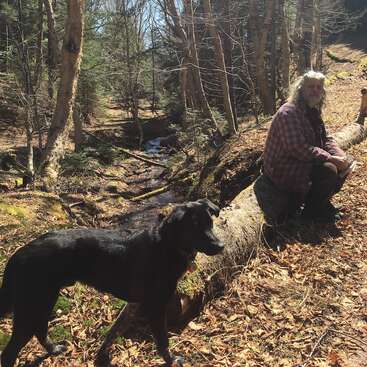 Comentarios escritos sobre este anfitrión (13)
21/11/2019
Dejado por el anfitrión para el workawayer (Linda)
Linda came to Parrsboro for only a short time but it was a great time. She is enthusiastic, curious, and open. She also comes with many skills and a willingness to not only jump in and do whatever needs doing but is a woman who takes initiative and looks for ways to help. Linda is also kind and fun to spend time with and talk to. We hope she will… read more visit us again.
(Excelente )
07/11/2019
Dejado por el workawayer (Linda) para el anfitrión
This was my first Workaway experience and I have to say I was a little anxious about it, but Judith and Harvey set me at ease from our first meeting. I appreciated being included in some fantastic meals at their place and meeting some interesting people. Judith and Harvey were very caring and concerned about how my stay was going. I have… read more absolutely nothing but good things to say about my experience here. It is a beautiful piece of Canada. Being able to take the film festival in was a bonus. I will never look at a decaying/stressed tree the same way again.....Judith has me hooked on hunting for oyster mushrooms!
I look forward to returning if even for a visit.

Solo puedes ponerte en contacto con workawayers con membresías activas.
(Excelente )
24/09/2018
Dejado por el workawayer (Giulia) para el anfitrión
I spent a very nice time with Judith and Harvey, they were very welcoming and helpful. The centre they run is very interesting and I appreciated their will to value art, culture and simple living. Moreover, they cook amazing vegetarian food and I am grateful I could stay at their beautiful cottage in nature. I also had plenty of time to explore… read more the area of Parrsboro, which is absolutely impressive and people there are incredibly friendly.
Solo puedes ponerte en contacto con workawayers con membresías activas.
(Muy Bien )
16/07/2018
Dejado por el workawayer (Diego & Patricia) para el anfitrión
We can give more stars to this couple, but the trust is Judith and Harvey are amazing people, for reall. They´re kind, worried and very intersted in know and learn different stuff from different people. We stayed there for 2 months but it felt like we´re living there for years and they treated us like we´re family and that´s the most amazing… read more felling you´re gonna ever feel in these days. They super humans, they always have something to tell you, something to cook you (omg, it´s the best food you´re gonna try if you´re interested in very good food of course) or something to share with. They´re an amazing couple and make you feel like you´re more than just a volunteer. And the best thing, they really enjoy the workaway experience and always are gonna be happy to know about you, your family, your trips, etc.

If you want to spend some time in a small town, with beach and calm time, don´t think to much and go to Parrsboro, Harvey and Judith are going to give you the best time of your life, they always are bringing people from all the world and they have good friends that cosntantly visit them.

We want to come back, for sure, this kind of people you don´t find it in this day.


Solo puedes ponerte en contacto con workawayers con membresías activas.
(Excelente )
20/06/2018
Dejado por el anfitrión para el workawayer (Diego & Patricia)
Pati and Diego stayed with us for only 2 months. Our only regret is that the time went so fast. They were a pleasure to have around and are the kind of people who are interested in everything and everyone. Both approach every task with enthusiasm and a commitment to do their best. Both are kind, intelligent, and open. Though sad to see them leave,… read more we are excited to see them continue their adventures and know they will make many new friends and touch many lives.
(Excelente )
24/08/2017
Dejado por el workawayer (Keylaira) para el anfitrión
Judith and Harvey offer many opportunities at their bohemian, yet sophisticated, arts establishment situated in a small, unique and friendly Maritime town. This interesting and eclectic workaway site offers a variety of jobs that you can sign up for with no set hours, so there is ample time to do some of your own artwork and/or explore the area.… read more Judith is kind and thoughtful - always keen to support your own creativity and to make sure you have the opportunity to see the local natural wonders, which are abundant.
Solo puedes ponerte en contacto con workawayers con membresías activas.
(Excelente )
17/08/2017
Dejado por el anfitrión para el workawayer (Keylaira)
Kaylaira is a marvellous person with the energy of ten! We feel privileged to have had her here and are grateful for how much she offered, the huge amount she accomplished, and the good nature and open attitude she brought to all. We look forward to crossing paths again.
(Excelente )
17/08/2017
Dejado por el anfitrión para el workawayer (Alexis & Daly)
Alexis and Daly were a real delight. They are an intelligent, kind, and caring young couple and we’d be happy to host them again. They worked hard and worked happy. They participated well in the life of our centre and engaged with the other guests and with the community. Both have a healthy curiosity and interest in the world around them and they… read more are generous with their talents.
(Excelente )
17/08/2017
Dejado por el anfitrión para el workawayer (Alisa)
Alisa is a treasure. She is intelligent, positive, has a great sense of fun, is generous with her ideas, knowledge, and skills, and her cooking is divine! She cannot return soon enough!!!
(Excelente )
17/08/2017
Dejado por el anfitrión para el workawayer (Gabriel )
Gabe is a delightful and talented young man. He is positive, hardworking, and knows how to take initiative. We are grateful for his ideas, follow through, and how much he accomplished during his stay. We were also privileged to hear his poetry at one of our poetry evenings and to listen to his music and singing… now looking forward to hear about… read more his successes!
(Muy Bien )
17/08/2017
Dejado por el anfitrión para el workawayer (Silvano & Peggy)
Peggy and Silvano, it was an absolute pleasure to have you here. Thanks so much for everything you did and for your good nature and sense of fun. Thanks also for visiting again on your way back through… our only complaint is it was too short!! Enjoy yourselves and once in a while please send us a little news of your adventures.
(Excelente )
08/01/2017
Dejado por el workawayer (luc) para el anfitrión
Parrsboro is a very pleasant to stay, with the post office in the middle of the town. Judith & Harvey are very interesting people, who have very good insights to give. Our job consisted of finishing up cleaning a apartment & general maintenance in the post office house. They invited us to different dinners & shared some unique experience with… read more people of the community. It has been a very unique experience. Thank you
Solo puedes ponerte en contacto con workawayers con membresías activas.
(Muy Bien )
08/01/2017
Dejado por el anfitrión para el workawayer (luc)
Luc made our first experience as workaway hosts a great one! He is very good natured, helpful, hardworking, and interested in learning and getting to know about the people and place.
(Excelente )
Para comentar, asegúrate de iniciar una sesión y estar online.
Seguridad Web
Número de referencia de anfitrión: 141587835655
Alojamiento con familias, voluntariado y vacaciones trabajando en CanadáAlojamiento con familias, voluntariado y vacaciones trabajando en América del NorteAlojamiento con familias, voluntariado y vacaciones trabajando en Nova ScotiaOtros CanadáÚltima hora Alojamiento con familias, voluntariado y vacaciones trabajando en Canadá
Para ponerte en contacto con un anfitrión, inicia una sesión con tu nombre de usuario y contraseña o regístrate en workaway.info.
Mi lista de anfitriones0
Regala Workaway
leer más

Learn to live off grid in in Yukon, Canada

Experience the rich cultural heritage of Gascony in South West France whilst helping us restore our home and gardens to their former glory.

Housesit at Christmas with animals in a rural area near Carcasonne, France
(1)