Stay and help with my dogs and around the house near Cádiz, Spain 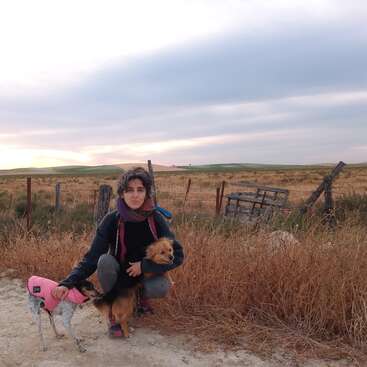 Comentário feito pelo e sobre o anfitrião (5)
02/09/2020
Deixado pelo Workawayer (Nele) para o anfitrião
I stayed with Carmen for almost two weeks and I had such a great experience working with her . She's a very kind and nice person who helps you as much as she can with everything. We laughed a lot ( in a "horrible, awful and terrible way" ;) ) and had very interesting and nice conversations. I learned a lot about Spanish culture and food as well… read more .Carmen showed me Olvera and cities near by . She even invited me to go for a little camping trip to Almería! Her dogs are just super cute and I miss pastoras cute behaviour. My works were mostly practicing English with Carmen , caring for the dogs and cleaning the house a little. I wish I could have stayed more with you ! Thank you so so much for everything and I would be very happy to meet you and your dogs in the future again 😊💓
Só é possível entrar em contato com Workawayers com assinaturas ativas.
(Excelente )
26/08/2019
Deixado pelo Workawayer (Emeline) para o anfitrião
I had a very nice trip with Carmen and her niece in Olvera, we shared many things, cooking, walking with the dogs, speaking and singing,Carmen was a really great host, always taking care of you, i d like to thank her a lot for all she did for me (like making me visit great places, meet nice people, giving me very good pies and olive oil for my… read more parents) and tell her she's welcome whenever she wants in my place
Só é possível entrar em contato com Workawayers com assinaturas ativas.
(Excelente )
31/07/2019
Feito pelo anfitrião para o Workawayer (Emeline)
Emeline is a wonderful girl. She is very nice, she always has an smile. She always is disponible to help. She cooks very well. I wish we will meet in the future, so I think she is a good person, and I think she can be a good friend.

(Excelente )
27/02/2014
Feito pelo anfitrião para o Workawayer (Hannah)
Hannah was a nice and wonderfull girl. She is very polite, she adapts very well to all. She is very friendly and funny. We shared musical tastes and movies. She help me a lot. She is quiet and respectfull.
I was happy with her at home.

Help us to renovate some rooms and create a permaculture garden at our 250-year-old house in Aizanville, France
(6)

Fun times in the town of the Blue Mountains a 4 season recreational area of Ontario, Canada
(16)

Join me on my farm in the countryside of Caqueza, a little town en Cundinamarca (Colombia)
(5)