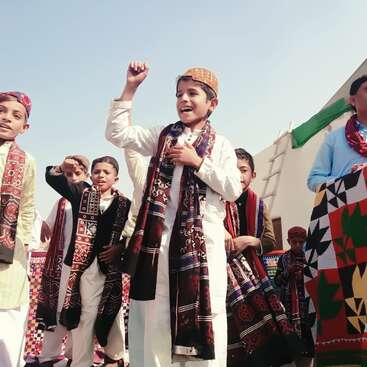 09.04.2022
Laissé par le workawayer (Lina) pour l'hôte
Ikram and his family live on Pakistans countryside. It was amazing to come there and experience the lifestyle outside of the big cities. A traveler like me doesn´t get this unique experience every day.
This family is a true gem. I got to know the whole village in a few days, everyone was eager to meet me and I was really happy to meet them too,… read more since everyone was lovely. Unfortunately I don´t speak Urdu, therefore the communication had to work with hand and feet, since kram is the only one that knows English really well.
On the free days Ikrams family took me out for beautiful trips to other towns, one time his father showed me around on a walk. I really enjoyed this.
I will miss these open hearts!
Hope to see you again one day.
Until then, stay safe and all my best wishes!

(Excellent )
24.11.2021
Laissé par le workawayer (malvina) pour l'hôte
Nizamani 💚🤍. <>
After 7 months and a half traveller for Pakistan, in my last days I was lucky to reach the interior of Sindh and meet the villige, family and the beautiful schools of Ikram. Ikram picked me up from the Hyderabad bus station and there my experience began ...
Each school there are many students from Hindu communities and also from… read more the Village. The children were surprised and perhaps they didn't understand my reason for visiting that country, their school. I remember their faces, dresses, teachers in all the schools in Pakistan, even in the Ikram schools. The behavior of the students is excellent and envy."It was an experience that I will keep in my heart and in my retina forever."
Ikram's family is very warm, Ikram's parents are open-hearted people, they were always present and attentive that I didn't lack anything.
In the afternoons we went out for a walk with Ikram's father, Mohammet, through the sugar cane fields, I loved walking around those places and visiting the communities at
Hindu. I can really thank each moment lived in Nizamani, we also had some problems that we could solve easily.
It was one of the best experiences in Pakistan. I will be eternally grateful 😊
Gracias Ikram y gracias por ayudar a todas esos niños a conseguir un futuro mejor.

Come and help with our permaculture and meditation project near Kortrijk-Gent, Belgium

Help develop a permaculture project and garden by the river in Percé, Quebec, Canada

Help in Donegal-We would like people who can put their hands to any type of tasks such as gardening, general maintenance- Ireland
(6)