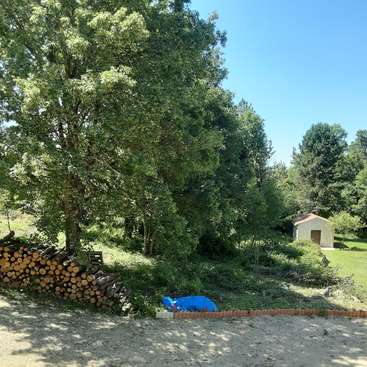 01.08.2020
Laissé par le workawayer (Steve & Angela) pour l'hôte
Many thanks to Tania and Julian for having us as workaways, we had an amazing time with fantastic people. The work was interesting, manageable and flexible, we were able to spend days working together, or apart, coming together to share the days experience over the invariably excellent evening meal. From scything a path to realise Julian's vision… read more of Woodland Way to painting the lovely garden chapel to tending the vegetable beds it was a pleasure. We were taken to local towns and weekly markets, meeting friendly locals and very relaxed expats. We cannot speak highly enough of Tania and Julian, and their wonderful dogs Honey and Sabe. We are already looking forward to calling in on them on our return trip.
Vous pouvez seulement contacter les workawayers avec une adhésion active.
(Excellent )
30.07.2020
Laissé par l'hôte pour le workawayer (Steve & Angela)
Steve and Angela spent almost 3 weeks with us, leaving this morning. What a fabulous couple they are! Extremely respectful of our home and our daily lives, fitting in with our routines and quirky ways. They work well as a team, however some jobs they were asked to work solo on and this didnt phase them at all. Both are very hard working and love… read more to see jobs done to completion. They were able to listen to our plans, add to them with ideas and then work through getting everything asked of them done to a high standard. Evenings were a pleasure to sit and enjoy a meal and a chat, afterwards spending the time with us or on there own. We really dont want them to leave, but know there adventures will be amazing and whoever gets them as workaways next will equally not want to let them leave. Good luck, stay safe and we are already missing you!
(Excellent )
10.11.2019
Laissé par le workawayer (David) pour l'hôte
Tania and Julian are a kind and lovely British couple who recently moved into a large house in the small hamlet of Le Chillou, with their two dogs, Honey and Sabi. Julian speaks French and English and German, Tania speaks English and German.
As they have only been in their new house for a few months, there are lots of jobs to be done; painting,… read more decorating and gardening. Also needed is help building a woodshed, installing a lowered ceiling in the downstairs bathroom and converting the old chapel space, so it is not difficult to fulfill your five hours and your work will be varied and interesting.
Tania and Julian have a number of English friends in the area, who they often spend time with and who will happily share their knowledge of both England and France. - probably best to just not mention Brexit!! ;) -
Tania runs a wonderful soap and cosmetic business from the house. She is always happy to share her knowledge of the craft. I was very interested in the information she shared about setting up her businesses in France and Germany.
Additionally, Tania’s cooking is fantastic. If you have never had a good British meal like steak pie or a fry-up, you are in for a real treat. Vegans need not apply!
TV time and board games in the evening were very enjoyable and I hope one day to be good enough to beat Julian at Scrabble.
Thank you both for your kindnesses, honesty, and open communication.
I wish you and all your family health and happiness for the future.
Regards David.
———//———
A note to any future Workawayers;
you must be comfortable with, and enjoy the company of, big dogs if you want to stay with Julian and Tania. Both dogs are lovely and not at all aggressive; Honey is sweet and intelligent (Labrador sized) and Sabi is a gigantic fluffball who will pretend he doesn’t understand a word you are saying... don’t be fooled... he does. ;)

Vous pouvez seulement contacter les workawayers avec une adhésion active.
(Excellent )
10.11.2019
Laissé par l'hôte pour le workawayer (David)
David stayed with us for 3 weeks, in that time we found him to be extremely work conscientious, giving many, many more hours that he needed, to fulfil his obligations. He decorated a bedroom making it a pleasant room for other workaways to stay, even down to stripping back the door hinges. Some of the other projects (I haven't mentioned all)… read more were....... An old wooden pipe box was left, David soon found use for it and turned it into a herb and flower box, filling the base with stone from the garden, then top soil. 8 shutter doors were stripped back and returned to their former galore. Tiling, woodwork, painting, gardening were all done to a high standard. David also became good friends with our two big dogs whom I am sure will miss him and his training treats greatly. We were also treated to a couple of lovely meals cooked by David, which were very tasty and greatly appreciated. If David is given instruction to a complete a task he will follow it to the letter or given a project for him to sort himself he will happily fulfil the task. David was our first Workawayer and has taught us many useful things to hopefully make others' stay welcoming. Take care on your travels.
(Excellent )
Pour laisser un feedback, il faut se connecter et avoir activé son compte.
Sécurité du site
N° de référence hôte : 781688946278
Séjours chez l'habitant, volontariat et vacances-travail : destination FranceSéjours chez l'habitant, volontariat et vacances-travail : destination EuropeSéjours chez l'habitant, volontariat et vacances-travail : destination Poitou-CharentesIndividu FranceLast minute Séjours chez l'habitant, volontariat et vacances-travail : destination France
Connectez-vous avec votre identifiant et votre mot de passe ou inscrivez-vous sur workaway.info pour contacter les hôtes.
Mes hôtes préférés0
Offrez Workaway en cadeau
en savoir plus

Help us renovate our farm animal sanctuary in Trets, France
(1)

Our home is beside the oldest neolithic farm settlement in Europe, Ireland
(3)

Help with the home and children in Tuscany, Italy!