Help with English practice and around the house in Acqui Terme, Italy 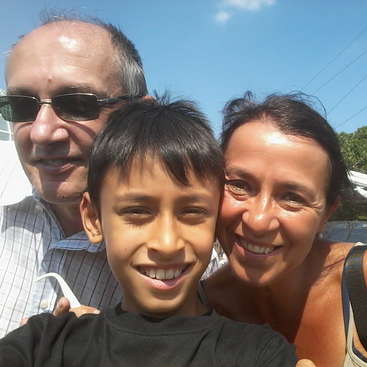 Feedback laissé par et pour l'hôte (4)
17.09.2017
Laissé par l'hôte pour le workawayer (HuiLi)
We have had a really fantastic experience with “Sissy” (we have always used her English name as her Chinese one is more difficult to pronounce)! She has been so helpful in the house doing some housework, gardening and helping our son with his English and cycling and walking with him. She has become in such a short time (one week) an important… read more person to us becoming spontaneously a member of the family. We have indeed empathised a lot. She has been genuinely interested in us, showing her true friendship. She has taught us some yoga techniques and she also showed me some breathing exercises to improve my singing. We have a lot in common, for example the passion for music! She is a very good opera singer and I enjoyed her singing while here so much! I wish I could be singing like her! We thank her for sharing things with us and spending quality time with us! She also cooked a delicious Chinese rice noodles dish that we enjoyed a lot! We hope she will be able to come again soon. ‘Thanks so much “Sissy”! Thanks for your caring and useful advice! We miss you!’
(Excellent )
15.09.2017
Laissé par le workawayer (HuiLi) pour l'hôte
Genuine and generous people are not easy to find, the moment you find them, you know it. One week stay with this warm-hearted family really is really refreshing. They treated me sincerely as one member of the family, they give me the best bathroom in the house and the best food that l've ever had in Italy ! I helped Emanuel with his English a bit,… read more we got long very well, we did cycling, walks andjuggling! a bit of work in the garden, a bit of cleaning. the work they ask for is so fair and light, and they are not calculating people at all. I also give Cinzia some advice on singing and Yoga, for everything I do, I received instant approval and appreciation from them.
Cinzia is an amazing cook, she always give priority to my allergy and taste. The mussels, fish, and soup are splendid! Generous, down-to-earth, contagious laughter, and fantastic English) we are connected!
The Father is such a loving soul, he takes care of everyone in such a gentle and generous way. A brilliant cook as well,(I miss your grilled chicken with finely chopped celery) he makes sure that We got red wine and grapes everyday! He even took time out to show me around. He drove five hours to pick up Francesco from the Airport, after a whole day' work, a dedicated and devoted father ! Francesco, a polite youngster, interests in English conversation on every subject!
They are my another loving Italian family now! See you soon!

(Excellent )
21.05.2017
Laissé par l'hôte pour le workawayer (Deborah)
Our experience with Deborah has been excellent! We appreciated her so much! She is really nice, kind, patient, open minded
and cheerful. She's been great helping our child both with English an Spanish. She also exchanged ideas and experiences with us and with our elder child, showing interest and curiosity about other cultures. We particularly… read more enjoyed cooking traditional food, we tried and make traditional Piedmontese dishes to offer her
while she cooked Chadian and American dishes for us (our younger child particularly enjoyed them, he is usually a bit fussy about food though!).
She's been very patient when studying with our little son and we really thank her for that! I also appreciated her presentation of Chad and Texas at my school with my students!
She always tried to be more than
helpful with everyday housework!
We really hope she'll be coming back soon!
Thanks for coming Deborah!

(Excellent )
17.05.2017
Laissé par le workawayer (Deborah) pour l'hôte
Wonderful stay. I stayed for three and a half weeks with this family and had a great time. I felt part of the family and took part in many of the daily activities. This is a very caring and open minded family. They took the time to show me different places. I learned a lot about the history and the gastronomy of the region. I helped with some… read more English and Spanish homework, and some cooking. We enjoyed interesting conversations, sharing our cultures and learning about other cultures in the world.
They are now my Italian family and I look forward to seeing them again in the future when I return to Italy.

Come and join me in a nice corner of Aquitaine to help with house projects in Aquitaine, France
(12)

Learn to re-build a traditional farm, speak french and enjoy the peaceful country side in the Gers, Midi Pyrenees, France
(2)