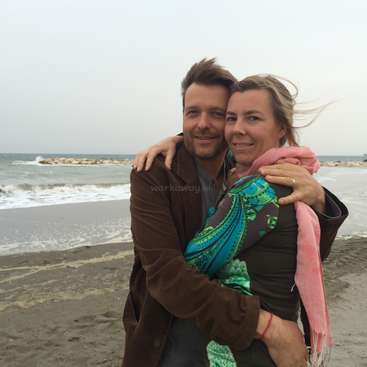 14.01.2022
Laissé par l'hôte pour le workawayer (Jasper)
Jasper was a great asset to our project. He got involved in anything we asked of him, from hempcreting, gardening, to cooking, cleaning and babysitting. He was very easy going and interesting and easy to talk to.
He was dependable and had a good work ethic, got up early to get to work and was fun to work with.
Showed great interest in our project,… read more in our lives and our work.
Overall a great experience. Highly recommend him to anyone!


(Excellent )
26.11.2021
Laissé par le workawayer (Yasmin & Tara ) pour l'hôte
I had a great time with the Family, I felt very welcome from the beginning. I only stayed two weeks but I could have a insight of the wonderful project. The work was easy-going and fun. Especially with the kids 😊 Sleeping in the yurt was an amazing experience, such as cooking outside and doing self made pizza. I am grateful for the time there and… read more would come back one day. Thank you Marjolein, Stephen and family!
(Excellent )
24.10.2021
Laissé par l'hôte pour le workawayer (Yasmin & Tara )
Hi! Tara was here alone, not with Yasmin. She joined up with Ferran and they both stayed in the yurt. It was great to have their enthusiasm fill our project again with new life and new energy. We are very grateful for their input.
They were very organised, loving, curious and eager to learn.
While they were here, they worked hard, helped in the… read more house, with cleaning and cooking and looking after our little Ayla who really took to them. We enjoyed some nice meals together.
They helped with all kinds of jobs on the project, but mostly they sorted out the watering system, which was vital! Furthermore we planted for the next crop.
We wish they could have stayed longer but other opportunities were awaiting them!
All the best for the future. Marjolein & Stephen


(Excellent )
18.10.2021
Laissé par le workawayer (Magdalena & Vít) pour l'hôte
Our experience with Marjolein and Stephen was amazing, unfortunately, we only could stay for two weeks, but we still learned a lot! Sleeping in the yurt was fun and very unique, we could also enjoy fresh and delicious vegetables from the garden right beside it. The project is really fascinating and inspiring, it is incredible how much effort do… read more Stephen and Marjolein put into it! It was so interesting to work on a project like that, we learned so many new skills. The work with Ayla was also fun, she is adorable and intelligent. The whole family was very welcoming and we truly had a great time, we really miss those beautiful sunny days. Thank you for everything!
(Excellent )
07.10.2021
Laissé par l'hôte pour le workawayer (Magdalena & Vít)
Magdalen and Vit were a great, adaptable and lovely couple to have. They were hard working and eager to learn. We had some nice times having meals together and they were also great with our little daughter Ayla.
It was a short experience for them but I hope they got the most of it.
They helped building hempcrete walls, did the vegetable garden,… read more helped out in the house and anything else that we asked them to do. Really nice to have met them and wish them all the best for the future!

(Excellent )
05.05.2021
Laissé par l'hôte pour le workawayer (Katarzyna)
Kasia was an amazing workaway. We were not really ready to receive our workaway'ers as they arrived a few days early, but from the moment she arrived she improvised and worked with whatever was available to her and was very creative.
Especially her cooking is amazing and slowly we merged our cooking styles. Every time she created something… read more special and very tasty. She was very independent, came up with the menu, did the shopping and the cooking.
She also did a bit of cleaning every day, just to keep everything up-to-date. I never had to really give her instructions, she found her own way in the house.
Our 2 year old loves her! They got on so well. It was amazing for me to have someone completely integrating in our household and not feel invaded in any way, yet the opposite: it enabled me to focus on my work and left me carefree for the first time in 20 years!
Also, Kasia is very gifted doing treatments, and we also experienced those from time to time, giving us much needed relaxation of body and mind.
Thank you Kasia for giving us this precious present of your time and dedication to our family!


(Excellent )
07.03.2021
Laissé par le workawayer (Katarzyna) pour l'hôte
Living in the Mongolian jurt with a seaview is amazing and healing for the soul :)

I stayed on this project for 6 months, with a friend. We met lots of super nice people, during the weekends friends of Marjoline and Stephen come over to help on the project. There are many foreign people here so it's works even if you don't speak much Spanish.

La… read more Herradura is a very special place hidden in a bay. It is a small town but feels like a peaceful village. Nice bars, some shops, plus everything is in a walking distance.

On this project I mostly helped Marjoline with daily organisation: shopping, cooking lunch and cleaning their house (which is a 10min walk from the jurt, in the village). For me it was flexible enough, one of the workaways where instend instead of counting the working hours I just did what was needed.

Working with Marjoline is a pleasure, she is kind and easy going, treats you like a friend from day one.
3 children stay in the house in th village, I helped out with Ayla, who is 2,5 years old. Very free soul who loves her walks and a beach playground.

The jurt is very comfortable to sleep in, there is cold running water, you can shower in the house. Stephen and Mikael build a lovely outdoor kitchen, there is even a pizza oven. Electricity is limited, but enough. Gas heater is there to keep you cosy and warm during colder evenings. You can enjoy local vegetables and get spring water from a nearby village.

Thank you for this experience, it was totally unique! I wish you all the best with your house and project, Kasia


(Excellent )
29.03.2021
Laissé par l'hôte pour le workawayer (Mikael)
Mike has been an amazing asset for our project and has been with us from day 1, even before the yurt was up! It was very rough for him and Kasia, but he took everything in his stride and helped set up the outside kitchen, the yurt, the lay-out of the permaculture space around the house. He is creative and skilled and has a lot of his own tools. He… read more is easy to get along with and is also able to work independently.
He has also been in charge of more junior workers on site and has proven to be very patient and kind.
He has now been with us for over 6 months and we really got to know him and hope he stays around and keeps on being involved in the project!

(Excellent )
04.03.2021
Laissé par le workawayer (Mikael) pour l'hôte
Stephen and Mariolejn are a marvelous couple. During my stay here I was working mostly with Stephen and I can tell we have managed to be a great team! Very good learning experience - I had opportunity to mix hempcrete, lime mortars, build outdoor kitchen, lay many wooden stairs and many other activities. We became good friends and also it feels… read more like being the part of a big family🙂

Help with an interesting restoration project on a pretty farmhouse in Haute Vienne, France

Join a musician with his garden project in Nordsjælland, Denmark
(16)