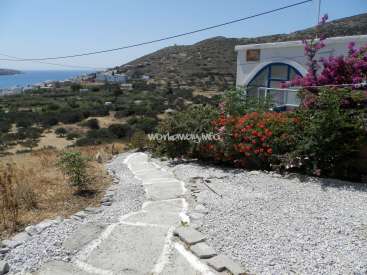 The office and bedroom

The room for our cats

02.10.2020
Laissé par l'hôte pour le workawayer (Loic)
Τhank you soo much Loic and I hope to see you again in Amorgos. Loic was always willing to help at any time and he was a fast and eager "student", he was offering a great help for us and for the animals. Loic is a gentle, calm person who all our animals loved to be with.
It was a pleasure to work with him and also to go out as friends. If you are… read more considering hosting Loic you will certainly not regret it. Loic if you want to visit Amorgos you will always have a place to stay.


(Excellent )
01.10.2020
Laissé par le workawayer (Loic) pour l'hôte
I could not have asked for a better first experience with workaway. I stayed a month there and not only was Amorgos the most beautiful Island I have seen, but Litsa and the other volunteers were so welcoming. I felt quickly at home there and the animals and the people both captured my heart. The work was easy and fun, and it left a lot of free… read more time to hike, explore or just enjoy the villages and the sea. Litsa was always there if I needed anything or had questions.
I could not recommand it more. Honestly, one of the best experience of my life.

(Excellent )
12.09.2019
Laissé par l'hôte pour le workawayer (Pascale)
Pascale was a great help for us and for the animals. She was always willing to help at any time and she was a fast and eager "student". She was spending more time than she was obliged to do with the animals. Achileas the almost blind kitten became much more social because of Pascale. Pascale has a gentle, calm character which is ideal for animals.… read more

It was a pleasure to work with her and also to go out as friends. If you are considering hosting Pascale you will certainly not regret it. I hope to meet you again Pascale, you will always have a place to stay here in Amorgos.


(Excellent )
11.09.2019
Laissé par le workawayer (Pascale) pour l'hôte
I worked with Litsa and the animals for almost five weeks, I started in August. It was my first workaway experience and I didn't have any expectations at all. Surprisingly I had a wonderful stay in Amorgos. Litsa is a generous, funny and gentle character, she will help you with everything you might need and she will show you how to work… read more professional. You'll feel at home very fast and you will feel more as a friend to Litsa than actually working for her.
Despite the announce said volunteers won't get food provided, Litsa has given me a lot of fresh eggs from her chickens and also a lot of vegetables from her garden which was really nice.
The work was not much, as in the period I stayed at the center we didn't have a lot of cats to take care of. I spent about two hours in the morning with cleaning, feeding and caring for the cats and in the afternoon about one hour for walking the lovely puppy. I loved working there, because you really can make a difference in the animals lifes, you see the animals are getting better and you can be a big help for the centre and of course for Litsa.
Despite of work- Amorgos is a very beautiful, unique and calm island with generous and friendly people. If you like nature it's perfect for hiking, swimming and exploring. You'll have a lot of time to see everything you're interested in.
If you think about coming here give it a go, you surely will not regret it!!
Thank you Litsa for making my stay amazing and we'll certainly meet again one day-
all luck to the animals and my all time favourite Achileas

Vous pouvez seulement contacter les workawayers avec une adhésion active.
(Excellent )
10.11.2018
Laissé par le workawayer (Jeromine) pour l'hôte
I spent a month volunteering here at the shelter as my first workaway experience and I am delighted to have spent it there! The work is very rewarding, knowing you can make a difference in the animals' lives is a precious gift. Litsa is easy going and will help you with everything you might need, she will show you how to administer medicine or… read more simply how to be more efficient in the daily tasks. As the island has no vet, the organization relies on Litsa to take care of the stray animals of the island, and that is a big task! The organization is in need of some support, and I would recommend anyone who loves animals to come and help. As it stands, somebody with fundraising experience (to fundraise the annual sterilization program) or somebody who is studying to become a vet would be great assets also. Thank you Litsa for a wonderful experience, I hope to be back one day!
Vous pouvez seulement contacter les workawayers avec une adhésion active.
(Excellent )
08.11.2018
Laissé par l'hôte pour le workawayer (Jeromine)
Jeromine spent two weeks with us and it was a pleasure to have her here. She looked after our rescued animals with great care and she was very efficient and organised. It was wonderful for us that we could give her instructions and know that she would complete all tasks to a high standard. She really cared about the animals and it showed.
(Excellent )
08.09.2018
Laissé par l'hôte pour le workawayer (Adele)
Adele was indeed not working for us, but we got to know her and can guarantee she is a very intelligent and hard-working person, always content with what she had and always eager to learn more. We wish her all the best in the future.
Yiorgos and Litsa

(Excellent )
08.09.2018
Laissé par le workawayer (Adele) pour l'hôte
While I was not helping directly with the animal rescue center, I helped on the adjacent orchard and farm and so had lots of contact with animal rescue international. They are wonderful, caring people, with a huge job of caring for a attempting to sterilize and keep healthy the many many cats on the island, in addition to work with other animals.… read more They are flexible and working in a beautiful place, doing important work.
Vous pouvez seulement contacter les workawayers avec une adhésion active.
(Excellent )
14.09.2016
Laissé par l'hôte pour le workawayer (Inmaculada)
Our wonderful volunteer, Inma Salvat worked with us for three weeks in August and she quickly developed a rapport with our animals. A dedicated volunteer, Inma stayed beyond her shift hours and even worked on her days off and we know that all the animals she will help in the future will be touched by her calm and gentle manner.
We really… read more recommend meeting, working and sharing experiences with Inma.
We are grateful for our very special time with Inma and wish her a long and fruitful career as a vet.
Thank you Inma!!

(Excellent )
12.09.2016
Laissé par le workawayer (Inmaculada) pour l'hôte
I really recommend meeting, staying and sharing experiences with Litsa and her incredible animals and environment.
Amorgós is just a piece of hidden heaven in the middle of the sea and Litsa is an angel who takes care of the stray animals of the island.
Thanks to here, with Paola leading it and to all the volunteers that help the organisation a… read more lots of programs and improvements are being developped for the animals in the island.
Working with them is so easy and nice that you feel like home from the first moment. Litsa picked me up at the port and during all my time there she was the best host I could ever had. She finished being a good friend.
The work there, if you like animals and you do it with Litsa isn't even work, you easily get use to the calmly and pure lifestyle of the island and develop an immediately sense of love for all the creatures in the island (and of course the ones that you take care of daily).
You have a lot of spare time and lots of places to visit that you will adore if you like nature as me.
I would absolutely come back and I recommend people with veterinary studies to go and help Litsa and the others volunteers.
Many kisses to Litsa and all, I wish you all the luck of the world, you deserve that and even more!

Help out around our organic farm on the Sicily hills, Italy
(11)

Help at an off-grid hobby farm near Gravia, Greece
(2)

Aupair help with a beautiful Italian family in north Italy
(1)