Come plug in and be part of our family, as we work, play, eat, and fellowship together in Honduras 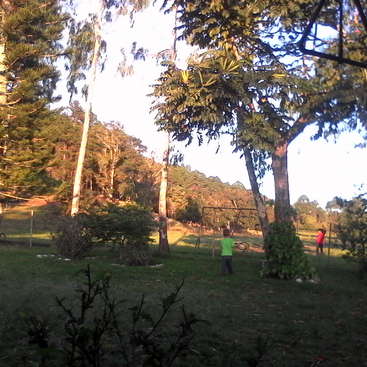 Their farm is full of people, animals, nature and love. I saw that deep human connection that I haven't seen in a while. Forget the TV and phones and just plug with other people and connect. Their farm is big and full of opportunities. I didn't really work there but if you… read more like farms and being busy, I am sure there is a lot you can do and help in the farm!

Thank you and your family! Say hi from me!

Mr. Johnie and Ms. Vicky thank you a lot for all the things you did for me, for make me feel at home until I said "see you later" thank you for open me the gates for your little piece of paradise.


Vous pouvez seulement contacter les workawayers avec une adhésion active.
(Excellent )
20.04.2018
Laissé par le workawayer (Dylan & Jasna) pour l'hôte
We have stayed here for three weeks and really enjoyed it.
Johnnie, Vickie and their huge family are all so nice, welcoming and respectful. They are always happy and enjoy a good laugh. We stayed in a very cozy house just down on the property. The food was always delicious, we met a lot of nice people and they have a lot of cool animals. We would… read more definitely recommend it.

Join my family for rustic construction and eco projects on the beach of Manabi, Ecuador
(1)

Need help with some babysitting in Martinborough, New Zealand
(2)